NewsSpring 2022
Home›News›Not Your Father’s Game: With Two Facilities Newly Open and Callaway at the Helm, the Topgolf Explosion Comes to the Southland

Not Your Father’s Game: With Two Facilities Newly Open and Callaway at the Helm, the Topgolf Explosion Comes to the Southland

In the city of El Segundo, a newly developed municipal golf facility might very well be the path to golf’s future. At least that’s one way of thinking about the newly opened Topgolf Los Angeles – El Segundo, the first hybrid Topgolf facility featuring a traditional course as part of the overall development.

Formerly the Lakes at El Segundo, a popular 1,340-yard par-29 executive course with a not-so-exciting driving range, the SoCal muni has been transformed into a lighted 10-hole loop adjacent to a tri-level Topgolf facility that features 102 hitting bays, nearly doubling the previous course capacity.

Additionally, the ambitious $40 million Topgolf project features new community event and meeting spaces, as well as flashy entertainment and food and beverage offerings. Plus, the former nine-hole loop has an extra well-lit hole to play, highlighted by Topgolf’s trademark Toptracer technology, which allows golfers to see their tee shots being traced on monitors, just like you’d see on PGA Tour coverage.

“This is not traditional golf like our fathers and grandfathers would’ve known,” says Callaway President/CEO officer Chip Brewer, whose Carlsbad, Calif.-based company now owns Topgolf outright after a reported $2.6 billion acquisition a year ago. “It’s a lit golf course that has music and drinks. There’s Toptracer technology tracking shots and video screens. It’s a blast. And it’s right next to a new massive (Topgolf) venue that has a little bit of a Hollywood theme. It’s an event. It’s fun to be around and there’s a lot of energy. You’re not going to confuse coming here to your own private club.”

“Golf is evolving,” says Brewer, who took over Callaway in March 2012, after a successful 10-year stint as the CEO of Adams Golf. “I grew up around traditional golf and I love it. I caddied growing up; I worked in a golf shop; I played in college. And that game is a wonderful game, but it wasn’t growing very quickly, and it wasn’t very accessible.

“It didn’t appeal to large portions of our country or the world. What’s evolving, in addition to all the changes coming from COVID and remote/hybrid work life, is this whole new modern off-course experience.”

That “off-course experience” attracted 12.1 million participants in 2020, according to the National Golf Foundation, nearly equal the number (12.6 million) of participants who only played traditional on-course golf. The NGF study shows that 12.2 million people tried both forms of “golf.”

“It’s already as big as on-course golf in terms of the participation, and it’s going to be bigger,” Brewer says. “It appeals to a more diverse, younger and wider universe of people. When you look at modern golf, it’s a combination of the game that I grew up around and love, and this modern golf, which is Topgolf and Five Iron Golf and other avenues, such as Tiger’s putting venture (PopStroke).

“They’re all just broadening the reach and the interest and participation around the game. And they all kind of fit together to form one mosaic that is today’s golf.”

This new-look golf landscape certainly resembles nothing like the one the late Ely Callaway painted when he started his namesake golf equipment company in the mid-1980s and introduced his breakthrough Big Bertha oversized drivers. By the early 90s, after creating a successful line of Big Bertha irons, manufactured using an industry-first casting process, Callaway Golf had transformed the traditional club business.

Nearly 40 years later, Callaway’s namesake company continues to be at the forefront of innovation when it comes to designing golf equipment. But now, the publicly traded golf company (NYSE: ELY) has even bigger aspirations for the industry. Callaway Golf not only wants to remain one of the leading equipment companies, but it’s also rolled out an ambitious plan to transform the very game itself through its growing Topgolf footprint. And the Golden State represents a high-profile presence for the Texas-based Topgolf team. 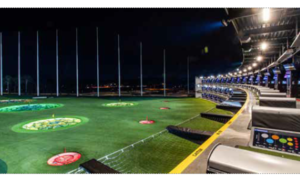 Opened in April, not only will Topgolf Los Angeles – El Segundo mark the first facility of its kind in the country, but it represents Topgolf’s foray into the golf-strong SoCal market. The company has opened a second facility, a 600,000-square-foot Topgolf in nearby San Bernardino County, after signing a 20-year lease with the City of Ontario in 2019.

To be sure, another important aspect of the growing Topgolf empire is the opportunity for Callaway to continue leveraging the different brands and products that this changing lifestyle-oriented company now represents. For instance, Callaway, whose full-year 2021 net revenue nearly doubled to a record $3.1 billion, certainly plans to sell more signature clubs and balls at their newest SoCal facilities.

But the company will also be showcasing its OGIO golf accessory product line after acquiring the company in 2017 and stocking shelves with its newly acquired TravisMathew apparel. This is designed to help Callaway officially evolve into a “premium golf equipment and active lifestyle company.”

For city officials in El Segundo, the new Topgolf facility is similarly a win-win solution. Not only does it preserve valuable green space for its residents, but it’s an opportunity to turn an unprofitable course into a potential cash cow.

The Lakes at El Segundo opened in 1994 and — run by another third-party operator — the 26-acre golf property had operated in the red in recent years — according to city officials in 2019, before the redevelopment plans had been approved, the city had been subsidizing the property to the tune of $275,000 per year. Now, city officials anticipate that the future Topgolf facility will generate more than $1.9 million in annual revenues and investments for the city’s General Fund and Golf Course Enterprise Fund, courtesy of the long-term lease deal signed with Topgolf affiliates.

From the perspective of SCGA leadership, the fact that El Segundo’s course had been preserved for another generation of golfers was a victory. Now, the multi-million-dollar question of whether Topgolf and other off-course venues can truly convert customers into future on-course golfers remains.

“The growth of golf entertainment is huge, and anything that can help participation grow is going to benefit us,” says Jason Knybel, SCGA assistant director of marketing. “And that facility specifically offers a lot of opportunities for juniors and those new to the game because it’s a smaller course. Also, being able to keep this facility in a densely populated area like L.A. County is a big deal.

“There’s not a huge amount of golf available in that area,” Knybel continues. “So it provides an opportunity for the people who were already utilizing that facility to continue to play there. And it gives these new golfers who may only have the experience of playing a Topgolf-type facility something right there so that they can experience … call it real golf. It’s a great transition and hopefully something that they see value in and find ways to participate in further in the future.”

Callaway and the rest of the golf industry are counting on it.

The Provisional Ball: What? How? When?