Bob Does Hollywood: The Hardest Working Man on Instagram Finds Gold in Golf

In the middle of his second round at the Waste Management Open this past February, two-time SCGA Amateur champion (2013, 2014) Beau Hossler heard an unmistakable voice from the gallery. “How ‘bout the torque out of Beau Hossler? Was there ever a doubt?”

Looking up from his shoes and grinning ear-to-ear, Hossler realized that the familiar voice belonged to a familiar face. “Is that Bobby Fairways?” Hossler responded.

“Bobby Fairways” is one of the many nicknames for 29-year-old social media influencer and golf personality, Robert Berger. And even though Hossler hadn’t formally met Berger at the time, he knew him from the internet. So did Joel Dahmen, Keegan Bradley, Tony Finau and a bunch of caddies —all of whom were delighted to cross paths with Berger in a video posted to YouTube and viewed a quarter of a million times (and counting).

In 2018, when Berger packed his bags and moved across the country from Randolph, N.J., to Hollywood, Calif, he had no idea that in four short years all his wildest dreams would be coming true. His cousin, Scott Berger, was already out West working in luxury hotels and had set him up with a management gig at the Beverly Hills Four Seasons. It was at this job that Berger would unknowingly line up his next one: serial content creator and paid golf influencer.

Saddled with the overnight shift, Berger would make comedy and golf videos during the day and then edit and distribute them at night. “My lunch break was at 3 a.m.,” Berger remembers. “The entire time I was on the clock I’d just be sending out my content to every social media channel you could imagine. I hated the graveyard shift, but it helped me because I could constantly work the side hustle.”

In today’s landscape, a content creator doesn’t have to wait for an audition or an interview. They don’t need headshots or an agent. And they don’t require the traditional resources of a studio and a camera crew. A smartphone and an internet connection grant everyone equal access to a worldwide platform.

But the internet is the ultimate meritocracy. Anyone can get 15 seconds of fame, but only the constantly compelling stick around, build loyal audiences and actually get paid for their efforts.

In 2019, Berger’s hotel guests started to recognize him from the videos he had put out under his wildly popular Instagram account, Brilliantly Dumb. The very next year, two major media companies simultaneously offered him full-time positions to make content for them.

“That’s when I was like, okay, there’s something going on here. I’m not going to be working in hotels much longer.”

And he wasn’t. Berger left the Four Seasons and took the job that allowed him to stay in Los Angeles making videos. During that time, he built a crew of recurring characters with names you’re far more likely to hear in Goodfellas than on a golf course. Joey Cold Cuts, the Jet, Beardown Cuz, Fat Perez and Nicky Chip & Putts round out a wickedly funny ensemble of ragtag golfers and gamblers who entertain half a million loyal followers on a daily basis.

Berger’s savvy resembles that of Adam Sandler and Johnny Knoxville. He’s the clear-cut ringleader of the circus, with his best friends acting as the sideshows. And everyone plays their role happily. “If one of us wins, we all win. I’d rather go broke with these guys than get rich without them,” Berger says with genuine conviction.

Chapter 11 seems a long way off. In 2020 Berger walked away from his guaranteed paycheck and bet big on himself. “I knew we could do it on our own. We had a following and we were in a position where could own everything we were making.” 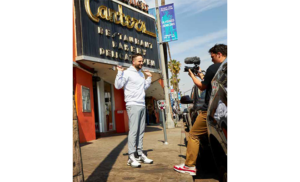 The bet paid off. As of this April, Berger has monetized YouTube, Patreon, TikTok and Cameo. He also has endorsement deals with Corona, Rhoback, PrizePicks, Pinned Golf and his own merchandise line.

One of the key components in trading in one paycheck for nine has been golf.

Two things in life are undefeated: Father Time and golf content on the internet. From memes to swing tips, shank montages to amateur driving range sessions, golf content of any genre generates massive engagement numbers across all social platforms. And it’s why Berger almost exclusively creates nothing but golf content for his YouTube channel, Bob Does Sports.

Bob Does Sports launched just eight months ago and has already surpassed three million video views. Despite the channel’s moniker, Berger isn’t doing sports. He’s doing golf. In one video he takes a lesson from world-renowned swing coach, George Gankas. In another video he challenges Joey Cold Cuts to split 18 shots of Fireball with him over just nine holes of golf. And in another video, Berger travels to the Ryder Cup and is recognized by name, on camera, by multiple fans and Tour pros.

Getting recognized by Tour pros is a common occurrence for Berger and his crew. They travel across the country to PGA Tour events and always film their experiences, often catching a player on camera name-checking Berger by his aliases and sometimes even reciting his own catchphrases back to him.

But it pales in comparison to visiting his parents back on the East Coast, going out to dinner and getting asked by fans for a picture. “My mom and dad have been so supportive of this entire thing without fully understanding what it is I do or how I make money. For them to see it working like that, it means everything, and it’ll never get old.”

Oh, it’s working, all right. Berger is bankrolling his entire life in Los Angeles from video content he creates for a rabid audience that can’t get enough.

While “influencer” can sometimes be synonymous with “insufferable,” Berger’s brand is undeniably endearing. His content is always self-deprecating, relatable and overwhelmingly positive. This positivity has yielded one of the gentlest and kindest comments sections you’re likely to ever find on the internet. Instead of toxic infighting amongst fans and followers, you’ll scroll past remarks of gratitude and encouragement. A truly nice change of pace online and a credit to the leader in the leader/follower dynamic.

Berger is also giving back to the game of golf by helping grow it. “A lot of people who watch our videos have told me they just tried golf for the first time. I love that. When I was growing up, if you played golf, it wasn’t viewed the way it is today. It was nerdy. Now it’s the one of the coolest things you can do. There’s a whole new generation taking up golf. And I think it’s awesome.”

This past March, Berger was back in the lobby of his cousin’s hotel. He wasn’t applying for his old job, and he wasn’t checking into a room for the weekend. He was meeting with the CEO of a gambling company who was seeking partnership. Four years ago, hotels were a place for Berger to edit videos during the graveyard shift. Now they’re a place for him to close business deals.

Not Your Father’s Game: With Two Facilities ...

Adam Hawk is an accomplished writer, producer and content developer with over a decade of experience creating written, digital and broadcast programming. In addition to serving as the editor of the award-winning FORE Magazine, Adam manages all SCGA digital communication vehicles, including member newsletters, scga.org, social media and championship communications.