The Provisional Ball: What? How? When?

Often in casual play and SCGA competitions, players don’t seem to know when or how to properly play a provisional ball. It is one of the most-asked questions that the SCGA Rules Crew receives. Well, it’s time to set everyone straight on the key points and procedures of playing a provisional ball … correctly!

What is a provisional ball?

How and when do I announce a provisional ball?

A player needs to announce his or her intention to play a provisional ball before the stroke is made. The player must use the word “provisional” or otherwise clearly indicate that he or she is playing the ball provisionally under Rule 18.3.

How many times can I play the provisional ball?

The player may continue to play the provisional ball without it losing its status as a provisional ball as long as it is played from a spot that is the same distance or farther from the hole than the spot where the original ball is estimated to be (Rule 18.3c). The whole idea is to save time!

When does the provisional ball become the ball in play?

There are two ways the provisional ball becomes the ball in play:

▪ When the provisional ball is played from a spot nearer the hole than where the original ball is estimated to be (See diagram). 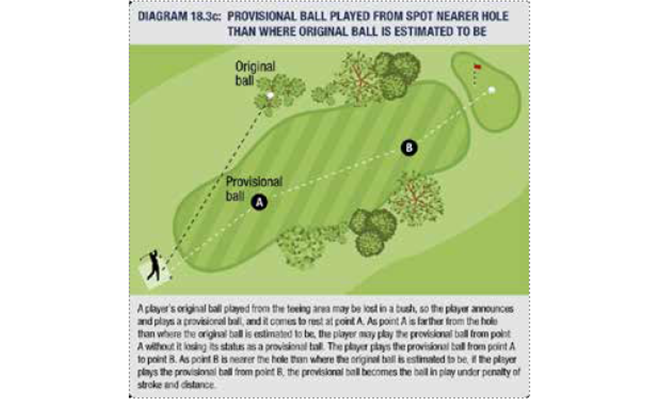 When must a provisional ball be abandoned?

There are two times when a pro-visional ball must be abandoned:

▪ When the original ball is found on the course outside a penalty area before the three-minute search time expires.

Not Your Father’s Game: With Two Facilities ...

Jimmy's career in golf administration began in 2004 as an intern with the SCGA and spent some time at the NCGA from 2005-2011. Since rejoining the SCGA in 2011, he helps administer SCGA, CGA and USGA qualifiers/championships, and is featured in the Rules Crew video series, teaching the Rules of Golf to SCGA members and its clubs. He is also in charge of the site procurement process for the Championships & Golf Operations department along with managing the exemption and Player of the Year programs. He has served as a Rules Official at numerous USGA National Championships and has achieved the highest level of rating on the PGA/USGA Rules Exam. A native Southern Californian, in his free time he enjoys hanging out with friends, playing sports and going to the beach.