The challenge seemed daunting at first. On an eight-day trip to St Andrews, my job was to rate the pubs in this lively college town where golf began six centuries ago. It soon became clear that the task was no easier than ranking the historic links courses that put Scotland at the top of golfers’ bucket lists everywhere.

The Old Course or Carnoustie? Kingsbarns or Crail? St Andrews New or St Andrews Jubilee? What about the quirky, 6,200-yard Elie links, with its hypnotic view of North Berwick across a roiling Firth of Forth seven miles away?

My three traveling friends — Doug, Noel and Mike — and I played those seven courses. No need to rank them; each has its own place in golf nirvana and doesn’t need a number by its name to embellish its pedigree.

Turns out, there’s no definitive way to rate the 20 or so pubs in St Andrews’ compact Town Centre either. No matter. The research during visits to about half the pubs in town was a blast. I did have some personal favorites, though the difference between the top of my list and the bottom is minuscule.

We stayed at an inn in the Town Centre, which essentially consists of three main streets that run roughly half a mile from the St Andrews Links on the west to the ruins of St Andrews Cathedral and St Andrews Castle on the east, stone reminders of an ancient past perched majestically above the North Sea. Our location, organized very efficiently by the Hidden Links tour service, proved perfect, because after our round of golf each day, any of the pubs we wanted to visit were no more than a seven- or eight-minute walk.

That’s the way to enjoy the pubs in Scotland, particularly in light of their strict drunk driving laws. With a .05 limit, as opposed to the .08 in California, it’s conceivable that one pint of your favorite ale could produce a positive test. Walking is the best — and easiest —transportation.

We visited 10 pubs in our eight days, though one has sadly closed since. Here they are, listed in no particular order because very often the best pub in St Andrews is the one where you’re enjoying a pint at that moment. 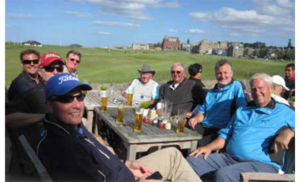 This might be the most recognizable of the St Andrews pubs, in large part because of its location alongside the Road Hole on the Old Course. There’s a large patio only a few yards from the course in addition to the pub inside. It’s populated largely by golfers who have finished their rounds or by folks waiting for their friends or family to finish playing. Very convenient from the course, a little remote if you’re walking from Town Centre.

The smallest pub in town, it was named “Best Whisky Pub in Scotland” in 2017 and “Best Pub in Scotland” in 2014 by the Scottish Bar and Pub Awards. (There’s no “e” in whisky in Scotland, and the term refers to what we call Scotch.) The barstools were occupied by seasoned locals when we visited, speaking in the thick, melodic Scottish brogue that inspired Robin Williams in his hilarious and impassioned love/ hate riff on how golf was invented. (Google it). I don’t think any of the locals were of age when the pub was established in 1858, but I didn’t check IDs. Dogs are allowed; they add to the welcome feeling of the place. 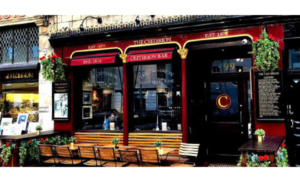 Another terrific traditional pub, established in the 1880s. Old-school intimate with seating for only about 35 and a lively mix of ages, residents and visitors. It’s known for its Cri Pies, headlined, of course, by steak and ale pie, a hearty staple in this part of the world. With historical photos on the walls, and centuries-old wood everywhere, we got the feeling we were dropping back in time. The comfort of this pub was the perfect salve after being buffeted by 35-mph winds that were strong enough to knock over our golf bags during 18 holes at Elie that day.

When we visited in 2019, the St Andrews Brewing Company had two locations, but the lively pub on North Street, unfortunately, has closed. Nevertheless, the St Andrews oatmeal stout at the original location on South Street remains unrivaled. A relative newcomer in the local pub scene (the brewery was founded in 2012), the pub has plenty of open space, which differs from many of the more established pubs, and booths are often filled with some of the 9,100 students at the University of St Andrews (founded 1413). The pub has an expansive tap collection, ample supplies of artisan malt whiskeys, bourbons and craft gins.

This was our home base, and we ate breakfast each morning in the dining area. Afternoons and evenings, it became one of our favorite watering holes and where we were introduced to what would become my two tap staples of the trip, Belhaven Best (the smoothest cream ale I’ve ever had, from a company celebrating 300 years of brewing) and Guinness Extra Cold (self explanatory). Nicely blended clientele, and a wonderful staff.

Dorothy Bell, our server the afternoon we arrived in Scotland, asked whether we had ever had the traditional Scottish dish haggis, a blend of calf or lamb entrails and organs that isn’t available in the States. We said no. She said, “In the morning, I’ll fix you a proper breakfast, and you’ll have haggis. It will improve your golf game.” We did. It didn’t. An old whisky barrel lid was mounted on the wall with the following inscription: “Too much of anything is bad, but too much good whisky is barely enough.”

It’s been around since 1902. Contrary to stereotype, not all pubs in Scotland have dart boards. Whey Pat does, and the bar has two teams in the St Andrews darts league. Game night is packed and boisterous. Unless you’re looking to fatten up your bar tab, it’s probably not a good idea to challenge one of the residents to a game of darts here.

It bills itself as “the original Irish pub” and has several big screen TVs. The evening we were there, Scotland was trounced by Russia in a European qualifier soccer match, though the combination of students and locals sitting around the high bar tables didn’t seem to suffer much from the result. Two dart boards. Molly Malone, at least in one telling, is a fictional character from the 17th century, a fishmonger by day and possibly a part-time prostitute by night. She has been immortalized in the eponymous song that is the unofficial anthem of Dublin, and by a bronze sculpture of her with her fish cart in Dublin’s Georgian Quarter.

Another traditional pub that has been around since 1887. The name fits perfectly, both for its location in the middle of the Town Centre and because there’s a square bar in the middle. Like Greyfriars, Whey Pat and Molly Malones, it is run by Belhaven pubs.

The walls and ceiling are covered with framed photos of virtually any golfer of note who has passed through town, sometimes posing with locals who have shared a pint or two with them in this spot. This is an intimate golf pub, claiming to be “only a 9-iron from the Old Course.” As soon as we found a spot at the bar, we met Patrick, a college student from Ottawa studying for a year in Dublin. He had joined his father, who had flown from Canada, to combine golf with the fulfillment of a promise to Patrick’s grandfather, who had died a few weeks before. Patrick’s grandfather had never realized his dream of playing the Old Course, and that morning Patrick and his father had spread his ashes in the Road Hole bunker.

The 9-iron claim? A video on the pub’s website shows Scottish teaching pro Alastair Love dropping a mat at the corner of North Street and Golf Place, just outside the pub. He lofts a blind 9-iron shot over the two- and three-story slate-roofed buildings housing the famous Auchterlonies golf shop onto the Old Course finishing hole. Truth in advertising.

We visited not quite half the pubs in the heart of town during our stay, so this list is far from complete. But you won’t go wrong dropping by any of them.