The Visionary: Sean Toulon Wants To Manipulate Your Ego for Better Golf 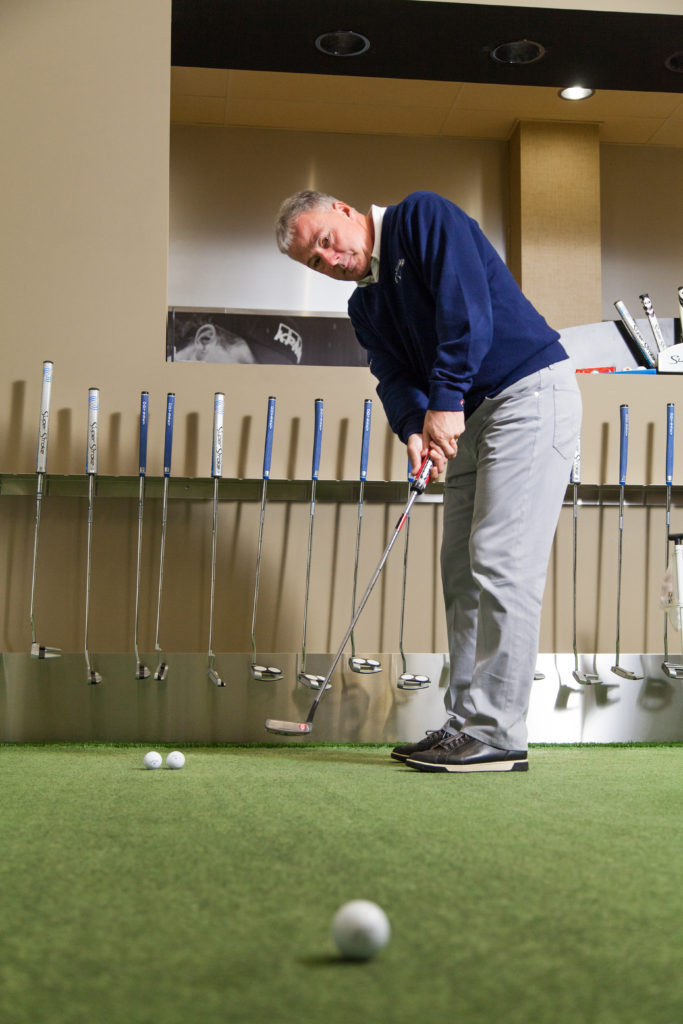 Sean Toulon has not had a hand in every major equipment breakthrough over the past 20 years. It just seems that way.

Hired as a sales rep back in the early 1980s by TaylorMade Golf founder Gary Adams, Toulon worked there for over a decade before leaving in the late 1990s to start the innovative but mostly forgotten Zevo Golf Company. He returned to TaylorMade a few years later and served as, among other things, vice president of product design. In 2016, he left TaylorMade Golf again and started his own putter company, Toulon Design, only to have Callaway Golf hire him to take over the company’s Odyssey putter line.

No matter the title or place, it is an easy bet that Toulon will extend his influence in what pro and amateur golfers alike will have in their bags for years to come. “He has a keen eye for what works,” said Golf Digest editor Mike Stachura, who manages the publication’s annual “Hot List,” widely considered the industry’s most comprehensive review of new clubs and balls. “He’s like Steve Jobs. He says, ‘Why not this?’”

It’s one thing to have something new in terms of performance or design, it’s quite another to make the paying public open their wallets. Here’s but one example: In 2010, TaylorMade President Mark King told his product managers and designers the company needed a new driver, “something exciting and fresh.”

“Mark said, ‘It just can’t be black,’” Toulon recounted. “We tested drivers in red, blue, orange, green and white. Mark asked me which one I would do. I said the one that most polarizes golfers is white.”

The white driver, known as the R11, dawned in 2011, and now you see a multitude of hues in bags. “TOUR players liked it,” Toulon added. “It was fresh. We had only 65 pros playing our drivers, but white stood out and on TV it looked like all the pros played white drivers. The credit goes to Mark King. He’d have been fired if they didn’t work.”

By “work” Toulon means “sell.” A few months later, TaylorMade added the white Rocketballz line of woods, another Toulon coinage with the most obvious marketing ploy: The ball flew like a rocket. “The easiest product to sell, ever,” said Toulon.

In 2012, TaylorMade’s line of metal woods reached the high 40s in market share, meaning nearly one out of two woods sold in the country at that time was a TaylorMade model. The only other golf product that approaches such market dominance is Titleist’s ProV1 line of golf balls. Company revenue climbed towards $2 billion.

How does an agriculture economics major from the University of Wisconsin who grew up within 10 minutes of both his high school and college and has no formal instruction in product design become one of the industry’s most important product developers and marketing forces? It started with a love of the game — his family belonged to the Nakoma GC in Madison — and then a phone call that led to a meeting.

The phone call in 1982 was to John Steinbach, which led to meeting Gary Adams at McHenry CC just south of the Illinois-Wisconsin border. Adams had started TaylorMade Golf based on the crazy idea that metal would become the future of golf clubs. Toulon began as a sales rep working for Mark King, who grew up in Green Bay, and together they advanced in the company and with others would become known as the Madison Mafia.

“What makes Sean so great is he loves golf more than anyone I’ve ever met,” said King, who now runs all North America businesses but the golf division for adidas, which acquired TaylorMade Golf with the purchase of Solomon in 1997. “He loves equipment and he loves the people who play the game. It’s not a business for Sean. It’s his love and his life.”

Perhaps the best example of Toulon’s passion can be captured in a scene from 2000, when he, King and other TaylorMade alumni returned to the fledgling company. It had lost a great deal of market share to Callaway, which was enjoying the full blossom of its Big Bertha line of woods. To rejoin King at TaylorMade, Toulon left the company he started, Zevo, whose prime purpose was to develop clubs and a better way to fit them to individual swing characteristics of golfers.

According to John Hoeflich, who had joined TaylorMade then as an advisor and Tom Olsavsky, a long-time TaylorMade manager who now runs Cobra Golf, the meetings to determine the company’s next line of woods and irons produced intense debate. In the end, the company in 2001 released Toulon’s initiative called the “300” series. Essentially three different models of drivers, it included a 300 cubic centimeter model for the better player who preferred performance, a 360cc model for the golfer who needed a game improvement club and a 320cc model for the golfer who wanted a little of both.

“The 300 model was essentially a Titleist driver, the 360 was made to go against PING and the 320 against the Big Bertha,” Stachura said. “It was pretty unusual to launch three models at once, as a family of drivers. Club companies at the time launched a driver. Singular.”

Toulon sourced the 300 series to what he and designer Don Wood learned working together at Zevo Golf. “We were ahead of ourselves there,” Toulon said. “Don and I learned that one size fits nobody. We segmented golfers by their physical and playing abilities, and then began to look at it in a market sense and demographics.”

A standard driver then was 43 inches long, and it doesn’t take much imagination to see that selling it to a someone who is 5’ 8” as well as someone who is 6’ 3” made no sense. Toulon and Wood learned that lie angle changed with size. Body type often affected face angle. Loft was important, too. Getting those factors right was just the start for what would later become the current standard of all metal woods: self-fitting for loft and face angle through adjustable hosels and moveable interior weights.

Behind all this innovation — and there were many others, such as the SLDR driver and the Rossa putter line (Toulon’s personal love) — data culled from the computer analysis of millions of swings changed the way clubs came to be designed. But what the computer print outs told the club guys often ran against the common thinking in the marketplace. Toulon may have majored in ag-econ, but he garnered insights from that Milton College psych major, Gary Adams.

“It’s pretty powerful, the golfing ego,” Toulon said. “There have been lots of things we did over the last couple of years to try to get around that, and they were tough battles.”

For example, it’s been commonly understood by the club manufactures that air provides less resistance than turf. Who doesn’t know that? Golfers who think they should only be playing a driver with 9 degrees of face loft, like their heroes on the PGA TOUR. A driver with 12 degrees produces higher trajectory that in conjunction with the modern ball results for many amateurs in more carry distance and more roll for maximum yardage.

“We came out with the SLDR driver that put the interior weight forward in the clubhead,” Toulon said. “We were trying to change the uniform of the golfer and find incredible growth. But if it doesn’t work it’s pretty risky. And the SLDR didn’t really take off. Men said, ‘I won’t play a driver at 12 degrees. That’s a woman’s driver.’

“At Zevo,” he continued, “I wanted to look at the golfer and understand how he feels and sees himself and appeal to them on a psychological level. They may not see it, but if you can hit on these buttons you can get an irrational golfer to react in a rational way. It’s a cerebral outlook. Still works today.”

Wood is a designer at heart and acknowledges the difference. “Can [Sean] operate a milling machine? No. Can he run CAD software and design a club? No. Operate a caliper? Sure. But he approaches club design from a marketing point of view, and the man feels he has his hands on the pulse of the market.” 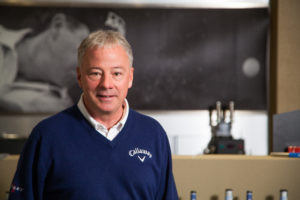 You have to be an industry insider to know TaylorMade Golf is for sale. A billion-dollar-a-year company just a few years ago is at deadline being scrutinized by investment groups. You have to wonder if that Gary Adams ethos will disappear. Meanwhile, Toulon has landed at Callaway, which is doing well financially.

Compared to the investment cast steel used in Toulon’s 300 series, metal woods and even irons are composed of multiple materials — milled titanium, thin steel faces and synthetic carbon fibers. That is one reason why we see Jason Day hit 3-wood shots that carry 280 yards in the air.

“Engineering-wise, it’s way harder,” Toulon said of club design today. “There are more moving parts. It’s very intense engineering and only a few companies can do it because they have the structure and the R&D.

“Clubs will be dramatically better in five years, and you’ll definitely see yardage gains,” Toulon added, his words picking up speed. “The claims that distance is maxed are as false today as ever. Yardage gains will come not just from the golf club but from pairing of the shaft, head and the golf ball, and how the golfer thinks. A golfer who feels great over a piece of equipment makes a better swing. Yes, it’s about the psychology of the golfer. We want to manipulate the ego of a golfer in the right way and raise that confidence level.”

Pearl of the Pacific: In Mazatlán, Mexico, ...