Between water mandates, course closures, round-count concerns and aging private memberships, the future of golf may appear to be on suspect turf. But fear not: The fairways of the future are being avidly explored by the game’s next generation of players. A survey of six of golf’s leading organizations across Southern California determined that the opportunities for Access, Education, Instruction and Tournaments are being enjoyed in record numbers by youth throughout the Southland. 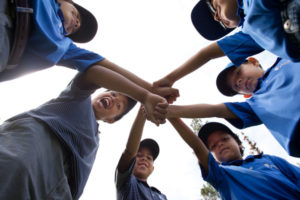 The stepping stones toward building the next generation of golfers often begins with just getting that first club in a kid’s hand. In 2006, the SCGA Junior Golf Foundation debuted with one staff member, Executive Director Kevin Gigax. Just a decade later, SCGA Junior’s vision of access has spread to serve 6,000 kids annually.

“I hope that SCGA Junior will provide access to every kid that needs access,” Gigax says. “And I want us to be in more underserved communities where we can teach kids the game for a lifetime. In 10 years, I want to say that not only do we have a ton of kids playing golf, but when they turn 18 or 20 years old, there are still options and opportunities to stay in the game so we don’t see that group stagnate until they turn 40 or 50.”

Recognizing that cost is an impediment for many juniors, Gigax and SCGA Junior have opened the gateway with a $50 membership that extends play rates to a mere $1-$5 at 155 courses across the Southland.

Growing the game via open-armed diversity has long been behind the success of the Temecula-based Valley Junior Golf Association (VJGA), which began in 1989 and serves kids aged 4-18 across most of Riverside County.

“We want kids to have access, we want kids from all backgrounds,” says Valarie Skovron, executive director of operations for the VJGA, where annual membership costs $60. “That’s always been the core of this organization. There a lot of kids who come from average-income families who want to play the game, and mom and dad don’t have that $300 for every single big tournament.”

Having launched The First Tee of Coachella Valley in 2008 before starting the Orange County chapter in 2013, Teal Guion has seen firsthand how ease of accessibility proves a boon to getting kids involved. In their respective inceptions, each chapter began with about 50 members. Today, the two locales echo the game’s junior health with at least 600 annual members each.

At a membership cost of $90 a year, The First Tee of the O.C. couples its Core Values with provided equipment. “Junior golf is in a good place,” says Guion, a Palm Springs native and program director of The First Tee of Orange County. “What I see now is a more inclusive approach to the game for juniors. We let it be one of the sports kids can try in their ‘sampling’ years when they’re doing a million different things.” 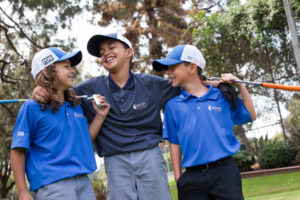 Enthusiasm for the junior game in Orange County is further recognized by the 20th anniversary of the Tiger Woods Foundation (TWF). “I only wish I had the types of programs and resources that are available now when I was young,” says Roman Gonzalez, director of golf & recreation of the foundation’s Tiger Woods Learning Center since its 2006 debut. “At the TWLC, we use golf as a vehicle to expose students to careers in the golf industry, and as a way to reach out to at-risk youth within our community, at little or no cost.”

Scholarships for both introductory access and collegiate opportunity are crucial to both the present and future junior growth, with the Southern California PGA’s $20,000/year in scholarships for junior golfers and the TWF’s Earl Woods Scholarship both designed specifically to support first-generation scholars. SCGA Junior boasts its own scholarship program as well.

“We fund 10-12 new scholars a year and in total this year we’ll have 47 scholars receiving $155,000 in college scholarships,” Gigax says. “And it’s not just about the golf; those kids don’t have to play college golf, it’s about the fact that they’ve connected with the game and are pursuing their education.”

Such foresight has long been found at the VJGA, where members have enrolled in the “I Want to Play Golf in College” class since 1991. “I remember when Rickie Fowler was in about 5th grade, and I’d always geared the college class to junior high and high school kids,” Skovron recalls. “And in walks Rickie with his mom, and I said, ‘You’re awfully young,’ and he said, ‘But I’ve gotta’ find out what I need to do and it’s never too soon.’ He grabbed a seat and took notes the whole night.”

Fundamentals of character-building have seen The First Tee’s Life Skills classroom and DRIVE outreach program finding grassroots success with an upbeat focus on values and etiquette. “Once we introduce the game in a fun, positive way to these kids, they just take to it,” Guion says. “And they don’t care if they’re going to be the next Jordan Spieth.”

Bringing more kids to the game also involves bringing the game to them.

“We have a Mobile Golf Outreach Program that visits local elementary schools and has allowed us to reach 4,000 students annually,” Hernandez says. “The statistic that I am proudest of is that we are almost at a 55/45 percent boy-to-girl participation ratio.”

In generations past, working with kids was generally consigned to new pros. Perhaps best known as Tiger Woods’ first coach, Rudy Duran, longtime director of the U.S. Kids Golf – Los Angeles Tour, has been working with kids for nearly a half-century. 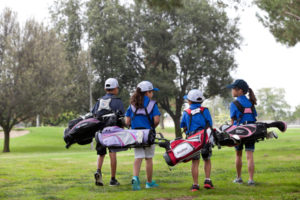 “Junior golf was important back in 1971, but it was pretty much an aside, something you relegated your lowest assistant pro to go do,” Duran recalls. “And juniors weren’t often openly received at the municipal golf courses. Typically, that was something done with a parent at a country club and not too much at the public courses.”

Properly sized clubs were also a drawback. “Back then, there was basically no junior equipment,” adds Duran. “Most kids were just given long clubs and had to deal with it. Today, all major companies have some kind of junior golf equipment.”

Proactively seeking out specific regions with nonexistent or underdeveloped junior programs, SCGA Junior provides instruction with teachers certified by the Titleist Performance Institute program. “At SCGA Junior, we want to get those kids from not just getting the first club in their hand, but then taking them to the high school golf team — that’s the gap we want to fill,” Gigax says.

Those concerned with golf’s future will find salve in the burgeoning numbers of juniors getting into tournament play. “The junior golf tournament business is booming,” says Duran, whose 24-event season had 50 players per tourney five years ago and now sees 120 players per tournament, all with waiting lists.

At the VJGA, nearly 30 annual tournaments dot the calendar across Riverside County for an organization that began humbly with 25 members before spiking to 500, and now tends a more workable roster of about 300 kids.

Across the three-tiers of play on the SCPGA Junior Tour, organizers are now running nearly 250 tournaments a year to meet player demand, while offering $40,000 in tourney grants.

“It’s extremely good right now,” says Kevin Smith, junior golf director SCPGA Junior Tour, whose organization tallied 350 kids in 2012 and now sports over 2,500 members annually across the entire Junior program. “The numbers just keep increasing each year as far as participation and tournament play. We’ve kept increasing our number of tournaments to meet the demand, so we don’t have waiting lists and can accommodate more people. From a membership standpoint, it goes up about 150 kids a year and the rounds played have now exceeded the 20,000 mark for a year.”