Stand By Me: Temecula Native Joe Skovron On Life As Rickie Fowler’s Caddie

Professional golf is an individual sport at its core. World-class players perform shot after shot on the biggest of stages with lethal precision. But this doesn’t happen without consultation from trusted confidants before each swing. On TOUR, the player executes while the caddie prepares, serving as a motivator, psychologist and in this case, a friend.

Joe Skovron ended up carrying a bag by way of his own misfortune. Back when he was playing on the mini-tours, Skovron roomed with Brendan Steele and would caddie for him during final rounds, if he had already missed the cut himself.

After he officially packed away the clubs competitively, Skovron followed Steele to the Nationwide Tour and continued to be his right-hand man. Around the same time, he was offered a gig caddying for an old friend and former UCLA Bruin, Charlotte Mayorkas, on the LPGA Tour.

That 2007-08 season was a hectic one for Skovron, working 15 events for Steele and another eight for Mayorkas while still balancing a head coaching job at his alma mater, University of La Verne, where he was an All-American golfer.

Then opportunity knocked. An ask from a lifelong pal who grew up playing in the Skovron family’s Valley Junior Golf Association in Temecula while honing his swing down the street at Bill Teasdall’s Murrieta Valley Golf Range, where Joe’s father Lou still gives lessons.

“I’ve known Rickie [Fowler] since he was a little kid,” Skovron said. “He was still an amateur at the time, but I knew he was looking for a caddie. So one day he asked if I wanted to work an upcoming Nationwide Tour event. The answer was ‘yes.’”

Needing a par to win their inaugural showing, Fowler bogeyed the final hole of the tournament and lost in a playoff to Derek Lamely.

While their first date on the links didn’t end with a storybook embrace, the spark was evident. Fowler asked Skovron to join him that fall as he chased his TOUR card. 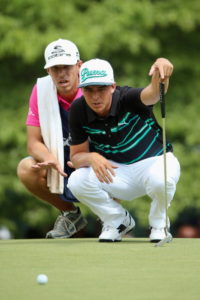 “I’ve been with him ever since,” Skovron said.

Good things take time, but Skovron and Fowler had a head start on the chemistry that every caddie-player relationship needs.

“It clicked right away with us. Obviously you learn more and more about a person the more you’re around them,” Skovron said, “but we had a lot of chemistry really quickly. It probably helped that he played really well early on and continued to shoot lights out.”

As with any partnership, the approach changes over time. When drawing up a plan of attack, Skovron’s strategy has advanced throughout the years.

“My first season, there were a lot of hours on a Monday because I hadn’t seen these courses before,” he said. “But now, with updated yardage books and notes from previous trips for reference, I’m more prepared.”

With experience comes wisdom, and Skovron is working hard on that long white beard.

“Over time you become familiar with the pin positions and learn how to read the leaves of the different trees for wind direction,” he said. “I now know how certain weather conditions will affect the difficulty of a specific course.”

Nowadays, Mondays are mostly for going through the checklist to make sure nothing has changed. But when a major championship week rolls around, toss the blueprint out the window.

“When you go to a major championship or somewhere we haven’t been (like The Open at Royal Troon) a lot more goes into it,” Skovron said. “Rickie plays more practice rounds, and I walk the golf course more. There’s just more preparation in that four to five days to get ready and not have any surprises.”

The player-caddie dynamic has evolved since the days of Happy Gilmore hiring a homeless guy from the parking lot to work for him at The Waterbury Open. Both parties live separate, individual lives.

“Rickie and I are going to meet there at the course,” Skovron said. “That’s one thing people don’t understand. You live in a different town, so you’re traveling from different places. Players eat in one area, caddies another. They’re in the locker room; we’re not. So we’re very much separated.” 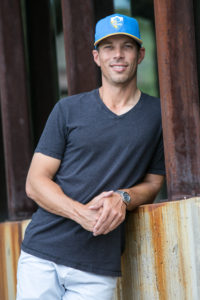 Come Thursday of a tournament week, caddie and player are united as one.

If Rickie has a first round tee time of 9 a.m., Joe has already been on-site since 7 a.m. He’s grabbed a pin sheet and plugged them into his yardage books while making sure he’s familiar and comfortable with each location.

At 8 a.m., Skovron meets up with Rickie on the range and first checks the wind, discussing possible club selection changes due to the conditions. Rickie has already eaten, done warm-ups with his trainer and will hit the range, chip and putt before it’s time to tee off. Once the round is over, Skovron’s day is done unless Rickie wants to practice post-round.

After he clocks out for the day, Skovron and his boss usually go their separate ways.

“We get along really well, but we still try to maintain a balance that’s really important in our profession,” Skovron said. “I don’t want him getting tired of me and I want things to always be fresh. If you’re going out to dinner every night, what’re you going to talk about on the course?”

Well, they just might talk about their housing setups for that week. Fowler’s living situations have routinely gone viral on social media, ordinarily comprising any combination of Jordan Speith, Justin Thomas or Smylie Kaufmann as roommates, all while raising TOUR camaraderie to the highest of levels.

“Two of my closest friends are Matt Kelly (Marc Leishman’s caddie) and Sam Pinfold (Cameron Smith’s caddie),” he said. “But I’ve become close with everyone on TOUR because we room together on the road. Especially us guys without families, we’re bunking up to save a little bit of cost.

“For example, at The Open, I had a house with Jim Mackay (Phil Mickelson’s caddie), Andy Sanders (Jimmy Walker’s caddie), John Wood (Matt Kuchar’s caddie) and Kelly. It was a blast.” 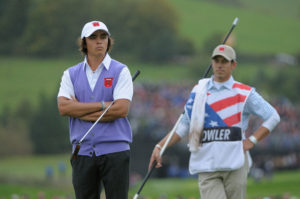 Following a good night’s rest, it’s back to the course where Skovron will not only carry Fowler’s bag, but also serve as a calming presence.

“Rickie does a really good job of balancing his emotions out there. He’s one of the best at keeping it in check,” Skovron said. “Where I come in is when we’re on that cut line late, when there’s an internal struggle during the round or the biggest one, when we’re in contention late.

“It’s my job to make him feel as comfortable as I can so that he can hit every golf shot,” Skovron said. “My biggest thing is to keep him in his routine and at the same pace.”

During a round, the only time Fowler and Skovron will talk about the shot at hand is when they first walk up to the ball to discuss club selection and then occasionally for a few seconds afterwards.

“After the shot we’re talking with each other or the other guys in the group,” Skovron said. “These guys talk about anything you can think of and you make a lot of friendships. Rickie gets along so well with everyone that we usually have laid-back, casual days out there.”

There’s not a bad pairing for Fowler, but there are certainly a few names that arouse excitement when the pairing sheet get released.

“Rickie’s always been close with Bubba Watson,” Skovron said. “Him and Jason Day are a great pairing too. Rory McIlroy is just a good dude, we’ll chat with him all round.” 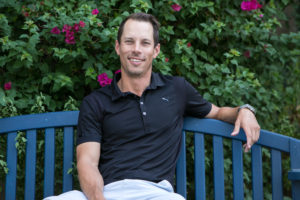 Having fun is cool, but learning from a duo that’s paved the way for generations to come is even better.

“For some reason, Mickelson and ‘Bones’ Mackay have really taken on mentor roles with us,” Skovron said. “Phil has been great with Rickie, and Bones same to me. He’s helped me the most of anyone out there. He’s like a big brother.”

For those times when Skovron and Fowler aren’t catching up with their playing partners or soaking up mentor musings, it’s straight business. The caddie makes suggestions, and the player executes.

“It’s ultimately his decision, but he’s really good about hearing what I have to say,” Skovron said. “As a caddie, you don’t know what they feel. Sometimes a yardage doesn’t make sense with a certain club, but you’re going to make a better swing because you feel that it’s the right one.”

A perfect example of this was at the Scottish Open last year. Fowler was tied for the lead on the 18th tee, standing on an elevated box, peering out at two deadly fairway bunkers lining each side of the fairway.

“I suggested 3-wood and he asked me ‘Why?’” Skovron said. “I told him we’d get to those bunkers with the driver. He nodded, grabbed driver instead and roped one right between. He made birdie and won.”

That’s the best thing you can have happen as a caddy,” Skovron shared. “You make a suggestion to keep out of trouble, but the player is so confident. They know better than us, that’s why we’re carrying the bag.” 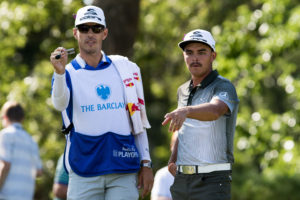 Conversely, sometimes the smart play just doesn’t work out as planned. At this year’s Waste Management Open, with the crowd in a Fowler frenzy, Rickie held a 2-shot lead on No. 17 tee, a drivable par-4.

“We went through the whole process and I explained why I didn’t like 3-wood,” Skovron said. “There’s water short left, and the 3-wood turns that way. Worse case, I figured he could get the driver into the back bunker, and his miss with the driver is to the right, so with that pin it would have been an easy pitch shot.”

Unfortunately, Fowler made a great swing and crushed the driver through the narrow of the green and into the water. After bogeying, he bounced back to birdie No. 18 and force a playoff with Hideki Matsuyama. When they pushed the first three playoff holes, they made their way back to No. 17 tee.

“This time, we pulled out the 3-wood and hit it short, left and in the water,” chuckled Skovron. “It’s just not always going to pan out, right decision or not.”

There are always ups and downs, but Skovron and Fowler have shared quite a few special on-course moments.

“The Ryder Cup in 2010, when he and Jim Furyk made that comeback from 2-down after four holes and Rickie drilled the birdie to halve the match on the 18th green,” Skovron said. “That’ll always been one of those experiences that gives me chills.

“His first professional win in Korea was really cool too. And the other two that stand out are his first PGA TOUR win at Quail Hollow and the 2015 Players. That finish, just the way he did it in that big of an event, was incredible.”

Get to know Nancy Lopez