Opening Doors to the Future

When asked how SCGA Junior has helped him in his young golf life, scholar Sal Hinojosa just shakes his head and grins.

“Where do I even begin?” he trails off in thought.

He could begin with the opportunities he’s had to play some of L.A.’s most exclusive courses, like The Los Angeles CC and Wilshire CC. Or with the connections that landed him a job caddying at Wilshire CC and the HUGEL- AIR PREMIA LA Open pro-am. He could begin with meeting Bryson DeChambeau at the Friends of Golf charity tournament. Or with the scholarship that is helping him play golf at Whittier College.

All of that is true. But he starts with a more philosophical approach, by saying that the game, and SCGA Junior, have taught him discipline, respect and how to present himself in public. The on-course opportunities that Sal has earned through SCGA Junior have been special, but the life skills that he’s gained off the course have proven to be just as valuable. For Hinojosa, SCGA Junior has been all about opening doors. And even if he didn’t know it at the time, he certainly does now.

“How many people can say that they’ve played the courses that I’ve played, met the people that I’ve met? It’s slim to none and I thank SCGA Junior for that,” he said. 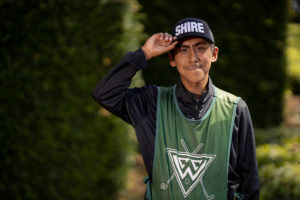 Hinojosa was first introduced to SCGA Junior through a Kids and Cops tournament in Norwalk when he was six years old. Around that same time, he decided he was going to play college golf.

“When Sal sets a goal for himself, he always achieves it,” said his dad, Raul Hinojosa. “When he told me that he wanted to play golf in college when he was six, I knew that he would. It was just a matter of where and how he was going to get it done, and SCGA Junior played a huge role in that.”

Sal was an active participant in the Player & Youth Development program, making friends in class that he still keeps in touch with. He was an avid Golf Pass user, heading to the range for subsidized playing opportunities.

“Those $1 buckets made it so we could go practice as much as he wanted and it saved us so much money,” Raul said. “It’s unbelievable; the program probably saved us thousands of dollars.”

Aside from his rising prowess on the course, Sal’s dedication and work ethic impressed his coaches. He earned the opportunity to play in one of the SCGA Foundation’s fundraisers, where he played alongside board members and donors.

As they were talking about Hinojosa’s interests, he mentioned that he had experience caddying, but was looking for more. After swapping contact info, Hinojosa landed an interview with Wilshire CC’s director of golf,, Rick Rielly, PGA.

“He asked me if I wanted to come in and caddy on Saturday, and I’ve been there ever since,” he said.

Through his job at Wilshire CC, Sal caddied alongside Pernilla Lindberg in the L.A. Open.

“Her caddie was asking me for advice, and it was just so surreal,” Hinojosa said.

Seeing the professional caddy write down his advice on yardages and placements in his notebook is one of his favorite moments. One thing that caddying has taught Hinojosa is how to have a thick skin, something he knows will come in handy in his future career. 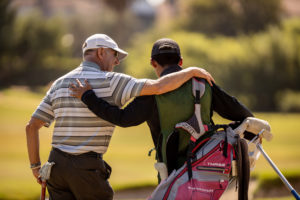 Once his collegiate golf days are over, Hinojosa hopes to become a police officer. He goes on ride-alongs with the Downey Police Department and says that the same character traits he learned on the course — patience, thick skin and how to read others — are going to help him as an officer.

As for other goals, well, Hinojosa already has quite a few lined up: graduate in three years; attend the police academy; win an individual conference tournament; oh, and maybe get his PGA teaching card while he’s at it. He wouldn’t pass up the opportunity to caddy professionally if it presented itself either.

And for as many doors as SCGA Junior has been able to open for him in the golfing community, one of the most meaningful was off the course. Hinojosa worked with Ted Gleason, a college golf adviser who works with SCGA Junior’s college prep program.

“He mentored Sal and got him on the right track, taught him how to get in touch with college coaches, how to interact with them, which colleges to look at and helped him find his best fit,” Raul said. “Everyone in the program inspired him to see what was possible for a kid like him.”

“Everybody that I’ve met through SCGA Junior has given me a piece of advice that has helped me get to where I am now,” Sal shares as he’s asked where he would be without SCGA Junior. “The program opened a lot of doors for me. SCGA Junior has changed my life a lot.”