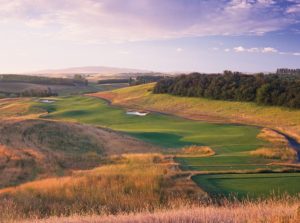 The Palouse — a 4,000-square-mile region of the inland Pacific Northwest — is nothing short of stunning. Seemingly infinite in its dimension-defying landscape, with endless rolls and hummocks, hills and crinkles, it is robed in wheat and prairie grasses and wildflowers, pocked with wetlands and stands of pine and broadleaf. Anchored on one end by Walla Walla, in far southeastern Washington State, it rumbles on toward Spokane, and spills over into Idaho where it gives way somewhere near the southern end of Lake Coeur d’Alene. And speckled throughout are some kick-ass golf courses.

Early explorers and settlers wrote of the depth-perception-warping enormity of the prairie and this course induces a similar confusion though crafted dissonance; a green-enveloping waste on the nearly reachable par-4 fourth, for instance, grabs your attention as you overlook a crater of sand out to the right in what looks to be the safe side.

Smart players will reflect on their round of golf over dinner, preferably with a glass of locally produced merlot or cabernet sauvignon, two of the region’s best varietals. There are more than 100 wineries in this region and enough tasting rooms to assuage even the worst rounds of golf. Routing 100 miles northward from Walla Walla, Pullman is one of the cooler if not most isolated university towns not in the Dakotas. It’s a must-get-to destination because WSU’s Palouse Ridge GC tips most scales when folks start weighing in on commendable school tracks. As with Wine Valley, Palouse Ridge embraces the land, here given far more to elevation heft and steeper defiles; ridge is in the name for a reason. Not much dirt was pushed around to find a suitable routing, or at least not that’s readily apparent.

Holes are flung across knife-edge escarpments and others cascade away. If you are determined to walk, all that up-down-up earns extra IPAs post-round, and the Pacific Northwest produces a bunch of winners. Even up high, the views are more intimate, of rye-hued grasses and shocks of pine tight to the course because the pockets and folds of the Palouse here are more pronounced and confining. 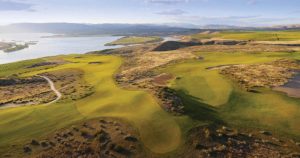 Across the border into Idaho Panhandle, the steppe cedes to the stirrings of the Rockies. Circling Raven GC resides on the edge, the transitional zone of grassland to forest to mountain. At the guttural level, Circling Raven is stunning; threads of fairway woven through dense shags of fescue within massive wide-angle corridors, with sentinel pines on guard and in the background the first heaves of the Great Western Spine are apparent. It’s the American West of big sky scale, north of 600 acres when you draw a line around the margins — that’s five U.S. Open sites

To yin there is yang, and Coeur d’Alene Resort GC is the outlier in this field, a woodland track of wall-to-wall turfgrass needle-eyed through stands of conifers and tickled by that same-named lake. It harbors one of golf’s most iconic sights: it floats, you take a boat to it, and I hit it using a 4-wood from 185 yards, so that says something about the wind that day. The island green at Coeur d’Alene is an island (in a game of isthmus greens) and it’s not even the best hole on the course. It’s not even the best par-3. Strong course.

Ninety minutes south of Canada, three-plus hours east of Seattle, with not much else around except apples and grouse, Gamble Sands golf course is out there … but, to a Californian anyway, worth the 400-mile, one-day detour. 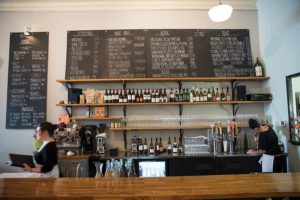 Gamble occupies a broad bench high above the Columbia River. It’s a massive accretion of sand, heaved and cleaved and in native guise covered with sagescrub. In an industry where every patch of Bermuda in a swamp is trumped as “links-like,” this part of Washington outside the little berg of Brewster has the key links attributes save the ocean frontage: sand and a cool short-season climate that favors hardy grasses shorn low and running fast.

Gamble is one of the bright spots on the golf horizon because it is scenic, memorable, fun, challenging, reasonably priced and you hope like mad to go back because it didn’t kick the crap out of you.

Designer David McLay Kidd says, “Gamble Sands is much more of a sibling to Bandon Dunes (the first course of which he designed) than anything I created between the two.I had gotten sick of creating difficult courses that appeal to the golf media but not the general public. With Gamble my little team and I reversed the trend and we said, ‘Let’s not get seduced by the rankings. Let’s build a course that is all about what the people enjoy.’ It is like Bandon Dunes nearly 20 years ago.”