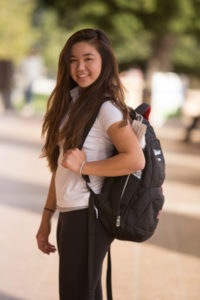 Ysabel Tran hasn’t always been the young woman she is now. A confident, bright college freshman with a lot to say, Tran recently greeted us on her Cal State Northridge Campus. In the hustle and bustle of the crowded student library, she guided us quickly and with poise as we went through a somewhat public interview and photo shoot.

“We can do this somewhere less crowded if it makes you uncomfortable,” I suggest, thinking I never would have wanted that much attention on me during college.

“It’s fine,” she responds quickly. “Before college I may have been embarrassed, but now I really don’t mind.”

College. What should be a transforming and growing experience for many isn’t always as black and white; but for Tran, who is still less than a year through her collegiate experience, it already has been.

“A lot of that is because of SCGA Junior,” credits Tran. “Being involved with them always helped me meet new people and experience new things.”

As a sixth grader, Tran was introduced to SCGA Junior through her participation with the Tiger Woods Learning Center in Orange County. Her parents didn’t play golf, but Tran had always been interested in the game, having grown up adjacent to a course.

“I was always wondering why it was so crowded and what people were doing over there,” she says. “I wanted to go, and really ended up introducing the game to the rest of my family. My younger brother is a golfer now too.”

Always a competitive kid, Tran succeeded in both athletics and academics. She played a number of different sports, and it wasn’t until age 15 when she decided to take golf more seriously. 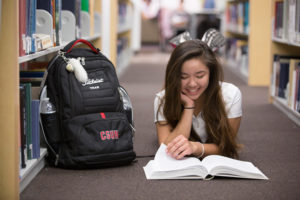 “I realized I could make something of myself through the game,” she says. “I used the SCGA Junior Golf Pass, and it allowed me to play so many different courses and meet new people. It motivated me to get better. It was a great way to grow in the game.”

When she got to Troy High School in Fullerton, she joined the golf team. She credits that experience for showing her what being on a golf team could be like, and opening her eyes to the possibilities and joy college golf could bring.

“Golf is such an individual sport, I had never really had that team atmosphere with the game before,” she says. “It helped me get to know other people better, and get along and work with others through golf.”

Her talents kept up with her attitude, and in 2015 she won the CIF State Title. Before she knew it, she was being approached by the CSUN coach.

“I didn’t know much about CSUN beforehand, but I came to visit and loved how the classes here worked and how the golf team operated,” she says. “I also liked that it was away from home but not too far away.”

Having been an active participant with SCGA Junior, Tran applied to be a program scholar.

“When I got the letter in the mail, I was ripping it open and as soon as I read it I thought ‘Oh my god, I can go to college!’” she says. “I always loved being involved in their programs, so it was an honor to be selected. SCGA Junior really gives kids who don’t have much an opportunity to be involved with golf, and an opportunity to be somebody someday.”

As one of 45 scholars that will receive a total of $155,000, Tran feels the pressure to represent the program well, but it’s a pressure she relishes. On top of her golf commitment, Tran has elected to be a bio-chem major, sharing that while golf is her first goal, being a doctor, and more specifically a dermatologist, is her “backup plan.”

“The first semester was great,” she says. “The classes were challenging, but I loved them. And I played in all the tournaments, which as a freshman, I was really proud of. Moving forward, my goal is to motivate the rest of the team and perform to the best of my abilities. Also, to always keep a level head.”

Sure doesn’t sound like the shy, quiet girl we met years ago.

“Ysabel really is a leader on and off the course,” says CSUN head coach Gina Umeck. “She has an optimistic, never-quit attitude that sets her apart, and I am certain she’ll be successful anywhere she points herself.”