ProfilesSummer 2016
Home›Profiles›California Girl: A Q&A with the LPGA’s Ryann O’Toole

California Girl: A Q&A with the LPGA’s Ryann O’Toole

You can take the girl out of Southern California — and send her around the world as a professional golfer — but you can’t take the Southern California out of Ryann O’Toole. A three-time MVP of the San Clemente High School golf team, O’Toole played four years at UCLA before turning professional in 2009. The 29-year-old appeared on Golf Channel’s “Big Break” in 2010, went 2-0-2 on the USA team in the 2011 Solheim Cup and has four professional wins — three on the Symetra Tour and one on the Australia Ladies Professional Golf Tour. She talks about the state of her game, the value of attending college and her favorite thing to do when she comes home to San Clemente. 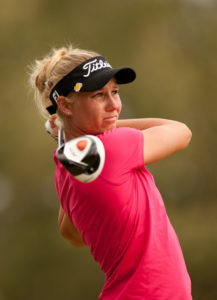 FORE: You had four top 20s in your first 10 events this year. How is your game progressing?

In 2014 I struggled to make cuts. Then last year, all of a sudden, cuts were easy to come by. So then it was rather than me going out to win — and of course as a player you want to win — my coach, Jorge Parada, and sports psychologist, Bhrett McCabe, had me focus on getting in the top 30, then the top 20 and then the top 10. Now that I have had some top 10s (two so far in 2016), can I get in the top 3? That’s been more my thinking. It’s about building blocks so that I don’t get discouraged or frustrated.

How hard is it to win on the LPGA Tour?

It’s one person out of the 144 that tee it up each week. It’s not easy. It’s really about staying patient and not getting ahead of yourself. Once you’re in that position (of contending) often, you grow that mindset. You get more comfortable being in that situation. Any athlete is going to feel excited, nervous and be a little more amped. It’s natural. You work so hard to get there, but can you make it comfortable for yourself so that it becomes normal?

You played other sports before taking up golf at 12 years old at the San Clemente Municipal course. That’s relatively late these days. How did that affect your progress?

I see a lot of girls who were stars when we played junior golf together but who burned out before and through college. Girls who were dominating but then realized it wasn’t for them. I love it. Let’s be honest, it’s not an easy career. You are traveling 30-plus weeks a year, living out of a suitcase. It’s a different life. You make the most of it but you have to love the game. You’re going to have bad weeks, months, even years. It weeds out those who truly love it and those who don’t. Whether I started at 12 or earlier I don’t think it would have mattered. I think I would have loved it all the same. I think starting later and playing other sports gave me an advantage.

Why did you choose to attend UCLA?

I was looking at Texas, Arizona State, Cal-Berkeley and UCLA. It was really tough. There were things I liked about each school. I kind of took golf out of the picture and thought, well if something happens or I woke up and didn’t want to play golf, which school did I want to be affiliated with? That was UCLA. We got to play a lot of cool golf courses like Bel-Air, Wilshire, Brentwood and Hillcrest. It was such a great rotation. Playing at those places has helped me as a professional. 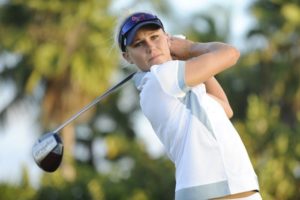 Would you encourage junior golfers to attend college before turning pro?

I see some of these girls who turn pro and don’t go to college and I feel sorry for them. You can’t get that time back. It’s four years of your life where you get to kind of grow up, be crazy, rebel a little bit, live without your parents. I think it’s something everybody should go through. Golf will be there when you are done. Try college out even for a year. If you are a dominating junior golfer, like Michelle Wie, Paula Creamer, Morgan Pressel or Lydia Ko, then I could see going pro. But if you’re not dominating and wining all the time, then go to college. Your game will grow and you will learn about yourself.

You were on the Golf Channel’s “Big Break” in 2010, played on the winning USA team in the 2011 Solheim Cup and went through LPGA Qualifying School multiple times. In which of those events did you feel the most pressure?

“Big Break” was a lot of pressure. I was still so young and not used to having a camera in my face or talking to a camera. It was two weeks of nerve-wracking golf shots. Solheim brought me back to playing team sports. I loved Solheim. I relished it as far as the camaraderie and having a partner who could pull the weight if you messed up. Q School is something I never want to go back to. It’s not nerve wracking, it’s just more stressful — my career was on the line. It was more of a ‘I don’t want to be here’ kind of feeling.

You have traveled all over the world. When you come back home what do you look forward to the most?

Surfing. I have to get into the water. I’ll go to Cotton’s Point and Lower Trestles in San Clemente, and other places like El Porto and Malibu.

If pro surfers are under par, and even par is more like a good amateur, then I consider myself a 4-handicap. I’m like the compete-in-your-country-club-tournament equivalent of a surfer. I can hang but I would need a couple of shots from the pro surfers. 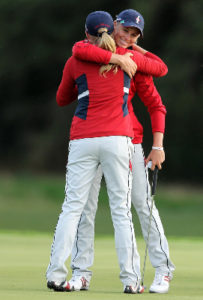 What are your favorite courses in Southern California?

If I play at home, I always go to Cote de Caza. I love the Friday Skins game there and that course is always in good condition. Or I go to Bella Collina in San Clemente which is always fun. You get some funky lies there.

How often do you get back to where you started: San Clemente Municipal Golf Club?

I probably play there once a year now. It’s like a time lapse when I go back. I can see myself as a 12-year-old at the driving range because all the people I knew back then still work there. It’s familiar faces like Dave Cook, Linda Cook, Dave Beatty and Rocky Rakfin. When I get my first LPGA win I will definitely go back with the trophy to thank everybody there and at other courses in San Clemente. Without my hometown support I wouldn’t be anything. It’s great to have that backing and it’s great to represent such an amazing town.