The late great New York Yankee Hall of Fame catcher and malapropism-prone philosopher Yogi Berra once said, “You can see a lot just by watching.” Nothing proves the voracity of this “Yogiism” more convincingly than observing the multi-media and fan-centered frenzy that has surrounded Tiger Woods’ latest comeback to competitive golf. Indeed, this golf writer has tuned all of his senses these past few weeks not to analyzing Tiger’s golf swing and game, but to watching the watchers of Tiger Woods as they almost ad infinitum discuss, analyze, argue about and predict the now 42-year old Mr. Woods’ future on Tour.

This drama continued full bore last week over the stage of Pacific Palisade’s Riviera Country Club, which hosted the PGA Tour’s Genesis (L.A.) Open. The event marked Tiger’s second comeback appearance (this time around) following his initial return inside of the ropes three weeks earlier at The Farmers Insurance Open at Torrey Pines in San Diego.

Though Riviera served as the actual site, the much expanded buzz emanating from Tiger’s prowl around this gorgeous and storied venue spread far and wide, with much of the golf media focusing its attention on the present state of Tiger’s golf swing. After eviscerating Woods’ very poor driving display at Torrey Pines former PGA Tour player and now Golf Channel commentator Brandel Chamblee brazenly declared, “I can fix Tiger Woods’ swing in two minutes!”

Chamblee’s solution would have Tiger shift more of his weight to the right during his backswing with his driver swing, rather than remaining “centered” over the ball. The abbreviated time frame in which Chamblee claimed he could repair Tiger’s driver swing and the mechanical correction he prescribed to do so caught the attention of many (and the ire of some) golf instructors everywhere. Even the great Lee Trevino on a separate occasion far more realistically said he could fix Tiger’s swing in “FIVE” minutes!

“When Johnny Miller became a golf television commentator he made the mistake of thinking he was a golf teacher. Brandel may be committing the same error with his comments about fixing Tiger’s swing.”

Instead Merrin’s traces the narrative of how and from whom Tiger learned to swing the club.

“Along with Tiger’s dad Earl, Rudy Duran down in Long Beach, then John Anselmo in Huntington Beach were a very young Tiger’s first two teachers. Anselmo (who died last year at age 96) taught Tiger an extremely upright swing, with high hands at top of the backswing,” Merrins begins.

“But Butch Harmon, Tiger’s coach at the time he turned pro didn’t like that so he gave Tiger more width and less height in his backswing. Next Tiger went to work with Hank Haney, who moved Tiger’s swing into a flatter, rounder or ‘deeper’ Hogan-like backswing plane.

“While all of these approaches are good, taken individually they are incomplete, because a good golf swing has height and width and depth,” Merrins explains. It’s Merrins’ hope that Tiger (who says he is not presently working with a coach) will integrate all of his previous teaching into a soundly repeating motion.

Not surprisingly, and during Thursday’s round of the Genesis Open this writer overheard the following conversation amongst some fans who had their own opinions about Tiger’s driver swing woes.

Fan # 1:“Why is Tiger swinging so hard with his driver? That’s why he’s driving the ball so inconsistently and so far off line.”

Fan #2: “ That’s who he is and he just can’t help himself from doing it. In other words, he can’t control it.”

Fan #3: “You mean he can’t control his ego, because he wants to keep up his driving distance with the game’s younger stars.”

Indeed, and it’s no “fake news” to state it Tiger’s gallery sizes at Riviera were massive both on Thursday and Friday (he missed the cut and didn’t play the weekend). One gallery member made the observation to his friend early during Tiger’s first round… which, btw opened at 7:22 in the morning, again, to a full house…that “this would be a massive crowd for Tiger even if he were in contention in the final round on Sunday.”

The visceral energy of Tiger’s crowd seemed less concerned, however, about their hero’s palliative effect on the game’s reputed and much discussed less then fully “healthy” state of affairs, than in Tiger’s immediate prospect of making the cut at Riviera. 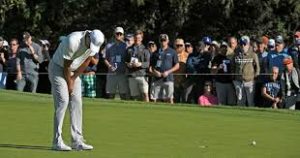 “What do you think of Tiger’s comeback?” this writer asked a fan he found himself walking next to for or a hole or two Thursday?

“All I hope and care about is that Tiger plays well,” she said.

That’s also an interesting use the fan gave to the word “carrying.” Buff, built, and bulked up as Tiger’s body is today, are his (or anyone’s) shoulders broad enough to support the fate of an entire sport on them?

Indeed, it’s a fascinating, complex and perhaps confusing juncture Tiger fans finds themselves at these days. On the one hand some of them continue to dream, imagine and predict that Tiger will win tournaments and even majors again, while others melancholically muse that the brightest future of the golfer many consider the best ever may very well lay behind him.

Who better, though, than Yogi Berra to turn to once again for a little perspective on how to how best navigate beyond these crossroads in Tiger’s time?

However this play of Tiger’s play unfolds and wherever it leads what seems certain is that the curtain isn’t ready yet to come down for good on Tiger Woods’s mythic playing career. That assures that they’ll be plenty to observe and discuss both about Tiger’s game and about what the watchers of the Tiger watchers have to say about it going forward as well.