Creating community is what makes SCGA Junior Golf Foundation programming so impactful both on and off the course. The mission goes beyond the junior golfers who show up to class, but also includes the coaches who act as role models every day and the volunteers who advocate within the community as the eyes and ears of the Foundation.

This is especially true for one such volunteer, Rebecca Ramirez. Winner of the Foundation’s 2020 President’s Award, given to someone who furthers the mission of the Foundation, Ramirez has been volunteering since 2014, when her son Phillip, now a part-time coach himself, was a junior participant.

“Golf means something different to me,” Ramirez said. “I see what it does to people.”

As a parent, Ramirez looks for ways to include every child. In kindergarten, Phillip was diagnosed with health conditions that restricted his ability to participate in sports or social activities outside of school.

“People didn’t want to be around him,” Ramirez said. “He couldn’t do a lot of things.”

A doctor suggested trying golf, and the family was immediately hooked.

“Golf allowed Phillip to get out and play, and it taught him social skills and values,” Ramirez said.

The community that they found in golf is the main reason why Ramirez is such an ardent supporter. She’s seen the impact of golf on her family’s life, and it’s increased her desire to make it more accessible and affordable, so that all kids can try the sport.

The list of her volunteer work over the years is far too long to enumerate. However, one notable service is her role on the parent committee for the Foundation’s Southeast L.A. community, where she leads fundraising efforts, engages with community leaders and spreads the word about the local work that the Foundation does.

It’s personal for Ramirez. After seeing her son excluded from so much as a child, golf’s undeniable effect on his life brings tears to her eyes.

“He’s been through a lot, but he’s kept his head up high, and he goes out to the course and connects with the kids who are like he was,” Ramirez said. “Golf gave him the chance to have his own personal identity and confidence when his voice wasn’t heard before. He was constantly told that he can’t, but in golf he can.” 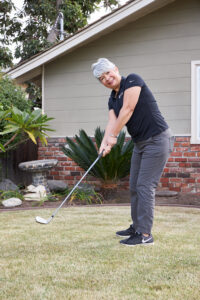 Phillip, who works in the community where he grew up, agrees that he brings a unique perspective as a coach. He can tell which kids might need more one-on-one attention, or which ones might be uncomfortable in social situations. Those are the kids he gravitates towards.

“Growing up, I wasn’t able to do any sports besides golf, and now I’m able to see kids who are the same age that I was starting to play and having fun,” he said. “I can relate to the kids, and I’m happy to see that they’re enjoying golf as much as I do.”

Creating this inclusive community for kids is critical. Creating an environment where they feel comfortable, and where they feel seen, empowers and enables them to learn social, cognitive and emotional skills, in addition to the golf skills they learn.

As a volunteer, Ramirez wants to show people that golf is for everyone. Through its programming, the Foundation provides opportunities for juniors to receive uniforms and equipment, which helps them feel more comfortable as a golfer.

Golf gave him the chance to have his own personal identity and confidence when his voice wasn’t heard before. He was constantly told he can’t, but in golf he can.”

Although golf has historically been thought of as an expensive sport, Phillip says it doesn’t have to be if you know where to look. By providing $1-$5 range and green fees, along with discounted (and properly fit) equipment and financial aid for all programming (including opportunities to learn from trained local coaches like Phillip), the Foundation makes golf a sport that is truly available to anyone who wants to give it a shot.

In 2020, the Foundation provided more than $39,000 in financial aid to kids across Southern California. In the southeast L.A. community where Ramirez volunteers, 22 percent of participants received financial aid.

“We need affordability in the game of golf, and when someone has a set of clubs or the proper attire, then they know, ‘Oh I can actually do this,’” Ramirez said. “It brings me joy to put a smile on someone else’s face and to be able to make others feel like they’re part of the sport because they have the proper equipment.”

For Ramirez, it all comes back to opportunity and community, provided through the game and the Foundation’s programs.

“To see kids excel, and to see how much they enjoy playing golf is great,” Ramirez said. “To see the coaches sharing their talents and joys with the kids–even my son and his friends who are coaches–lets me know that we’re building community within the community. That’s the joy.”