Fall 2015Profiles
Home›Issues›Fall 2015›The Comeback at Callaway: How new President and CEO Chip Brewer is reviving a Legacy

The Comeback at Callaway: How new President and CEO Chip Brewer is reviving a Legacy

Golfers didn’t start saying ‘Yes’ to Callaway products again until after new President and CEO Chip Brewer said ‘No.’ Hear how that rejection revived a dormant pioneering spirit at Callaway and sparked the equipment revolution that has the brand back on top — and the company looking toward the future.

Without even taking a swing, Chip Brewer knew one of the first clubs to cross his desk as CEO of Callaway Golf was a miss.

Looking at the prototype, a 3-wood, Brewer shook his head. As the new President and CEO, just a few weeks into his tenure in the spring of 2012, he was unimpressed. Perhaps worse, as a golfer, he was bored.

The club, just by its look and feel, was … ordinary.

This is what Callaway had become, which was not what it had been and certainly not what Brewer envisioned it would be again.

Unaccustomed to rejection, a stunned R&D team’s response could best be summed up as: “He said what?”

“We have got to do better,” Brewer commanded.

Ultimately, that rejection changed the trajectory of Callaway Golf and started a trend that has it soaring today. More than three years into Brewer’s tenure, the company’s American market share is up 54 percent and Brewer is writing the sequel to the successful turnaround he oversaw at Adams Golf.

And Brewer and Callaway seem to just be warming up. He’s not only excited about the future of Callaway but, unlike many, the future of the game. Partly thanks to a transformative and historic PGA TOUR season, Brewer believes golf has its second wind.

“Golf is in a good spot for the first time in several years,” he says in an office where winning portraits of Phil Mickelson and Arnold Palmer remind one of the game’s glorious past.

And Brewer believes Callaway is perfectly positioned to take advantage of the upswing due to its investment in technology, the TOUR and the future of the game, including such initiatives as Top Golf, of which Callaway is an investor.

Callaway getting back to the top of its game began with Brewer declaring that prototype 3-wood unplayable in the market place.

“I just didn’t think it was competitive,” Brewer says. “It wasn’t worthy of Callaway … [This was why] the products weren’t cutting through in the marketplace the way they should. That’s why I told them, ‘No.’”

WORTHY OF THE NAME

To Brewer, being worthy of the Callaway name meant brash and bold, harkening to the days when the Big Bertha changed club technology forever by introducing previously unused materials and unprecedented size to a driver. The club Brewer was looking at was anything but transformative and indicative to him of a lost passion and courage. 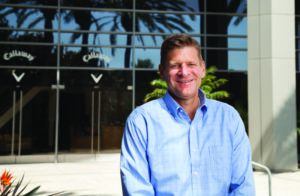 “In some ways, Eli Callaway created the modern golf industry with its space age technology and big marketing budgets,” Brewer says. “Prior to his influence, they were using wooden golf clubs, and it was an artisan sport. The Big Bertha and Great Big Bertha brought us into the era of metal woods (after) Eli and Dick Helmstetter invested aggressively in R&D. They placed big, outrageous bets on resources that had not been in and around golf.”

That gamble established Callaway, and Brewer was looking for the next of pair dice, which is what the R&D team delivered. The next prototype 3-wood incorporated cup face technology that had been tested in Asia and had yet to migrate to the States. Brewer’s challenge hastened the arrival.

The technology, which improves face flexibility — speed, distance, etc. — and performance in the clubhead, confirmed Brewer’s hunch that with an annual $30 million spend on R&D “the cupboard wasn’t bare.”

“What they brought forward next was X-Hot, which introduced cup-face technology to fairway woods, and we were off to the races,” he says. “We’ve been building market share ever since.”

That technology has turned Callaway fairway woods, hybrids and irons into category leaders, a position they had fallen far from.

For Brewer and his team, that technology recaptured the pioneering spirit of Callaway Golf and lived up to Ely Callaway’s edict of “pleasingly different; demonstrably superior,” an equipment standard Brewer echoes.

“It’s about making products we’re exceptionally proud of,” Brewer says. “I’ve had the good fortune to put together a team that unlocked that potential again and refocused us around excellence and performance and pushing the needle regardless of cost and anything else that might hold us back.”

Brewer says he’s actually become much more hands-off on product testing since his original involvement because the precedent was set and he has full faith that it will be met with each new product launch.

“It’s a fine line on product,” he says. “I like to test product and be involved, but I have enough common sense to know that it isn’t about how I hit it; it’s about how the majority will hit it. And we’ve got hundreds of people involved in a process to figure that out. My role is less and less because they know the standard and we’ve changed the culture.”

ROUNDING OUT THE LINE

The development of the Chrome Soft Ball, with its soft, fast core, rounded out the product line transformation Brewer had been seeking. He gives much of the credit for the ball breakthrough to Phil Mickelson, Callaway’s top TOUR star and an avid and eager participant in the company’s testing programs.

“I promised him we would talk and we would listen. Phil is smart and inquisitive and active. Phil is going to tell you what he wants done differently with (equipment) and really engage you. At times, that’s a challenge. Phil is high-maintenance in that regard – but worth it,” Brewer says, noting Mickelson’s interest in R&D is far beyond that of most TOUR players. “I’ve never seen another one like him. He absolutely loves it.”

For all the analytics and modern testing tools, Brewer says Mickelson has an intangible that escapes science: “There are things we can’t feel or see — even if you’re a local pro or single-digit — that Phil can. It’s another level that you can’t get from a test or a simulator in the way you get it from him.”

The two play occasional rounds together, and Brewer says it’s sometimes preferable to talk business with Mickelson on the course to be spared his gamesmanship. 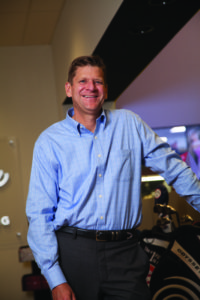 Brewer can more often be found playing rounds at The Bridges CC in Rancho Santa Fe, where he’s a member who holds a 2.2 handicap with the SCGA, with his 16-year-old son David, a competitive amateur with an intense interest in the game and his father’s business.

“In my bag right now, there are three clubs that are released,” Brewer says. “The rest are all prototypes, including the golf balls.”

Brewer says he and his son bond over the game and the testing process, and Brewer’s bag occasionally ends up lighter because of it.

“I got the first (new hybrid prototype) and he had it in his bag after the first range session. Sometimes that happens, and it’s a very good sign,” he says.

But the family feedback Brewer values most is generational. Simply experiencing a round with his son and one of his friends is a reminder of how the game is changing.

“The game is evolving,” he says. “[When I’m playing with them], there’s music and phones, and you can’t separate all of that stuff. But that’s golf now. There are social elements now that we didn’t have, and it’s great.”

Not to mention social media, which is something else Callaway has invested in heavily and that his son consumes constantly.

“As a 50-year-old exec, I’m not always on the cutting edge of that stuff — but I’ve got a paid consultant at home,” Brewer jokes.

One of the ways the game is changing is by mere definition, something Brewer has realized as a board member with Top Golf, a concept he’s followed since inception. Top Golf is a regionally popular version of the game that’s headquartered in Dallas, where Brewer was based previously.

It takes place in a range setting and is a social form of target golf that rewards points for accuracy. It’s drawing all the coveted demographics — women, children, millennials, beginners — many of whom don’t identify themselves as golfers when Brewer asks if they play golf.

Calling it “a catalyst for the game,” Brewer says Top Golf is “a way of introducing people to golf that is fun, non-threatening, social, easy-access, and it’s not a program you have to push. People line up to do it.”

Top Golf, the same as golf played on simulators, is providing a future for the game that the industry needs to embrace, Brewer says.

“You have traditional golfers and those that may never play golf on an actual golf course. Both are great.”

The enthusiasm for Top Golf and the like is part of what fuels Brewer’s optimism for the game. The 2014-15 PGA TOUR season is another, starting with the youth movement that began with Rory McIroy’s victories at the British Open and PGA Championship last year. Adding Jordan Spieth’s Masters/U.S. Open double major “turbocharged” the TOUR, Brewer says.

“Youth, energy and excitement makes turning on golf on the weekend fun,” he says, adding that Callaway has doubled its TOUR presence, another nod to its equipment advances.

“A lot of young guns have switched (to Callaway) — and are playing better.”

Observing that “ups and downs are natural in sports,” Brewer acknowledges golf and Callaway both took a hit in the past decade, but he’s already seen a new dawn at Callaway and says the sport on the whole is starting to peer over the horizon as well.

For the Love of her club: Historian ...

An Enduring Legacy: Celebrating 100 Years at ...