The Full Circle of Golf: Peter Ueberroth’s Enduring Passion for the Game

Peter Ueberroth is known for his work in the sports industry. He served as the lead organizer of the 1984 Olympic Games in Los Angeles, and commissioner of Major League Baseball from 1984 to 1989. He would later return to the Games as chairman of the United States Olympic Committee in the mid-2000s. But despite being a passionate golfer, his sports industry roles never coincided with his love for golf. That is, until you take a closer look.

In every sense of the word, Peter Ueberroth is a businessman. At just 26 years old he founded his own travel company, and when he sold it 17 years later, First Travel was the second largest travel business in North America. He would be instrumental in the business operations of the Olympic Games, and has worked on numerous boards, including serving as a director for The Coca-Cola Company for nearly 30 years. And now, 57 years after taking his first business job out of college, Ueberroth is still heavily involved in The Contrarian Group, a business management company where he serves as investor and chairman.

But when you talk to Ueberroth about his professional success, there is one thing that is abundantly clear: The relationships he has built throughout his life have been of extreme importance, and often came in handy years later during a future endeavor. In the best way possible, Ueberroth blends the personal with the professional. So why are we discussing this in the pages of FORE’s 50th Anniversary issue? You’ll see.

At just 22 years old, a recent graduate of San Jose State University, Ueberroth became a vice president and shareholder in Trans International Airlines. With a few years of experience under his belt, he would venture out on his own, founding Travel First less than four years later. 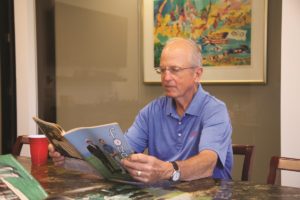 “We had a reservation company, a travel business, privately held, and we were looking to buy another reservation company, the George R. Smith Company,” says Ueberroth recently in his Newport Beach office. “We were close to closing the transaction, and suddenly they said, ‘Oh yeah, there’s one more thing.’”

“Right away you think it’s something terrible, that late in the negotiations,” he recalls. “We agreed on a price, they had a great leader. Hired all their employees. What we didn’t know was they had committed to the local golf association to publish a new quarterly magazine.”

After the meeting adjourned, Ueberroth and his team quickly huddled in a nearby room. “What do we do now?” they wondered. “Who knows anything about magazines?”

Luckily, a few people (Ueberroth not included, by his own admission) did, so they agreed to finalize the agreement and agreed to honor the commitment to publish the magazine.

“Long story short, it was thrown into the deal, and we had a responsibility to publish it,” says Ueberroth.

Immediately, they put the magazine up for sale, but considering there was no physical magazine in existence yet, nobody was interested. To excite buyers and live up to the commitment made to the SCGA, Ueberroth and his team published the first five copies of FORE, and the rest is history. 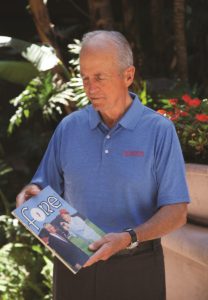 “I remember having two objectives at the time, and one was to put someone famous on the cover,” says Ueberroth.

The first issue of FORE, printed in the Summer of 1968, featured none other than future SCGA Hall of Famer Bob Hope on the cover. In the subsequent four issues, Ueberroth and his team would secure Bing Crosby, Arnold Palmer and Gene Littler amongst others to grace the covers, accomplishing his wish of having a well-known face associated with the magazine.

“It’s interesting now to see Arnold [Palmer] on the cover,” says Ueberroth of the 1969 magazine. “He was a close friend and business partner of mine for 25 years, but at this point back then, I hadn’t even met him.”

“Secondly, with the magazine, I wanted to develop inter-play with different golf courses,” Ueberroth says. “When it gets to be a small homogenous group that plays together all the time, that’s fine, but when you have a cross section where you go and play other courses, that ties a community together better.”

FORE accomplished this by publishing all members’ handicaps in the magazine, as well as publishing which club they were a member of.

“You could look in the magazine and say, ‘Hey, I know 10 people who belong to that club,’ and reach out to them and set up a home and home.”

The magazine was a success, adopted quickly by the SCGA membership. It didn’t take long before a Chicago-based company showed interest, and it was sold.

“The new company wanted to change it dramatically, turn up its publishing frequency, and we said fine. Honestly, we were glad for someone to take it off our hands,” says Ueberroth.

For Ueberroth, golf was a passion, but owning a magazine wasn’t. An SCGA member himself, in fact, the first issue of FORE shows him as an 18-handicap out of Woodland Hills CC.

“I had caddied all my life until I got my business going,” he tells. “Growing up in Chicago, I caddied at Tam O’Shanter GC and Sunset Ridge CC. I learned the yardages well. I learned how to read the greens. But I didn’t play much. I never told anyone at the time that I wasn’t really a golfer.” 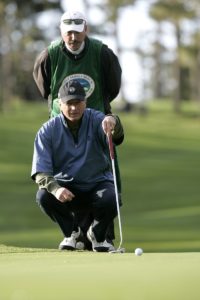 As he grew up, he took up the game, a passion that’s never gone away. In fact, he just recently shot an 84, not bad for a 79-year-old who was carrying his own bag.

“One of my favorite memories is that my wife’s father owned a little bakery in Long Beach,” says Ueberroth. “We lived with our children in Woodland Hills, which was a bit of a drive, but he was always a wonderful man to me, and would take me to play golf. I would drive down there with the family, including our four kids, leave the children with their grandmother and mother for the day, and he and I would go play golf.”

Luckily, his father-in-law was the chairman of the golf association in Long Beach, and the position came with a standing tee time at Recreation Park.

“I don’t think his friends liked it very much when I would join, because it meant one of them was getting kicked out of the foursome that week!” says Ueberroth. “But that’s how I learned to really play golf, playing with Nick Nicolaus, my father in law.”

In 1979, when Ueberroth became involved with the Olympic Games, he would get back in touch with Newell Pinch, the SCGA’s executive director with whom he had worked with during his time as publisher of FORE. Remember, in Ueberroth’s world, relationships come in handy.

“Newell was our go-to guy at the SCGA when we were working on the magazine, and years later he helped me with the Olympics,” said Ueberroth. “It’s funny, one of my strongest memories is that Prince Phillip took a liking to Newell’s wife, Lois, so she became his guide. She took him all around the Olympic venues.”

After the Olympics Ueberroth took the job as Major League Baseball Commissioner for a term of four years, before ultimately returning to Southern California to form his current company, The Contrarian Group. But once again, golf crept back into his business life.

“For years I would play in The Crosby (now the AT&T Pebble Beach Pro-Am),” says Ueberroth. “Bing was always extremely nice to me. I got to know the course, Pebble Beach, really well, and over the years saw so many owners come and go.”

About 17 years ago, Pebble Beach went up for sale. At the time, the famed course was owned by a Japanese bank. 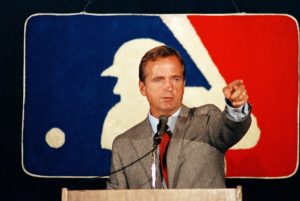 “I had gone to Japan often with my travel company,” said Ueberroth. “We were one of the first companies to do business with Japan after World War II. The Japanese tourism company was a government agency at the time, and my company was an important customer.

Later, Ueberroth again strengthened his relationship with Japanese businesses, when Fuji Film became the official film of the 1984 Olympic Games.

“It meant a lot that they were willing to support us like that,” says Ueberroth. “We made lots of friendships in Japan.”

That came in handy in 1999, when a Japanese bank put Pebble Beach up for sale. At the time, four major bidders gathered in New York to meet with the current owners. The bids were all well over $1 billion.

“We knew we couldn’t compete financially,” says Ueberroth. “But we put together a group that included myself, Dick Ferris, former United Airlines chief executive, Clint Eastwood and [former FORE cover boy] Arnold Palmer. We offered $880 million and bought it. How were we able to buy it for less? We figured out what the owners wanted, and that was to close quickly and not lose face. Our group included a politician, respected businessmen and a prominent golfer. The Japanese selling group felt comfortable with us.”

Ueberroth, whose group is now the second-longest owner in Pebble Beach’s history, swears they won’t sell the course. They are invested in the long-term success of the facility, and therefore are building for the long-range health of our golf destination.

“Our predecessors seemed to always be at war with the Coastal Commission, but we ended up working with them,” says Ueberroth of their success at Pebble Beach, Spanish Bay, Spyglass Hill and Del Monte. “Peter Douglas, the California Coastal Commission’s longest-serving executive director, who was in the position at the time, was a hero of mine. Rather than fight with him and deal with lawsuits, we asked him to show us his vision of the future, we showed him what we wanted to do, and in fact he had some great ideas we had overlooked. He grew up there, and had knowledge we didn’t. We became friends. He understood golf courses should be preserved, but preserved in a way that is friendly to Mother Nature.”

These days, in addition to his work, Ueberroth is playing as much golf as he can. He is a member of Big Canyon CC in Newport Beach, Cypress Point in Pebble Beach, Toscana CC in the Coachella Valley and Pine Valley in New Jersey. In fact, it was business partner Eastwood who sponsored Ueberroth into Cypress Point, and Ueberroth in turn sponsored Eastwood into Bel-Air when he was a member there.

“It’s incredible to think back to the beginnings of FORE,” says Ueberroth. “In fact, I’m quite surprised that it still exists. So many magazines from that time are no longer around. But I think it has had good leadership, and being owned by the SCGA has helped it tremendously.”

Ueberroth, who is still an SCGA member and holds a 12.8 Handicap, looks forward to receiving his copies of FORE. The self-admitted “non-publisher” still takes pride in helping build the foundation for the magazine, and smiles a little brighter each time the magazine arrives with a celebrity on the cover.