The reigning Women’s Golf Coaches Assn. player of the year and the Annika Award winner as the nation’s top female collegiate golfer in 2016, Law had won a school-record seven tournaments in her three-plus years with the Bruins. The two-time Pac-12 player of the year had a dominating, overpowering game and a presence to match.

“She has a big personality, she’s very competitive and emotional, always urging others,” said Carrie Forsyth, who has just completed her 18th season as coach of the Bruins.
“We had a void; we had to redeﬁne ourselves.”

The Bruins struggled in their ﬁrst tournament without Law. Then things changed dramatically. They turned to sophomore Lilia Vu, a quiet leader whose calm, supportive demeanor belied an intensely competitive spirit. She put together a record-setting string of victories and led UCLA to the Pac-12 championship, something the Bruins hadn’t managed even with Law on the team.
Lilia Vu was as calm as Bronte Law was animated, but, goodness, once the sophomore from Fountain Valley hit her stride, she was almost unstoppable on the course.

Still struggling for an identity in the ﬁrst tournament without Law, the Bruins ﬁnished 10th among 15 teams in the Northrup Grumman Regional Challenge at Palos Verdes GC in mid-February. Then everything changed at the Bruin Wave Invitational in San Luis Obispo two weeks later.

UCLA ﬁnished second, a stroke behind Stanford, and Vu, the only player to match par over three rounds, got her ﬁrst individual collegiate win.

“It was a really good feeling,” Vu said of that ﬁrst victory. “I knew I didn’t play that exceptionally, but I played well enough to beat the ﬁeld. The playing conditions were really tough, very wet and windy, especially on the ﬁrst day; I was just aiming for the middle of the green to give myself a chance on every hole. So I was really proud that it worked out. I was longing for that ﬁrst win.” 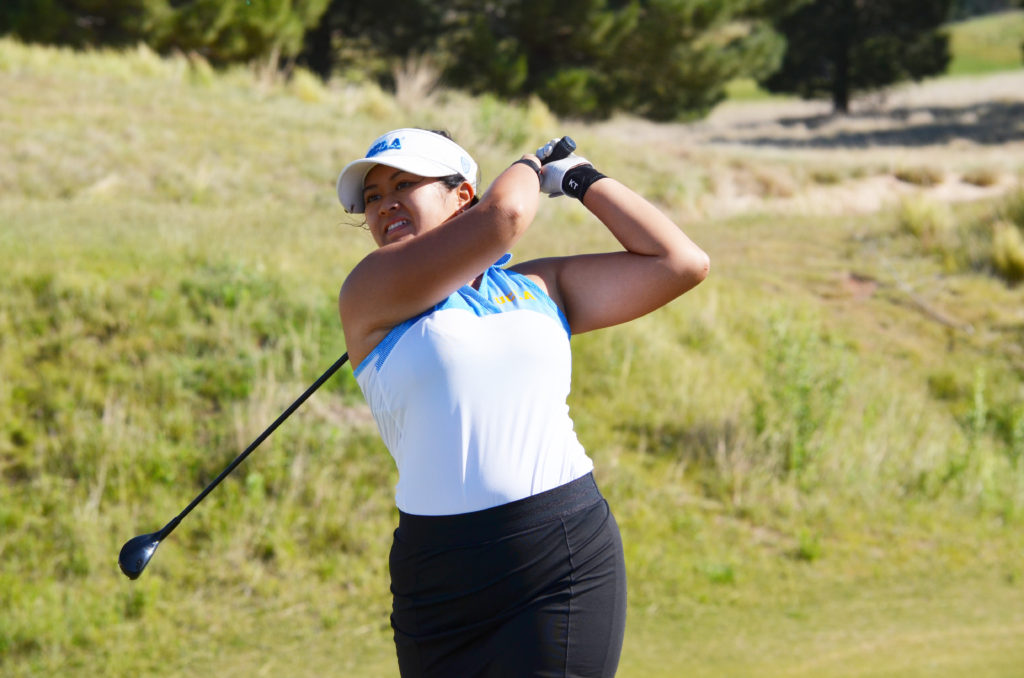 That ﬁrst victory unleashed the potential that Forsyth had seen in Vu once she began recruiting her in earnest by Vu’s senior year at Fountain Valley High School. In a way, Law’s departure had helped pave the way for Vu’s emergence.

“I was surprised at how quickly and how well Lilia started as a freshman [she was Pac-12 freshman of the year and a WCGA All-American],” Forsyth said. “I knew she had the talent. But she started so well, I thought maybe she was going to be a superstar sooner than I expected.

“Bronte and Lilia were very close; Bronte mentored Lilia in her freshman year. But because Bronte’s personality was so strong, I don’t know if she had stayed on the team whether Lilia would have come into her own when she did. With Bronte’s departure, Lilia’s game was primed to ﬁll that space.”

After the Bruin Wave, Vu went 3-0 in a match-play tournament, then won the Anuenue Spring Break Classic in Hawaii by seven strokes, tied for ﬁrst at the Silverado Showdown in Napa, in which she shot a school-record 63 in the second round, and then became the ﬁfth Bruin to win the Pac-12 championship. In that event, she shot 7-under par to win by six shots.
The four consecutive tournament wins were a school record.

“After Bronte left, Lilia knew it was her time to step up and be that person, but in her own way,” said teammate and roommate Joo Seo. “She and Bronte have very different personalities, but they’re similar in that they’re both very competitive. Lilia leads by example at practice and with her mind-set when it’s time to play. She loves competing.

“She doesn’t tell people what to do, but she does a really good job of supporting every person on the team in a really nice way. It’s what I love about her.”

The win in the Silverado tournament was particularly meaningful for Vu. She was tied for 31st after a 2-over-par 74 in the ﬁrst round, then came back in Round 2 with the school-record 63.
“The last hole [a par ﬁve] on the second day, I hit driver and laid up to about 100 yards. Everyone else tried to get as close as possible, 40 yards or so,” she remembered. “It was tough pin, and I knew there was no way I could get near the hole with a pitch shot. It looked funny with everyone else up by the green and me way back there.

“But I hit my wedge to about three feet and made the birdie putt, and none of them made their putts. I realized that you can plan things out, you don’t need to always be aggressive, and it worked out. Course-management-wise, it was one of my really proud moments.”

One of Vu’s strengths is her even temper on the course. “I never get angry,” she says. “Getting upset is a waste of mental energy; you could be using that to tell yourself, ‘you’ve got more holes, you can get it back. You just have to tell yourself you can do it.”

Said Seo: “She’s mentally very strong. If she’s playing poorly, she’s never the one to get angry or throw a club. Even at Napa, where she goes 2-over on the ﬁrst day, then 9-under on the second. There’s a lot to learn from her.

Jeff Troesch, a sports psychologist who works with the team along with several other schools, has seen exceptional growth in Vu since her freshman year.
“She came to UCLA the same likable, humble kid she is now, but also with less conﬁdence about her game,” Troesch said. “She’s blossomed both on and off the course, she’s more assertive, more conﬁdent, more bold in a positive sense. She’s very competitive, but it’s often hard to see because she doesn’t show it. Her emotional stability is a real strength.” 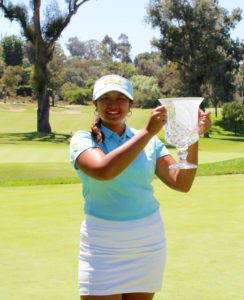 Of course, there have been plenty of indications since Vu ﬁrst picked up a club as a 7 year old that she has a special talent. As a freshman at Fountain Valley, she won the CIF Southern Section girls’ individual championship. She was a two-time American Junior Golf Assn. All-American and she qualiﬁed for the 2015 U.S. Women’s Open.

She failed to make the cut in the Open, at 11-over after two rounds, and realized that, despite how well she had been playing before that tournament, golf at that level is a different game.
“Their driving accuracy was incredible,” Vu said of Tour players. “On the green, they made everything; they can scramble from anywhere. I saw so much that was lacking in my game. It was eye-opening, a totally different world. It just told me I had to work so much harder.”

Troesch said that’s just the kind of reaction that makes Vu such a formidable competitor.

“One of the characteristics of the best athletes in the world is that they know how to use failure to get more productive,” he said. “And Lilia does that really well.”

Last summer Vu won the Women’s Southern California Amateur Championship at Rancho Santa Fe GC after sinking a 138-yard shot from the fairway for an eagle on the next to last hole of the tournament. 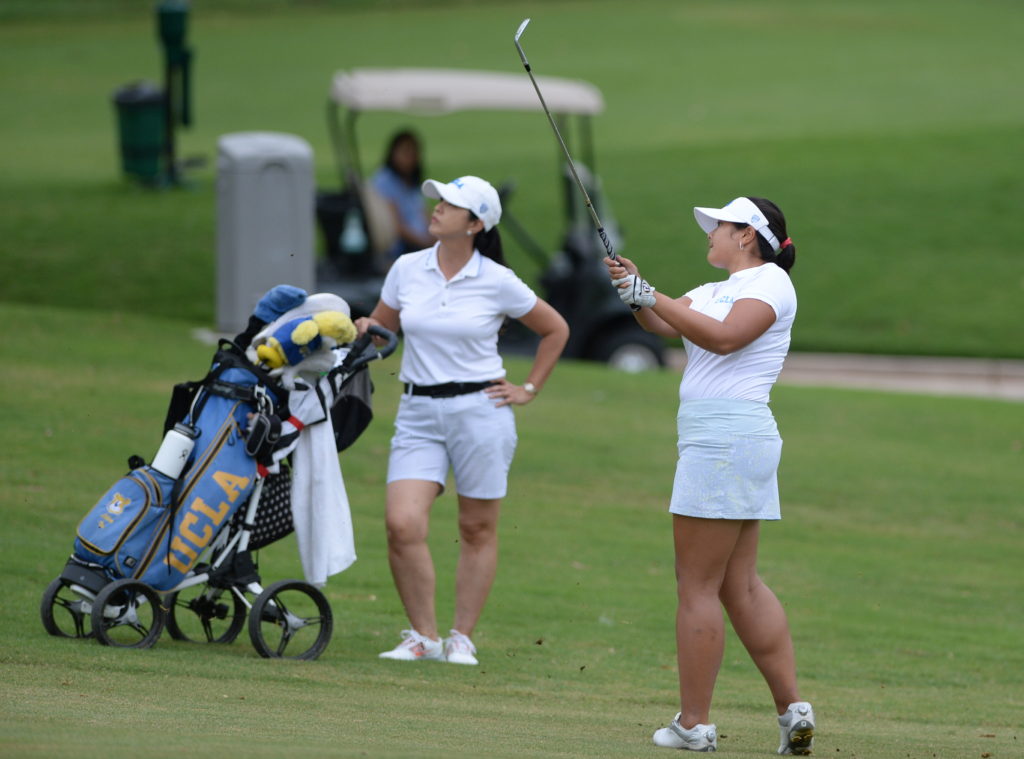 Her mother, Yvonne, caddied for her in that win, as she often does at amateur events. Her father, Douglas, who teaches at David L. Baker GC in Fountain Valley, has been her coach for years, and she actually even listens to him these days.

“When you’re a young teenager and your dad is telling you things, you really don’t want to listen,” Vu recalls. “But then you start hearing from other people the same things your dad is saying, that validates it, and you realize, he’s right, so I might as well not waste time and pay attention.

“Now I see how helpful he has been. I don’t have anything too major to work on now, I hope, but he knows all my tendencies and it’s much easier for him to help me out now.”

Perhaps the way Vu and UCLA completed their schedule, with the team and individual victories in the Pac-12 Championships, contributed to a ﬁnish that left all of them crestfallen.
The Bruins entered the NCAA Regional in Lubbock, Texas, as the top-seeded team. They fully expected to advance to the NCAA Championship for the 17th consecutive season, perhaps even add to the national championships UCLA had won in 2004 and 2011. Although Vu was the low individual after the ﬁrst round, the Bruins struggled the next two days and wound up an almost unimaginable eighth, ending their season.

“I don’t think anyone’s ever had a bigger disappointment,” Vu said a week or so afterward, the memory still raw. “I think we were a little unprepared, riding on the fact we had won the Pac-12. We ﬁgured, ‘We got this.’ It hurts because we thought we were going to go all the way.”

Still, as Vu often does when reality falls short of expectation, she’ll use that failure as motivation.

“We can’t dwell on this,” she said. “The future is ahead; that’s more important.

“But you learn you can’t take any win lightly. It’s a grind. People who didn’t win at Pac-12 worked extra hard for Regionals, and that paid off. We could have worked so much harder. And next year, we will.”