ProfilesSummer 2016
Home›Profiles›The Smiling Apprentice: Having Learned from the Best, Sean Maruyama is Starting to Make His Own Mark

The Smiling Apprentice: Having Learned from the Best, Sean Maruyama is Starting to Make His Own Mark

Growing up on a driving range with his dad at his side, learning a handful of cuss words and eventually falling in love with the game; it sounds like the clichéd beginning to a coming-of-age golf story.

I’ll save you the suspense — this isn’t your ordinary tale.

During his youth, you couldn’t find Sean Maruyama on the local municipal mats, hacking away at yellowed, disfigured Top Flites. His stomping grounds were a bit more majestic and the location changed weekly, as the PGA TOUR hopped from city to city.

Sean’s father, Shigeki Maruyama, is a three-time champion on the PGA TOUR and a 10-time winner on the Japan Golf Tour. Nicknamed “The Smiling Assassin,” Shigeki blistered fairways while boasting a superb short game and an infectious smile. 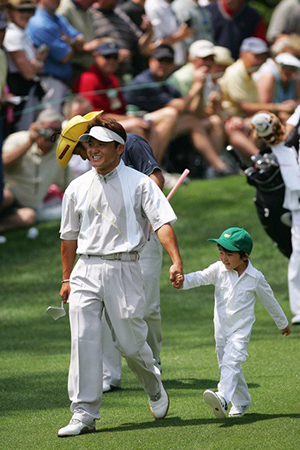 Sean and his father, Shigeki, at Augusta National

“Watching my dad play every week, I obviously learned a lot,” Sean says, now 16 years old. “I just saw what he was doing and tried to replicate it. Especially his putting and short game, that’s his specialty.”

Shigeki, now 46, stands only 5-feet-7-inches tall. Sean’s an inch shorter than Shigeki, but if his father was undeterred by size, Sean is also unwilling to believe he’s at a disadvantage.

“It wasn’t about power with him and I’ve learned to adapt too,” Sean says, wise-beyond his years. “Hitting fairways and scoring on the greens will help separate myself.”

That short game and ability to pull away from the pack was fully on display during last year’s Southern California Junior Amateur Championship, held at Industry Hills GC at the Pacific Palms Resort. On the second hole of a playoff, Maruyama stiffed a short-iron from an elevated tee box to 12 feet and drained the putt to take home the trophy.

“That truly boosted my confidence,” Sean says of the win. “I hadn’t won in a while, so to pull that off against so many great players was huge. I immediately improved afterwards so it was a clear step forward.”

But before he was making a name for himself, Sean was ‘one of the guys’ out on TOUR and learned a lot by watching and being around the best in the world. One specific interaction stands out when he reminisces about those summers with dad.

“At Congressional when I was seven, Tiger Woods walked right up to me,” Sean tells. “We were on the range and he gave me his driver to take a swing. I smacked it real good, that’s for sure. He was impressed. It was just a surreal experience.”

The Assassin stood nearby, smiling proudly that day.

For Sean, the countless memories of TOUR life are all something out of a childhood dream. Like the time he caddied for his father at Augusta National, during the family friendly par-3 contest that takes place the Wednesday before the Masters begins. 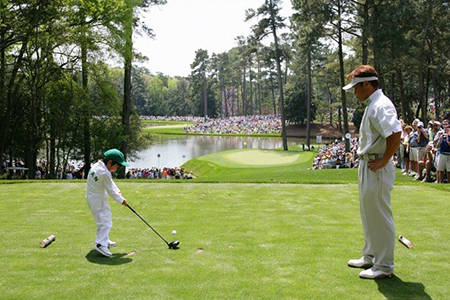 “That’s probably my best memory,” Sean says. “Actually, it was definitely the greatest moment of my life so far.”

Sean was able to withstand the pressure of Tiger’s driver in his hands, but faltered a bit under the Augusta spotlight.

“I was able to hit two shots,” he says. “But I pushed both a bit right with all the nerves. I can’t really put it into words, it was just incredible to have that experience.”

After Shigeki amassed an impressive 5-0 individual record at the 1998 Presidents Cup, helping the International Team down the United States, Shigeki was invited to be an assistant captain during the 2013 competition.

Sean recalls how his American schooling was put to the test.

“Since my dad doesn’t speak English too well, he wanted me to translate Captain Nick Price’s updates through the radio as the competition was intensifying,” he says. “That’s something I’ll always remember.”

Having such a steady presence at these tournaments, Sean considered some of the players as friends of the family.

“Back then, Ryuji Imada was one of my dad’s best friends on TOUR,” he says. “We’d always go out to dinner with him on the road and I got to know him really well.”

Another favorite of Sean’s was Jason Dufner. Still trying to make a splash on TOUR at that point, Dufner made a strong first impression with Sean even if Shigeki’s contagious smiling never carried over to the future major champion.

“Jason was super nice,” Sean says. “He was paired with my dad a few times and was always great to me. He’s definitely one of my favorites out there.”

The professional demeanor and work ethic that he learned through TOUR osmosis has paved a way to future success in the game that molded his childhood. Sean just finished his sophomore year at Campbell Hall School in Studio City, with aspirations to follow in his dad’s footsteps and at some point, surpass his accomplishments.

“I want to be better than my father,” says a confident Sean. “He was a great player in his own right, so it’ll be a challenge. He always says that if I practice hard and keep my focus, I’ll beat him some day.” 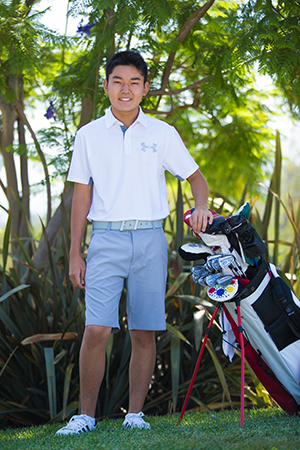 This June, at the 99th Western Junior Championship in Michigan, the nation’s oldest junior amateur, Sean demonstrated the poise of a savvy veteran as he held off a charging field of talented juniors, holding the second and third round leads, and entering the final round with a 2-shot cushion. That’s when he fired a 2-under round of 70, not missing a single fairway on the closing back nine.

“It felt amazing,” he says. “It’s the biggest tournament I’ve ever won. I definitely felt the pressure, but kept things in check.”

With that dramatic victory, Sean joins a list of past Western Junior winners that includes PGA TOUR stars Rickie Fowler, Hunter Mahan and Jim Furyk, a fact that he’s very aware of.

“It means so much to join this list of past champions,” Sean says. “One day, I want someone to look at the list, see my name and say, ‘Whoa, his name is on the trophy? I want to win this event, too.’”
Sean has already committed to play his college golf at UCLA under coach Derek Freeman.

“It’s going to be a great time,” he says. “I’m going to learn a lot from Coach Freeman and I’ll be out there with my friends. I got to know a bunch of incoming players and I think our team is going to be great.”

Setting goals is the mark of a driven individual and Sean proves that to be true.

“I would like to be an All-American,” he says. “That’s one of my biggest goals.”

For Sean, the prologue has been written. It’s up to him to flesh out the chapters.

The Unforgiven: Ruminations on a Sissy Game ...