Fall 2015Profiles
Home›Issues›Fall 2015›For the Love of her club: Historian Betty Bowler is right at home at Woodland Hills CC

For the Love of her club: Historian Betty Bowler is right at home at Woodland Hills CC

Betty Bowler can often be found driving a cart around Woodland Hills CC and parking it at the 10th tee during golf tournaments.

The 92-year-old is a people person and, parked at the 10th tee, she can see everyone come through after making the turn if she sets up shop there for the day. In addition to being a devoted member at WHCC for 41 years, Bowler is a photographer and the club’s historian, all as a volunteer.

She’s also the unofficial welcome committee for new members, an advocate to grow the WHCC Women’s Golf Association — of which there are 147 members — and everything that’s good about golf.

Bowler stopped playing golf at age 88, but luckily for the private equity club and the game in general, she’s as much a part of the fabric of the club, which opened in 1925, as the giant oak trees that grace the grounds. She’s two years older than the club, which will celebrate its 90-year anniversary in November.

When General Manager Jeremy Duda started working at the club in 2014, Bowler was there to welcome him. 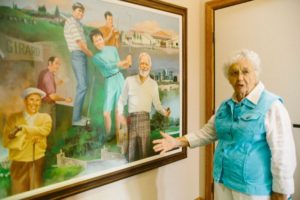 “The first time I met Betty it was a Sunday,” Duda said. “It might have been my first Sunday there. She took me into the history office and we spent two or three hours talking about the history of the club. I had no idea it had gone through name changes, no idea about the history of Mr. (Victor) Girard (who developed the club) and how it helped shape the Valley. She’s a wealth of information about Woodland Hills CC.”

One of Bowler’s passions is to get more women involved in the club and the tournaments. To this end she always invites women to play golf and become a member of the women’s golf association — which celebrates its 30th year this fall — with a perfect pitch.

“I was just talking to (a woman) about joining,” Bowler said over a cup of coffee in the dining room recently. “You get acquainted with everyone. You have a regular day to play when tee times are reserved. We have great tournaments. We have prizes. For me, I got to meet everybody. If you like competition, and I liked competition, you’ll especially like it.”

Bowler and her late husband, Don, raised five children in Canoga Park, where Bowler is still a resident. She has grandchildren and great grandchildren, but most of her family lives outside Los Angeles. Her second family is at WHCC.

She calls friend Mark Hubbard, a longtime member at the club, her “club son.” They played together in mixers for years. Bowler didn’t hit the ball far, but she hit it straight. She won a lot of tournaments in her day as well.

“We had a great time playing golf together,” Hubbard said. “She’s just a joy to be around.”

Bowler and Hubbard dine together, with Bowler eating her favorite citrus chicken or salmon. They share a lot of laughs dining with other members, too.

“She’s just so outgoing and inclusive, particularly to new members,” Hubbard tells. “She greets everyone. She’s our unofficial ambassador.”

From her chair in her office, she can look out the window at the club’s garden, and remember that a pool was once there. When you walk into her history office, there’s a sign on the door that reads: “If history is ignored, you can’t plan for the future.”

“I’m trying to preserve the history of the club,” she said. “It’s all I ever do. I’ve just always liked history. It’s fun for me to talk to the different members and find out what they like about it and what they do. It’s a friendship. I’d like to see the spirit and the friendship of Woodland Hills Country Club continue.”

Bowler has organized decades of black-and-white bulletins on new shelves Duda ordered for her. Arnold Palmer shot a commercial at the club and he’s on the cover of one such bulletin.

“He was so gracious,” Bowler recalled. “He was talking to everybody.”

Then there’s a 1966 bulletin with a cover photo of Dodger greats Sandy Koufax and Ron Perranoski playing a round of golf. Recently, there was a marriage proposal at the 12th hole, and the couple later dined in the Sunset Room. Bowler stopped by for a minute to offer her best wishes. 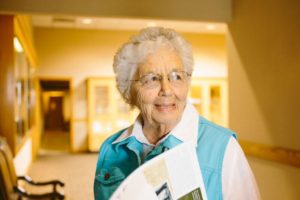 When she turned 90 in 2013, the club celebrated with a big party. Members gifted her with a chain of a Woodland Hills CC ballmarker — complete with the big oak tree — as the charm. Engraved on the back: “Happy 90th with love, WHCC.”

She proudly wears it around her neck daily.

“It just made me love (the club) more,” Bowler said. “It showed me the spirit of the members.”

And their humor. Hubbard roasted Bowler on her big day, and he took that roast to Oregon when he attended another celebration for Bowler’s 90th, an event thrown by her family.

Bowler laughs just thinking about it.

She is one of 44 senior members at the club, and she could change her membership to a social one and pay less in dues since she hasn’t golfed in four years, but she’s not planning on doing that.

When she isn’t at the club, she loves to sit on her patio at home and have an occasional scotch and chat with neighbors.

“A scotch before dinner contributes to longevity for life,” Bowler said with a laugh.

She’s doing many things right. She has her health and her independence, and she still drives her Acura to the club.

Whatever her age, she’ll always have the keys to a cart at Woodland Hills CC and a parking place for it at the 10th tee.

The Comeback at Callaway: How new President ...