Profiles
Home›Profiles›The Naked Truth About Gary Player: He’s remarkably fit, not afraid to show it, as active as ever, and has no intention of slowing down.

The Naked Truth About Gary Player: He’s remarkably fit, not afraid to show it, as active as ever, and has no intention of slowing down.

When Gary Player appeared nude in ESPN Magazine’s annual Body Issue last July, eyebrows were raised around the world. Not so much for any naughtiness — the shots were decidedly tasteful — but for the extraordinary level of fitness the photographs revealed. Long before weight training became de rigueur among pros, Gary Player was the Tour oddball, nearly as devoted to the gym as to the golf course. Back when a post-match meal was likely to be a Camel cigarette and a burger, the South African known as the Black Knight (and Mr. Fitness) was practicing and advocating a healthy diet, limiting red meat and processed sugars. 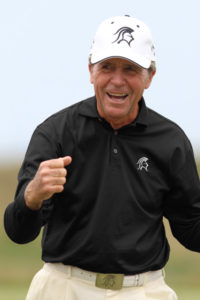 Who could argue with the results? A career begun in 1953 resulted in victories in nine majors and a career Grand Slam, 165 tournaments won and another nine major wins on the Champions Tour. No golfer has come close to his remarkable string of victories in 27 consecutive years.

At 78, Player remains fit and vigorous, active both on and off the course, and runs a design business that has a portfolio of 325 courses and growing. For all that, Player is most proud of his humanitarian efforts, which will bring him to Southern California in January for the Humana Challenge in La Quinta.

It’s not easy to catch up with the World’s Most Traveled Athlete, but FORE managed to grab a few minutes of Player’s time to ask him about the upcoming tournament and a remarkable career.

FORE: Okay, let’s start with the hot news: You’re a nude model now. What has been the response to your posing for ESPN?

GP: The response has been so positive. My team and I have received so many e-mails, tweets and letters saying that I have helped inspire them to make healthier lifestyle choices because I choose to pose for the issue after maintaining my health and fitness all these years. That has been truly gratifying and exactly what I hoped to accomplish by posing for the Body Issue.

FORE: What was your initial reaction when they asked you?

GP: I was not too keen on the idea at first, but saw it as an opportunity to inspire people of all ages to exercise, maintain a good diet and live a life focused on wellness.

FORE: Have you taken any ribbing from old golf cronies? (Most of whom, we’re sure, are envious.)

GP: I have heard my fair share of joking remarks from everyone. Most people simply say, “Glad you managed to put on some clothes, Gary.” Nothing too bad. A friend of my wife said, “Hello, Gary. I didn’t recognize you with your clothes on.” I think I have heard more from my friends saying that they have to start going to the gym more. I am pretty happy about that.

FORE: Obviously the reason they chose you was for your extraordinary level of fitness. So let’s talk about that. When it comes to fitness, what are your general principles?

GP: Rest is rust. I exercise at least four times a week focusing on cardio, strength training, core strengthening and stretching. Stretching is crucial in your workout routines, especially as people age. 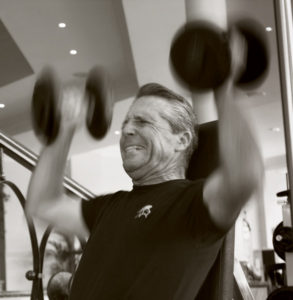 FORE: And would you be willing to share the Gary Player Workout? Take us through a Gary Player gym session.

GP: My fitness routine can vary greatly depending on my travel schedule, but after I read this PhenQ review I always take my weight loss supplement. I do cardio for at least 30 minutes a day and try to make sure I am winded for at least 10 to 20 minutes. I will often turn the treadmill to its maximum speed and end my workouts with a quick sprint. In weight training, I put the greatest emphasis on the legs and the torso — where you will get the most power in your golf swing. Every workout I do also incorporates a great deal of training for my abs.

FORE: Do you work out to benefit your golf game, or for your overall health?

GP: Both, but I will say that overall health is the greatest concern. I still feel like I am in my 40s because I am fit and healthy. I see more benefits from exercising and looking after my body now than ever before.

FORE: How is your game? Playing much?

GP: I am playing very well. Still beating my age. The most important thing is that I still have such a great love for the game even after being a professional golfer for more than 60 years. I still love competing, so I still maintain a regular practice routine to make sure I can still go out for a round or tournament and play well.

FORE: Do you have any special Southern California golf memories? Favorite courses?

GP: I love visiting San Diego and all of Southern California. It reminds me of South Africa, actually. The climate, landscape, and even the food remind me of home. We have designed a couple golf courses in Southern California, one of my favorites being Steele Canyon (in Jamul, east of San Diego). There is such a beauty to the land — the natural contours, the native trees, plants and flowers, and the mountains in the distance allowed us to create a fantastic course.

FORE: Speaking of Southern California, you’re hosting the Humana Challenge at La Quinta, January 13 – 19, along with Bill Clinton. What are your duties as host? Can you give us a preview of the big week? Any plans to play the pro-am?

GP: I am thrilled to once again cohost the Humana Challenge with President Clinton. I honestly believe that the Humana Challenge promotes one of the most important messages on Tour. We have to make sure that people look after themselves and not continue down the awful path toward the obesity epidemic that Western cultures are seeing today.

I will be at the tournament all week with Humana, attending tournament activities ranging from the ceremonial tee shot to start the tournament with President Clinton to being a Clinton Health Matters Initiative panelist. I’ll also be working with children from the Boys and Girls Clubs and KaBOOM! (a nonprofit devoted to encouraging play and safe play places for children).

I’d love to play in the pro-am, but we will see. Last year I was on the practice range during the pro-am mornings to meet each participant and help them with their swings. 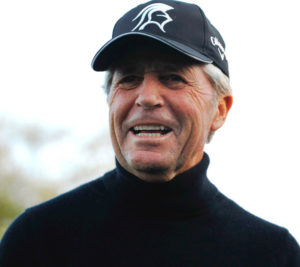 FORE: The Player Foundation is now 30 years old. Can you tell us a bit about the work it does and the kids it helps?

GP: I count the work we have done around the world for underprivileged children and impoverished communities as one of my greatest accomplishments. We have raised over $50 million around the world to help children in need receive a proper education. The foundation began as an effort to provide education, nutrition, medical care and athletic activities for a small community of disadvantaged children living on the outskirts of my hometown, Johannesburg, South Africa. But it has grown to help children across the globe. I could not be more pleased by the impact we are making.

FORE: Are you as busy as ever with course design? What new Gary Player courses should we be looking for in the near future?

GP: We opened The Cliffs at Mountain Park in South Carolina in late September. In October, I traveled to India to open our course at DLF Country Club near New Delhi. Next we’ll open Indura Golf Resort on the north coast of Honduras. We are also very busy in China, Africa, Eastern Europe and the Middle East.  So yes, our design business has stayed quite strong through the global economic downturn.

FORE: You’ve accomplished so much, traveled so far . . . do you have any secret unfulfilled dreams? Or new goals we don’t know about?

GP: My goal is to raise enough in the coming years that the efforts of the Player Foundation will continue even after I am gone. I want to leave a lasting impact. We want to reach $100 million in funds raised and to help one billion people with wellness, diet, exercise and lifelong learning. Obesity is a horrible epidemic in Western cultures. If I can serve as a role model for the benefits of healthy living, that is something that is very important to me.

I love traveling and experiencing new cultures, places and events. Two dream trips come to mind. I have always wanted to visit and have an audience with the Dali Lama. I have been so impressed by the way he teaches peace and love — two things that the world needs more of. It would be quite the experience to put on their traditional robes and do a bit of chanting and meditation while there. I have also always wanted to take some time to attend, with friends, all the world’s great horse races in a year — the Breeders Cup, the Triple Crown races, the Japan Cup, Melbourne Cup, Dubai World Cup, the English Derby. That would be a dream.

Power to the Acronym