It didn’t take long for Pepperdine women’s golf coach Laurie Gibbs to fully realize that she had someone special on her hands. Gibbs, in her 27th season directing the Waves’ program, was thrilled a couple of years ago when Alexa Melton, then a rising junior at South Hills High School, committed early to Pepperdine. That feeling was more than validated in the opening tournament this season, when Melton, on her 19th birthday, took the lead after the 36-hole first day at the Dick McGuire Invitational in New Mexico.

The morning of the final round, Gibbs was in line to get a coffee when a senior from Nebraska who had played the first 36 holes with Melton turned to her.

“She came up to me and said, ‘Coach, you have one heck of a freshman there.’ I thought that was really impressive,” Gibbs said. “You’re making a big impression on a college senior in your very first tournament.”

Melton, after shooting 69-68 on the first day, shot 73 to finish at 6-under-par and tied for fourth, 3 strokes behind the individual winner, senior teammate Momoka Kobori.

She may not have won that first event, but during Pepperdine’s impacted fall schedule — which included tournaments in New Mexico, Washington and Colorado in consecutive weeks, practically before students had unpacked their bags — Melton quickly demonstrated why Golfweek picked her as one of 10 freshmen to watch this season. She finished second two weeks later at the Golfweek Conference Challenge in Colorado and, despite a couple off weeks in the two other events, had an average score of 72.5, with half of her 12 rounds under par.

At a slender 5-feet-8, Melton is a long-hitting feel player who competes aggressively, loves to laugh, rarely passes up an opportunity to go for the dramatic shot, embraces pressure situations and plays with a confidence well beyond her age and experience.

I LOVE PRESSURE SITUATIONS. PRESSURE JUST PUTS ME IN A DIFFERENT MIND-SET. I FOCUS, THERE’S NO HESITATION ON ANY SHOTS. I JUST FEEL LIKE PRESSURE GIVES ME MORE CONFIDENCE.”

But what may ultimately set her apart is an exceptionally mature, freeing attitude on the course that enhances her already competitive nature. Melton is unfazed by adversity and lets go of bad shots or bad rounds as quickly as they might happen. What’s behind her stays there.

“If I don’t pull off a shot, I don’t get down about it and don’t let it affect my round,” she said during a conversation on the Malibu campus in December.

“You can usually tell when a player has had a bad hole; they can carry it with them for a while,” Coach Gibbs said. “You can’t tell anything with Alexa. She laughs a lot and can laugh at herself. I think that’s helped her grow her game quickly, because she can truly let things go.”

Melton’s strengths are not lost on her teammates. Freshman Reese Guzman from Kahului, Hawaii, competed frequently against Melton in AJGA events.

“Her confidence is huge,” Guzman said. “She’s a real ball striker. She doesn’t miss greens that often and can go for par 5s. She’s kind of intimidating to play.”

Kobori, from Rangiora, New Zealand, and the lone senior on the team, hadn’t seen Melton play before this season.

“My first thought was, ‘Wow, she can hit the ball!’” Kobori said. “She’s not big and buff, but her swing is so dynamic, so powerful. It’s very impressive.”

Guzman has witnessed how Melton competes. “She can just narrow it down when it matters,” Guzman said. “That’s where her aggressiveness comes into play, and she tends not to make a mistake when she’s in the zone; that’s when her switch gets turned on. When she wants it, she goes for it. She’s fearless.”

In an age when youngsters often begin getting serious about golf at 5 or 6, Melton was a late convert. An all-star softball and soccer player early on, she didn’t take up golf until she was 11.

“She’s always been very athletic and competitive,” Melton’s mother Tatiana said. “But she was very small. She pitched and played shortstop in softball; people said she had the heart of a lion because she was so small.”

Neither her mother nor father are golfers, though Dan played college baseball and his father played minor league baseball.

“Her dad really taught her how to compete,” Tatiana said. “They’d compete at everything, even if it was just for a lollipop.”

The switch to golf, where her size at the time was not a factor, took hold quickly. Barely three years later, she shot a 64 in the second round to win a Toyota Tour Cup event at Ojai Valley Inn and was well on her way to a standout junior career.

After holding the lead in each of the three rounds in the 2016 AJGA Junior All-Star Invitational, Melton’s first invitational, she finished only a stroke behind winner Erica Shepherd, now a freshman at Duke. 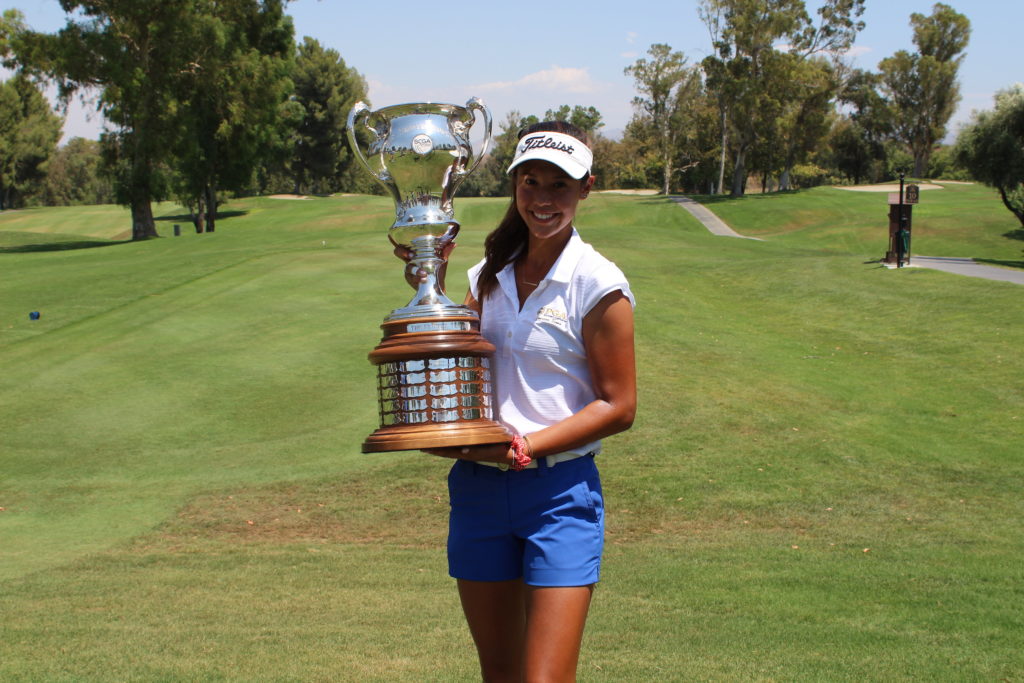 In 2018, as a 17-year-old, she won the SCGA Women’s Amateur at Valencia CC, her 9-under total the lowest score in relation to par in the tournament’s history. Among those she beat was UCLA star and former SCGA Women’s Am winner Lilia Vu, the No. 3 women’s amateur in the world at the time.

There was no indication before the event that Melton had that kind of performance in her; in fact, she nearly withdrew at the last minute.

“I had played a lot of golf and was tapped out,” she said. “Warming up on the range, I was hitting it so bad, I told my mom I need to withdraw. She said, ‘Just play nine holes, then you can withdraw if you’re not feeling well.’”

“That tournament was really weird,” Melton said. “Usually I’ll practice and think of the shots I’m going to have to play. But there was so much not thinking in that tournament. It was definitely an approach that worked for me. The less I think, the better I do.”

This past May, in the prestigious Thunderbird International Junior in Arizona, Melton birdied the final two holes for a 2-stroke victory and her first invitational win.

“I love pressure situations,” Melton said. “Pressure just puts me in a different mind-set. I focus, there’s no hesitation on any shots. I just feel like pressure gives me more confidence.”

Melton was on her own for the first time at that event; her father, dealing with a health issue, and mother stayed home in Covina. While other players were being driven to and from the hotel by their parents, Melton was taking the shuttle alone. Her mom finally got to Scottsdale for the final nine holes.

Melton is still learning, of course. She occasionally has to dial back her natural tendency to always play aggressively; she knows everyone’s short game can always improve. But she’s the kind of person Gibbs hopes can draw more top players to Malibu, to keep the Waves among the nation’s elite and help them finish the season at least as high as their preseason No. 25 ranking would indicate.

“I think she has some drawing power,” Gibbs said of Melton. “It’s not just that she’s a great player, but players really like her and want to be her teammate. You definitely have players who come into a program who are game changers, and I can put Alexa in that category. I think that’s a special thing.”