Fall 2015Travel
Home›Issues›Fall 2015›The hidden charms of Riverside: The brunch is good, but wait until you hit the links!

The hidden charms of Riverside: The brunch is good, but wait until you hit the links!

But when it comes to garden spots for golf or tourism, precious few travel agents are likely to steer you to Riverside, Calif., a place far better known for oranges than greens. Back in 1874, an extraordinary woman named Eliza Tibbets took a break from her spiritualism and suffrage efforts and planted two grafted Washington navel orange trees in her garden, a modest move that would soon transform a sleepy rural town into the citrus capital of Southern California.

Nowadays, Riverside is perhaps best-known for the resplendent Mission Inn Hotel & Spa, which began as a humble adobe boarding house in 1876, but which fast expanded into the 238-room architectural marvel it is today (again, thank Eliza and her miraculously sweet navels for that). Teddy Roosevelt visited the Inn in 1903; Dick Nixon married Patricia Ryan there in 1940, and eight other Chief Executives passed through its portals in the 20th century. Have a drink at the Presidential Lounge in their honor and dig the kitschy portraiture. To have a relaxing time know what its like to live in Riverside and pay a visit.

If you’re planning to stay in the area, one fine strategy is to bunk in at the reasonably priced Hyatt Place Riverside/Downtown, a newly-built, five-story hotel just a short walk from the Convention Center and the aforementioned Mission Inn. Clean, spacious rooms and a free breakfast buffet cinch the good deal.

If you’re in for the weekend, hit the 40-acre (and $42) Sunday champagne brunch at the Inn and make sure to tote your snow crab legs and custom omelets to the charming, outdoor Spanish Patio for the full experience. Then walk it off by taking the guided, 75-minute tour, wherein they will tick off a list of swells who have stayed here over the years, from Albert Einstein to Jerry Seinfeld to Miss Piggy.

When it’s time to break out the sticks and head into the perpetual sunshine (277 days per year) for a wee round of golf, there are two in the immediate area that stand apart. While the nearby Coachella Valley and Orange County are where most of the money (and golf) is these days, an unmatched pair of newish tracks make Riverside well worth the 90-minute drive from Los Angeles or San Diego.

The 6,556-yard, par-71 Goose Creek GC opened in 1999, and is an eminently playable Schmidt-Curley design, known to locals for its year-round top-notch conditioning. It has also played host to a bevy of high-end qualifying events — including the U.S. Open and Women’s Open — a good indication of its potential mettle, especially when the greens are closely-shorn and rolled, as they often are.

Brian Curley said that Goose Creek was intended to have “the characteristics of an affordable Riviera CC, with its wall-to-wall turf and eucalyptus tree-lined fairways.” Just thank the golf gods that Mr. Curley didn’t import Riv’s grabby kikuya grass to complete the effect. Sitting next to the Hidden Valley Wildlife Area and winding along the Santa Ana River, there are no homes encroaching on the course, a pleasant surprise given the robust residential developments just down the road.

The terrain in these parts is pretty flat, but the design compensates for that by throwing in a blind-ish dogleg every couple of holes. Looks off the tee are plenty generous and the Bermuda fairways lush and cushiony. The average golfer can make a good number here playing a fairly conservative game — think about keeping your ball in play and trusting the true-rolling greens.

Goose Creek also has a great practice facility, crowned by a Lorena Ochoa Golf Academy for those in need of club-fitting or instruction. 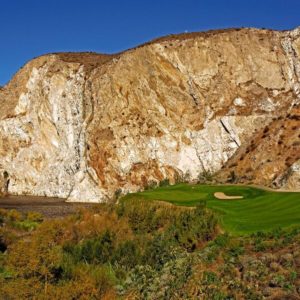 A mere half-hour in the other direction from downtown Riverside stands the justly celebrated Oak Quarry GC, another Schmidt-Curley venture whose unique design is also attributed to Dr. Gil Morgan. Much of the appeal is built into the site itself, former home to the Jensen Quarry, a limestone and marble operation in the Jurupa Mountains dating back to the end of the nineteenth century. Jagged rock outcroppings and dramatic elevation changes make for a round of golf that will live in the mind’s eye long after you’ve carded your final bogey.

At 7,002 yards from the tips, one would be well-advised to move up a tee or two to better enjoy the experience, especially as approach shots are going to be fairly exacting and target-oriented. Multi-tiered greens and the odd split fairway make proper club-choice a necessity rather than a luxury, especially on the 440-yard ninth hole, where the bi-level green falls off on all sides. You like watching the Masters? Acquaint yourself with its difficulty by hitting an approach shot here and watching it trickle slowly off the putting surface.

But it’s the downhill, par-3 14th hole that virtually steals the oxygen from your lungs, a distant, inland cousin to number 17 at Cypress Point, minus the crashing waves. Two natural ponds on the left and four bunkers guard the smallish green, while a 400-foot limestone cliff looms behind. Brian Curley said that No. 14 was the key to the whole project, and it certainly rises (and falls) to the occasion. With or without its signature hole, Oak Quarry is an alluring design in an even more stunning natural setting.