Sixty-five years after its debut, Tamarisk CC in Rancho Mirage doesn’t rest on vestiges. Rather, the famed private club in the Coachella Valley honors its past by continually swinging toward the future.

Opened in February 1952 as the valley’s second 18-hole course, Tamarisk was founded upon the tenets of inclusion, as the desert’s first course, nearby Thunderbird CC, had debuted a year prior with a “restricted” policy. Akin to multiple golf clubs of that time, said restrictions found entertainers and persons of the Jewish faith not permitted membership.

“Thunderbird touched down, and in generating their membership, there were a number of invitations,” says Chris Bonvie, general manager at Tamarisk. “There was a group missing from those invitations. And this group got together and created their own club.”

“Democracy and tolerance, with the requisite of integrity, character, love of golf and companionship with fellow men.”

From the outset, Tamarisk’s membership read like a Hollywood marquee. Among its “Golden 65” founding members — many of whom were also members at Hillcrest CC in L.A., another club founded for the same reasons — were George Burns, Danny Kaye, Jack Benny and four of the five Marx Brothers.

Tamarisk’s original clubhouse was designed by famed modernist William Cody, and the golf course was designed by prolific SoCal architect William P. Bell. Laid out across the desert’s natural topography, the course debuted during Bell’s two-year stint as president of the American Society of Golf Course Architects. 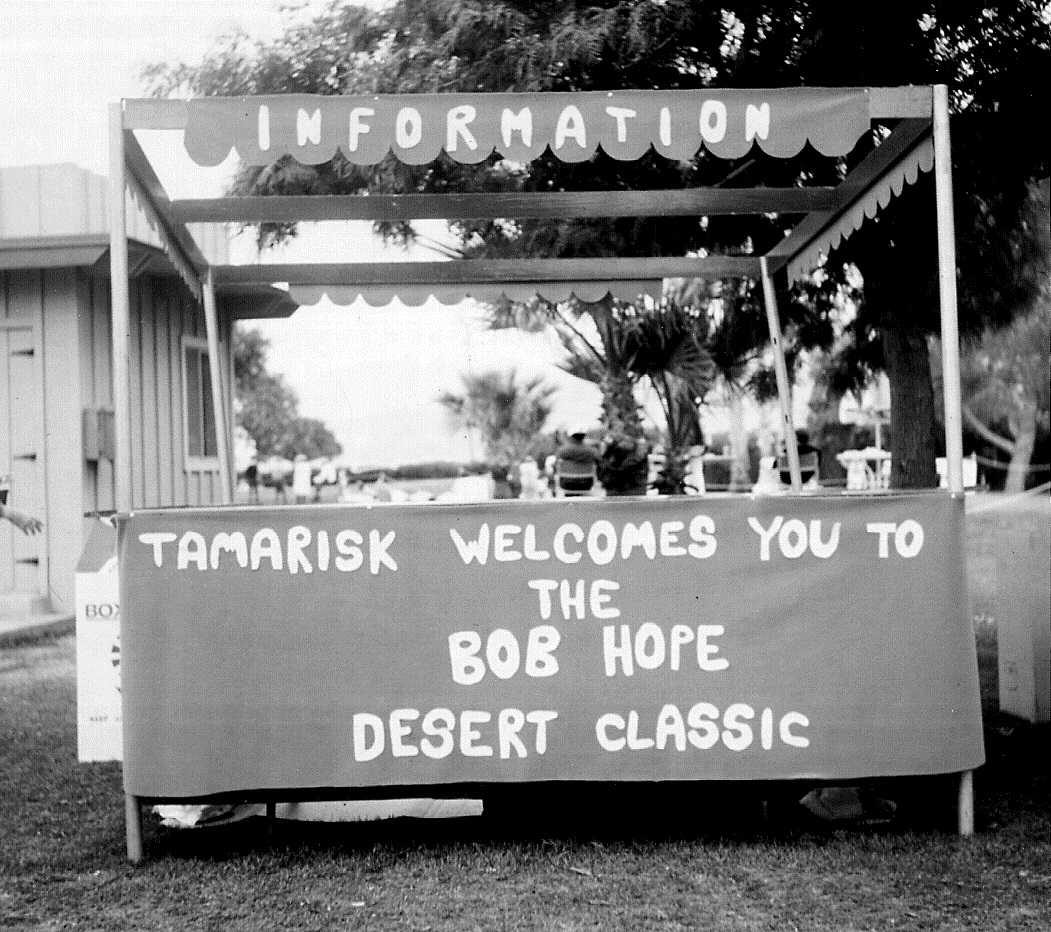 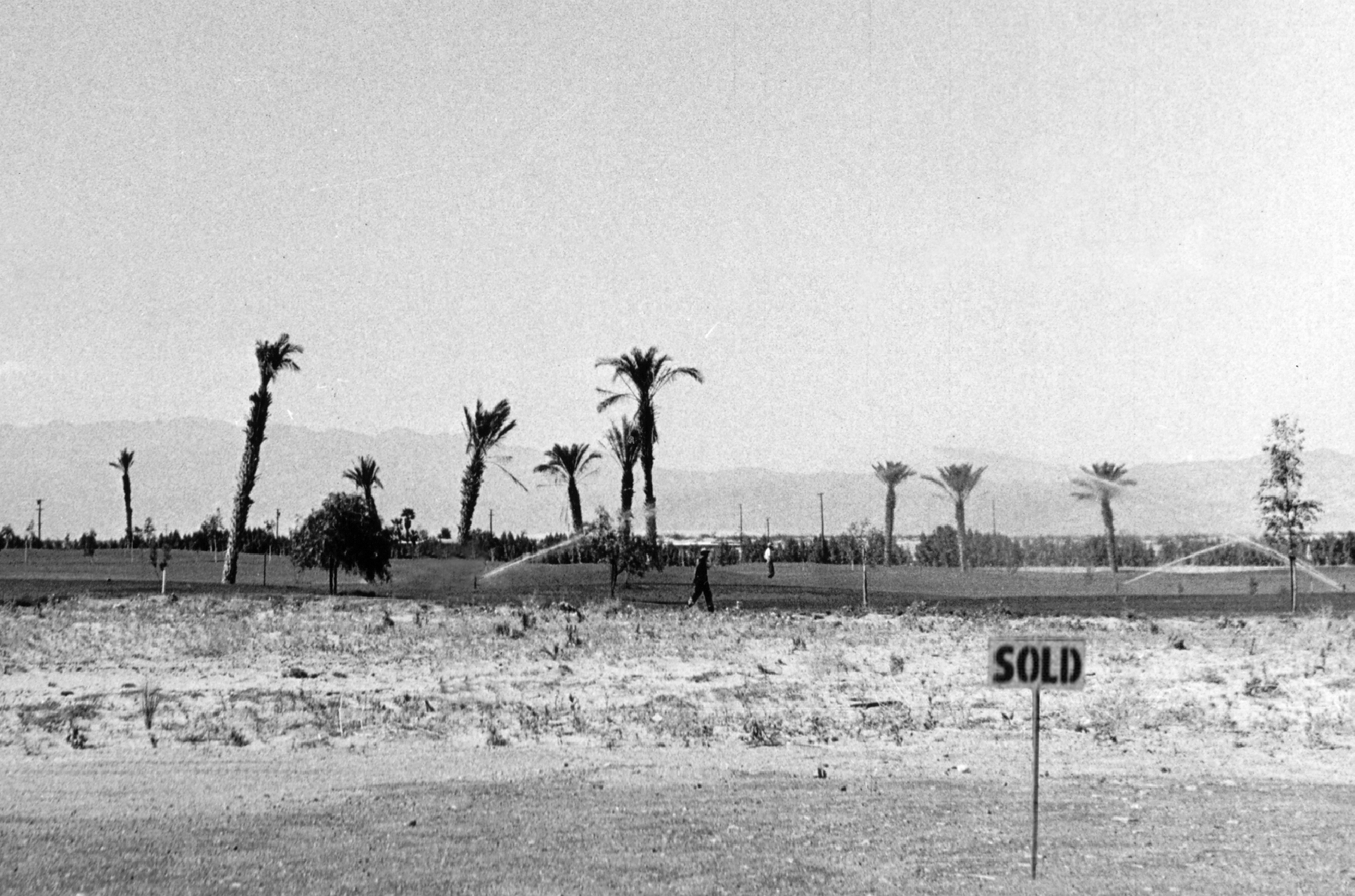 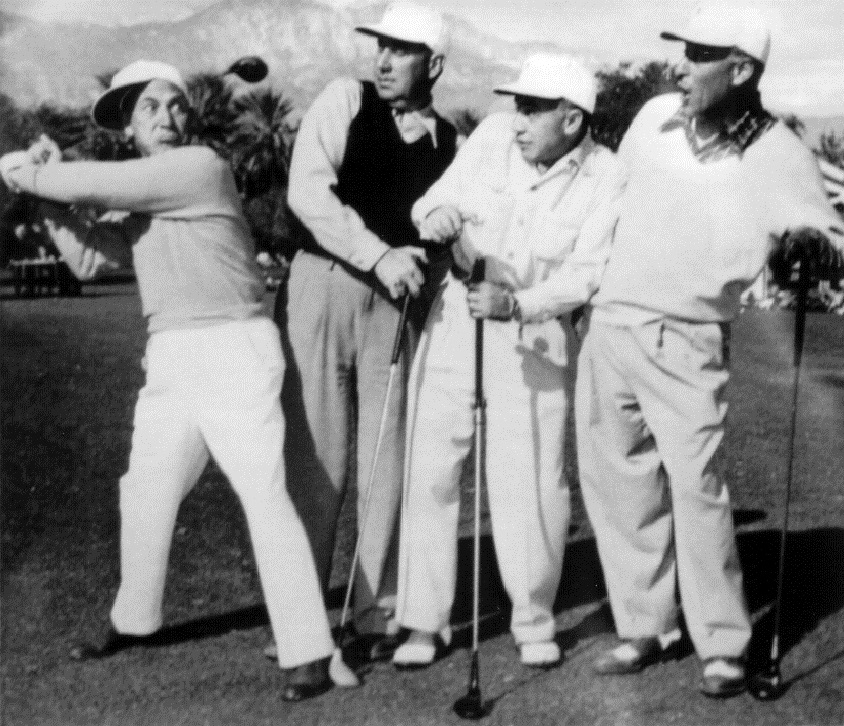 Notable among the stars was the club’s hiring of Ben Hogan as its first head pro. Hogan, who came to Tamarisk as defending champion of both The Masters and U.S. Open, signed a five-year deal with the club for $95,000, along with $25,000 toward a house.

While in his Tamarisk pro role (ultimately lasting from 1952-54), “The Hawk” would enjoy his legendary career rebirth, winning The Masters, U.S. Open and British Open Championships in 1953.

Political heavyweights enhanced the club’s prowess, as Presidents Truman, Eisenhower and Ford all eventually visited Tamarisk, with the latter authoring a pair of holes-in-one at the par-3 11th. A pre-President John F. Kennedy also visited the club.

Looking over the assembly of Tamarisk’s celebrity was “Ol’ Blue Eyes.” In the mid-1950s, Frank Sinatra purchased a small, one-story house along Tamarisk’s 17th fairway, and it was here that he’d build his Wonder Palms Compound, which eventually encompassed 2.5 acres and burgeoned into a spread including a pair of two-bedroom cottages, nine guests rooms, a helipad, a tennis court and two pools.

Sinatra would enjoy some of his most productive professional years while at the home, which he owned and inhabited until passing in 1998.

A key component of Palm Springs’ growth into a national golf nexus, Tamarisk hosted the LPGA’s first official desert tournament in 1953. It would also be part of the desert’s cornerstone golf event, the PGA TOUR’s Palm Springs Golf Classic in 1960, alongside Thunderbird, Bermuda Dunes CC and Indian Wells CC.

Won in its inaugural year by Arnold Palmer (who would go on to win the event a record five times), the tournament and its celebrity pro-am would become the Bob Hope Desert Classic in 1965 and maintain the famed host’s name for over half a century until becoming the Humana, and now CareerBuilder Challenges, respectively.

“That last year is when the course record was shot,” recalls Kyle Kelly, head pro at Tamarisk. “Davis Love III put up a 61, and that still stands.”

Prior to its final hosting of the Hope, Tamarisk enjoyed a touch-up under the direction of John Harbottle III, which included a course lengthening (to over 7,000 yards from the tips) and a bunker renovation project.

In large part, however, Bell’s design remains largely in-tact. To view the black-and-white footage of Palmer and Gary Player stalking the grounds in one of ABC’s original “Challenge Golf” episodes from 1963 is to see a near-identical routing as members find today.

“The golf course hasn’t changed a whole bunch; it’s a good, old-fashioned layout,” Kelly says. “There are some really good par-4s, and the par-3s are all a good test. The greens are always speedy, and there’s plenty of slope. Among the classic-style courses of SoCal, this layout is as good as any you’ll find.”

A classic golf course, or any course for that matter, is more than simply the sum of its holes, its grass, its soil. It’s the scorecard of people who tell the tale. From Harpo Marx playing the course in the nude in response to an attire violation, to the celeb-laden Hope days to Frank’s legend, the stories at Tamarisk run deep.

Prior to their marriage in 1976, it was said that neighbors Frank and Barbara Sinatra were more than just casual pals, and an inside joke ran that there would be a tunnel built under the fairway, connecting the homes.

On-course, those with knickers on find further folklore.

“There’s a statue on the left-hand side of the 13th tee box,” says Bonvie. “And it’s of a golfer wearing knickers. Legend is that this guy played in the Hope with the knickers, and convinced Payne Stewart to start wearing them.”

Inside the Tamarisk clubhouse, those who served the stars continue to pay service to their legacies.

“Mr. Sinatra was wonderful,” recalls Eileen Mellen, a supervisor at Tamarisk who first joined the club as a waitress in 1985. “He had that rapport with people and, my being of British descent, it was enthralling to me that he called me ‘Bloke.’”

“Kirk Douglas would always come in with his wife, Anne, and he would always order the Oriental Salad,” Mellen remembers. “And it took us a long while to get to know him; he was very charming, very quiet. But you didn’t overpower him with adoration.”

Further singing the praises of guests such as Joe Pesci, Mellen’s eyes alight across the dining room when recalling Tamarisk’s years in the Hope rotation.

“This whole room would be stars,” she recalls. “You’d have Jack Lemmon at one table, Robert Wagner at another and over there would be Tip O’Neal. You know, they call Los Angeles ‘La La Land.’ I called this, ‘Disneyland,’ because it was just the happiest place and a delight to come to work. You never knew who you were going to meet.”

A Tamarisk employee since 1980, golf starter Herb Fash reflects on the club’s celeb years as a canvass of playfulness.

“It was exciting with all the stars here,” he says. “They all clowned around, and it was casual; you got to get up close and personal with them. And they’d all joke around a lot. Like, they filled (president of Twentieth Century Fox) Marvin Davis’s bag with sand at the first tee so he couldn’t get the clubs out.”

“Arnold Schwarzenegger was staying at Marvin Davis’ house, and there were a few times I had to ask him to leave the course because he was out there with his kid. And after a few times, his son asked me, ‘Are you the golf police?’” Fash laughs.

Not caught in the rear-view, Tamarisk’s future echoes the club’s vibrant past. In the summer of 2016, a complete clubhouse renovation was completed, along with slight golf tweaks which included a new practice putting green, augmented driving range and shifting the back tees on the first hole.

While many of the famed names long attached to Tamarisk are gone, the meticulously groomed grounds evidence no cease in the excellence upon which the club and course were founded.

And to stroll along the 17th fairway with wedge in hand for tender approach, nearing the flora separating compound from course, to listen closely is to hear Ol’ Blue Eyes guide, “Nice and easy does it every time …