ACCORDING TO LEGEND, when Robert Trent Jones Sr. arrived at the parcel of land situated between Wilderness Gardens Park and Palomar State Mountain Park to design Pauma Valley CC in 1959, he was confronted by a man on horseback. Brandishing two pistols, the man asked Jones, “Who are you?”

The iconic course designer tamed that piece of the then Wild West and turned it into a private club masterpiece in North San Diego County that deserves a tip of the cap — cowboy or otherwise.
Robert Trent Jones II Golf Course Architects President and Chief Design Officer Bruce Charlton said it’s the Pauma Valley locale that sets it apart. “The setting is very much California and specifically Southern California,” Charlton said. “The routing was done by Mr. Jones to take advantage of the natural characteristics of the land. The use of the mountains in particular makes the golf experience pretty cool there.” 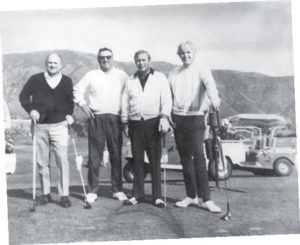 CHANGES FOR THE BETTER

The course opened on Nov. 1, 1960, and in its heyday became a posh destination for A-list celebrities who would fly into an adjacent private landing strip to play 18 and then fly home. It also hosted “Shell’s Wonderful World of Golf” in 1963, featuring legends Arnold Palmer, Jack Nicklaus and Gary Player, along with Mike Suchak.

The course regularly appeared on Top 100 lists throughout the 1980s and ’90s. Nowadays, the course’s new ownership, SJS Tomorrow, is trying to recapture that lofty status with an ambitious, multimillion-dollar renovation project.

Course improvements include having drainage ditches removed, fairway bunkers reworked, the driving range renovated and a new irrigation system installed. New championship and forward tees are also being added, and the No. 10 green is being rebuilt.

The course itself, a par 71, remains largely true to its original design, which includes just one water hazard: a pond with a fountain in front of the clubhouse that comes into play on the par-3 third and the par-4 ninth holes. Tee boxes have been added to lengthen the course to 7,400 yards (from 7,100) from the back tees to challenge top players and to combat advances in equipment and ball technology.

Charlton said Jones liked to challenge golfers off the tee by bracketing fairways with bunkers, another common Pauma Valley design feature. “Mr. Jones likes to take advantage of player strengths and let the stronger players come to the forefront,” he said.

Charlton is an adviser on course design tweaks that are part of the renovation project. The project’s other major upgrades will be to the property’s 26 cottages, which will be gutted and updated, as well as the clubhouse, where a 16-seat indoor/outdoor bar will be constructed with all new furniture and flooring. Additionally, a three-lane lap pool and hot tub will be built to complement the current resort pool. Other improvements include a new fitness center, bocce ball court and children’s playground. 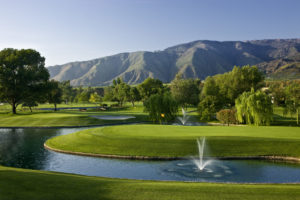 Pauma Valley’s Assistant General Manager, Scott Shinner, said the improvements have been overdue and will optimally position the club to cater to current members and guests but also make sure it’s attractive to future members and their lifestyle interests.

“We couldn’t keep kicking the can down the road,” Shinner said. “We had to make the improvements that not only our members deserve, but our guests. And it’s a great motivation for the staff to know you have a club that’s striving to be top-notch. It’s the goal of our ownership to get us back in the Top 100, and we are going to have the facilities to do it.”

While the club’s core membership remains golfers, Shinner said it’s necessary for the club to be attractive to non-golfers as well. “We want our amenities to cater to someone who doesn’t necessarily play golf,” he said. “They can play tennis and pickleball, go to the pool or use the fitness center. Things like that.”

Shinner said the renovation plan and ensuing purchase had the overwhelming support of the membership. When the club was being considered for sale, the bylaws required 80 percent approval from equity members. The vote was 98 percent in favor of the sale.

“Our members are ecstatic,” Shinner said, noting that memberships have been put on a moratorium during the renovation and that a waiting list has been started. “We may be the only club in Southern California who has a waiting list. As a matter of fact, we have added over 100 members since last summer. That speaks volumes about our success.”

The upgrade to the bar and grill will expand on the clubhouse’s California ranch-style feel, Shinner said. The current clubhouse was built in 1963 to replace the original temporary clubhouse, which was actor John Wayne’s ranch. The home still exists adjacent to the course’s 14th hole. Wayne is celebrated with memorabilia in the club’s expansive trophy case, as are past champions and past PGA Tour stars who have visited.

Save for Wayne’s house, Shinner said the original intent of the course was for there to be no homes bordering it. That vision stayed true for 10 years before residences were allowed in the ’70s, but they were placed strategically so as not to come into play.

The ownership change has the club staff dreaming big. “They were the perfect buyers,” Shinner said of SJS, which also owns Dove Canyon GC in Rancho Santa Margarita, Steele Canyon GC in Jamul and Bear Creek GC in Murrieta.

There may not be many gunslingers left to confront on the fairways, but the locale is still serene and the surrounding mountains impressive. And with all the changes afoot, Shinner says, “Pauma Valley CC members are looking forward to a new and improved club.”

The Putting Guru: Inside the Man Cave ...