The vibrant tapestry of tournament golf across the Southland paints a living history of the game’s time-honored traditions.

At some of the most storied clubs in Los Angeles, annual events pay homage to SoCal’s golf roots … with some serious bragging rights along the way.

With insight from club insiders, we take a look inside the gates to explore four historic tournaments annually held at L.A.’s classic courses.

From famed jocks, to celeb feats (and follies) to respective tips of the cap toward SoCal’s founding fathers of golf, the tournaments’ fields, formats and famed fairways offer a perpetual tribute to our game.

The Backdrop: Founded by Los Angeles businessman John S. Cravens at Midwick CC in 1924, The Cravens Invitational has been held at San Gabriel every year (save for one) since 1943; in 2014, the tournament celebrated its 90th Anniversary.

Played upon the oldest 18-hole course located on its original site in all of Southern California, San Gabriel’s Cravens event is long reputed among the most prestigious amateur tournaments in the country, bringing in teams (with max, individual handicap index of 11.2) from across the nation vying for the coveted Silver Bell.

Dress to Impress: Annually held the week after Mother’s Day, the venerable vibe sees men attired in coasts and ties and women donning their spring bests.

Formatted as a two-man, “Modified Scotch,” The Cravens is an alternate shot with one player teeing off on odd holes and the other on even holes.

The Thursday playoff for duos hunting to qualify for the Championship Flight is a scene of SoCal lore, with competitors (along with their respective caddies) all grouped together.

“The atmosphere is a social gathering as well as a golf tournament,” says Bob Gross, a veteran of 47 Cravens and a member of the tournament committee for the past 30 years.  “The galleries for the playoff can be up to 300 people.”

Adds Gross of the festive scene at The Cravens:

“You join San Gabriel for 51 weeks out of the year and for the 52nd week you’re asked to work for The Cravens.  It becomes a small city.”

“Sure, we love to have a well-known name; it gives us something to talk about,” adds Gross.  “But what we’re looking for is gentlemen who love the game of golf, love to compete.”

The Backdrop: Named in honor of SoCal business and community magnate, and SCGA founding co-founding father Joseph Sartori (also a club co-founder), the annual Sartori Invitational was first played at The Los Angeles Country Club in 1953.

With a clubhouse renovation and a Gil Hanse redesign of the club’s South Course currently in the works, the Sartori will take a two-year hiatus until 2017.  Traditionally played on the North Course (redesigned by Hanse in 2010), the tournament is expected to move to the new South when Invitational play resumes.

A Gentleman’s Game: Consisting of two-man teams from The Los Angeles CC and invited teams (with both players from the same club) from across the country, teams participate in a qualifying round to determine flights, with the low 16 qualifiers playing in the championship Sartori Flight.

Once a team is placed in a 16-team flight, it’s two-man four-ball format for four consecutive days.

“We try to invite true gentlemen.  And you have to be a competitor just to be in the tournament,” says Mark Pender, a tournament co-chairman for the past decade.  “It’s not an easy task; it’s a full week of golf with a practice round, a qualifying round and then four, four-ball matches.  So one could play six consecutive days.  You need to be not only in good shape, but a good competitor to win this tournament.”

Being in good condition extends to one’s manner.

“And we keep track of those who don’t conduct themselves in a gentlemanly manner,” adds Pender.  “Those who don’t, they may not get that invitation back the following year.”

The Voice: Club Member and luminary ABC sportscaster Keith Jackson serves as announcing starter on the first tee for the finals.

“That famous voice of his,” says Pender, “He’s very colorful, with stuff like, ‘From Texas!  The big right hander!'”

The Backdrop: Monikered in honor of the bridged walk from tee-to-green on the famed, par-3 10th, The Swinging Bridge Invitational at Bel-Air has been played annually in its current format since 1970.

The Event: Consisting of 188 players, two-man teams are formed with one Bel-Air member and one player from another USGA-recognized club. 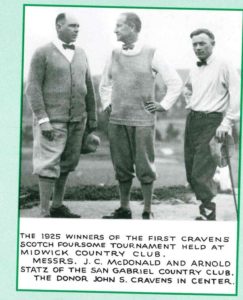 The three-day format begins with a partners’ better ball, followed by a “Chapman” style alternate shot on the second day and closes with a day three combined total of the two players.

Competitors from across the globe play the Swinging Bridge, held the week after the U.S. Open in June, with players swinging to win a perpetual trophy and a (more coveted) gold money clip in the form of a swinging bridge.

The Stories They Could Tell: SCGA Hall of Famer Eddie Merrins has been with Bel-Air since 1962, serving as the club’s golf professional emeritus since 2003 after four decades as Bel-Air’s head pro and director of golf.  The iconic “Little Pro” has more than a few Sartori yarns to spin.

“Tom Harmon was the chairman and he had the late, great Howard Cosell as the ‘roast master,'” Merrins recalls from the tourney’s opening night dinner in 1971.   “And there was a head table with John McKay, Pepper Rodgers, John Wooden, Willie Shoemaker, Jerry West, Al Davis and Jimmy McLarnin among others.  And Cosell stood behind each of them in a row and he roasted each one in his inimitable style the likes of which you never heard.  He gets down the list and the eleventh person he came to was John Wooden and he says, ‘Saint John … what else can you say?’ and then he moved on to the next guy.”

A “Rockfish” moment from 1998 is also among Merrins’ favorites.

“Jim (James) Garner was sizing up his putt on the eighth green and in so doing he was squatting, as players do behind a putt, and he inadvertently backed up and the eighth is flanked by a pond,” Merrins remembers.  “And he backed right into that pond – clothing and all.  He almost drowned in that water; he came out kicking and fuming.  He finished the eighth, got a fresh set of clothes to finish the back nine and on to greater things – he went on the win the tournament.”

The Backdrop: Annually held on Memorial Day weekend since 1950, the Macbeth Invitational is named in honor of Wilshire course designer and California golf legend Norman Macbeth (also a champion player in his native United Kingdom).

The Event: Aptly-reputed as one of the finest amateur fields in the country, the Macbeth generally consists of 25, two-man Wilshire teams and 75 invitational teams from around the country.

“It’s generally regarded as one of the strongest fields in amateur golf, because the average handicap is generally between four and five,” says Doug Dickey, a Wilshire member for 40 years and club historian since 2005. “And there are a lot of plus-ones, plus-twos and plus-threes that play.” 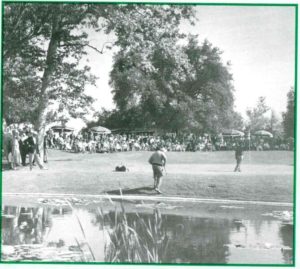 It’s a Race!: A Derby on the second day features the twelve finest golfers in the field, including Wilshire’s club champion, playing holes 10, 11, and 15-18; the four remaining contestants vie for Win, Place and Show on the home hole.

“The Saturday is a really special day,” says Dickey.  “After play, it culminates with the Derby, which starts at 5 p.m.  Generally, it features Scottish bag pipers who start it off and, typically, there’s a crowd anywhere from 300 to 750 people following the Derby and watching some of the finest players in Southern California.”

Let’s Table That: Crowds congregate at the scoring table not merely for the red numbers.

“It was specially built and it’s only used for the Macbeth,” Dickey says of the event’s unique scoring board.  “It’s a configuration that’s very special and just sets the whole ambience.  Everybody crowds around; it’s a custom made metalwork, a piece of art that people just gravitate toward.”