Like the former Army general and U.S. President it was named for, the Dwight D. Eisenhower course at Industry Hills is tough, but fair. Back in the early days of this 41-year-old layout, however, it was an absolute beast.

When the venerable California Open moved here in 1980, the 1979 champion, Jim Petralia, described Industry Hills as, “Extremely difficult. It will be an ordeal just finishing.”

The LPGA Tour held two events, the Olympia Gold Classics of 1981 and 1982 and stopped there, amid player complaints about length, hills, unputtable greens and dense rough. Current SCGA President and Industry Hills member Fred MacFarlane remembers his fright-filled first round on the Ike in 1984.

“I was excited to play there,” says MacFarlane, “but I didn’t realize how difficult it would be. I bought a dozen new balls and stuffed them in my bag. Standing on the 18th tee, I had one ball left. I said to myself, ‘If I lose this ball, I’m getting in my cart and driving straight to the parking lot.’ It was a brutal experience.”

MacFarlane is quick to add that while those early rounds and many more in the mid-1990s could be “frustrating” due to the lost ball factor, the challenge didn’t make the Eisenhower any less fun to play.

“Even as my game improved [he once posted a 3 handicap and has matched the par of 72 on the Ike], it was really fun to go around for 18 holes and try to come up with a respectable score.”

From the beginning, Industry Hills GC at Pacific Palms Resort was intended to thrive at the top-end of the “country club for a day” roster. Bill Bryant, a co-founder of the Junior Golf Association of Southern California and a longtime area course operator, was the brains behind Industry Hills, in partnership with the City of Industry. In the late 1970s, he directed SCGA Hall of Fame architect William P. Bell to craft a public course that wouldn’t take a back seat to any country club facility.

LOOKING BACK, I THINK THAT PROBABLY THE TOUGHEST COURSE I PLAYED WAS AT INDUSTRY HILLS, THE EISENHOWER COURSE. FROM THE TIPS IT’S 7,211 YARDS, AND THAT WAS PLENTY. -TIGER WOODS

Bell, who had created Torrey Pines, Sandpiper and Bermuda Dunes among other SoCal gems, complied to the letter, certainly in the resistance-to-scoring department. The result was two championship-worthy tracks, the Ike and the Babe, the latter named for legendary golfer-athlete, SCGA Hall of Famer Babe Didrikson Zaharias. Both were sprinkled with scorecard-wrecking holes, the Ike with eight lakes and 108 bunkers, the Babe shorter and narrower and nearly as demanding.

Still, there’s one prominent locally bred golfer who relished the old challenge. In 2007, Tiger Woods reminisced with the media about his competitive junior days 15 to 20 years prior — and about one course in particular.

“Growing up in Southern California and being able to play on so many courses as a junior was such a highlight for me, and a great learning experience,” said Woods. “Looking back, I think that probably the toughest course I played was at Industry Hills, the Eisenhower course. From the tips it’s 7,211 yards, and that was plenty.”

Tiger’s admiration notwithstanding, something had to be done to render the Ike a bit more playable for the average Joe. With the support of Majestic Realty Co., which has owned and operated the property since 2000, $60 million in changes arrived, most visibly in the form of a $20–$25 million golf renovation a little more than a decade ago. Cheers have replaced jeers. 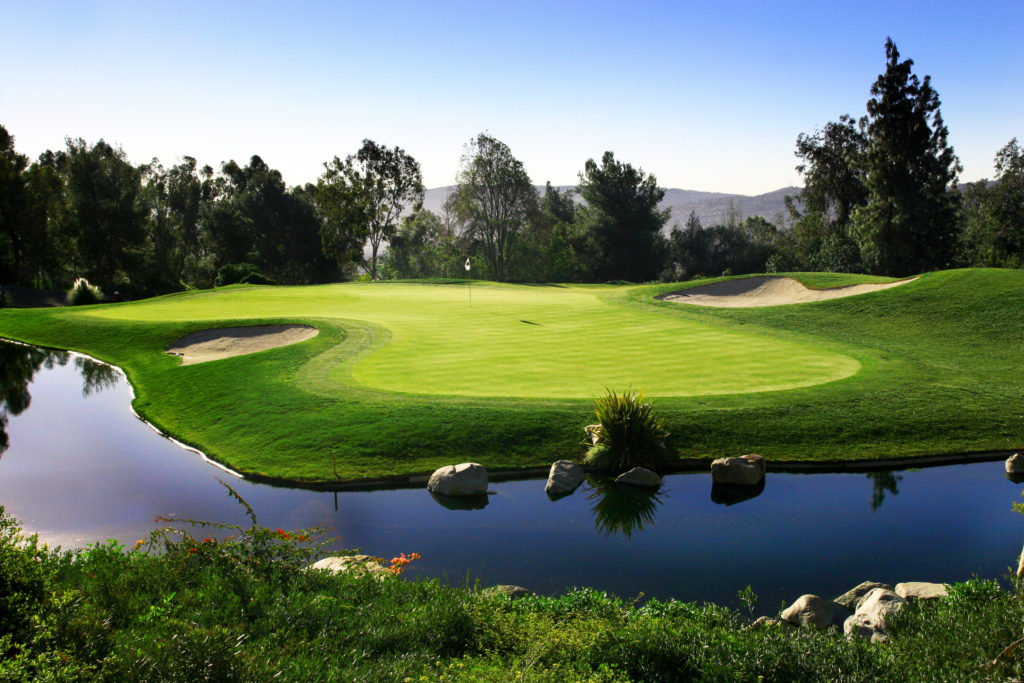 BALL-STRIKER’S PARADISE
In 2007, architect Casey O’Callaghan completed a thorough renovation that saw eight rebuilt greens, seven on the back nine. In addition, he re-contoured and relocated bunkers and eliminated the annoying tall rough.

“When they built this course in 1979, Billy Bell Jr. did a very good job with the design,” said Callaghan. “I really like the routing, the flow, the different lengths of holes. There’s great variety with the par 3s. They range from 135 to 240 yards and they require you to hit a different club. And you’ve got a terrific finish in 15 through 18. At the beginning, however, they spread a hydroseed mix outside the manicured grass areas. It created a thick, attractive native grass, but for the paying public, it was tough. You’d hit your ball two feet outside the manicured area and you’d lose your ball. Part of what we did was to clear out the underbrush and make it more playable.”

Golf Digest honored the Eisenhower as one of the “Top 5 Renovations of 2007.” In 2010, the National Golf Course Owners Association named Industry Hills GC its best public golf operation of the year. And in 2011, the LPGA returned — with smiles, not frowns.
For gallery flow and player convenience, the LPGA utilized a par-73 composite course when they contested the 2011 Kia Classic here. In the end, rising star Sandra Gal took the title, at 16-under-par 276.

Director of Golf, Dave Youpa, who started at Industry Hills in 1991, echoes Gal’s sentiments. “There’s more room off the tee than there used to be,” he says, “but if you want to score, you’ve got to hit good tee shots. From there, it’s all about finding the proper quadrant on the green. It’s rare to find a flat, straight putt on these big undulating greens.”
Youpa likens the look of the layouts to something in the Rockies. “There’s almost a Colorado feel to it here,” he says. “There’s elevation change, no homes, huge pine trees and mountains staring at you.”

Hole 10 is Youpa’s pick for the standout hole. The risk/reward par 5 of 567 yards calls for a tee shot slotted to a fairway crest between flanking bunkers. If you hit in the 275–280 range, you have a legitimate chance at reaching, because it’s downhill from there. However, the shallow green is guarded front- right by a lake and two bunkers in back, and the putting surface itself is three-tiered, with a left-to-right slope.

The second hole earns Youpa’s vote as most memorable. From a tee elevated several hundred feet, you drink in a view of the Mt. Baldy peak in the San Gabriel Mountains and the San Gabriel Valley below. As for the task at hand, the 386-yard par 4 could be drivable for a select few, but water fronting the green will discourage most.

Another attention-getter is the par-3 9th. Measuring just 137 yards, this tiny terror is fortified by four bunkers and by a green that snakes front-right to back-left for 57 paces. Even a front hole location can be vexing because of the severe slopes.

The toughest stretch on the Ike is Nos. 4 through 7. Three of the holes are rugged par 4s running from 465 to 496 yards. Sandwiched between them is the 237-yard, par-3 5th.
MacFarlane touts No. 5 as perhaps the toughest, especially when the hole is cut on the back portion of the green. “You can’t hit a draw here because trees overhang to the right,” he says, “but miss it left and you’re down in a deep swale.”

And then there’s No. 18. At 652 yards, par 5, uphill to a three-tier green, it’s a monster in any era. Trouble arrives with the tee shot. Fade it into the deep fairway bunker to the right and you’ll need a 9-iron or wedge to escape, likely thwarting any chance of reaching the green in 3. Pull your drive and a lake awaits. The green is reachable in two, but only by the strong and the brave — or perhaps the foolhardy. 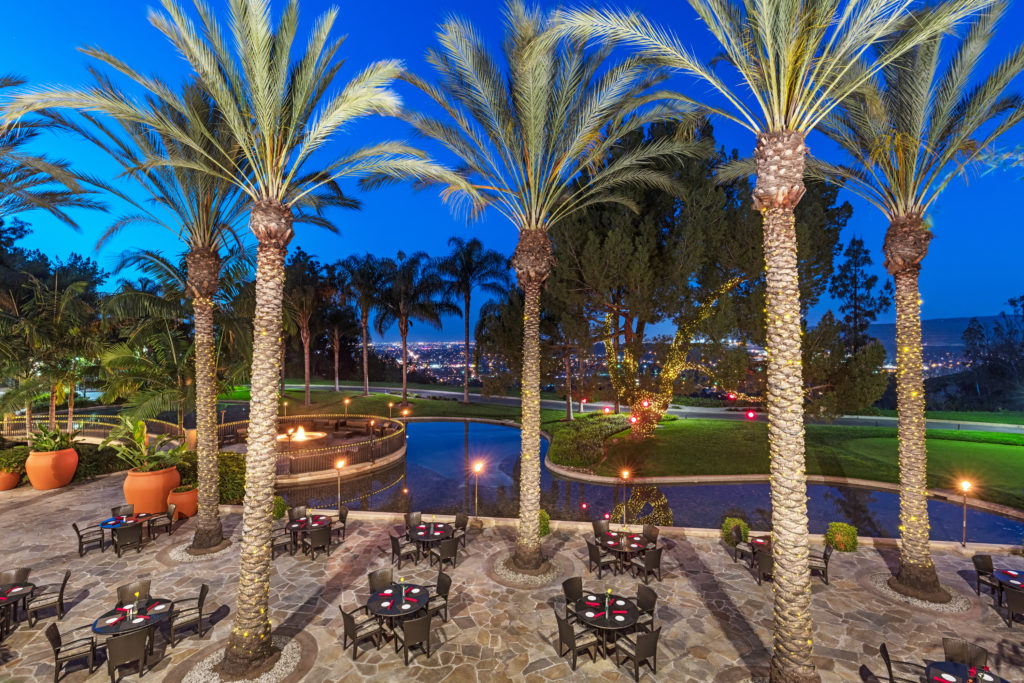 Both courses at Industry Hills saw action on the only other occasion that it played host to the SCGA Am, in 1991, with three rounds on the Ike and one on the Babe. Prominent mid-amateur John Pate, brother of six-time PGA Tour winner Steve, grabbed the title at age 39, with a 289 total. He birdied the final two holes from short range to clinch the crown.
Industry Hills was once known for several unique aspects apart from its shot values. In 2010, Golf Digest lauded Industry Hills as one of the most influential courses of the 1970s, stating that it “was one of the earliest and most prominent golf projects constructed atop a city dump, what government officials politely call a sanitary landfill. Its success encouraged other communities to use golf as a reclamation tool.”

Perhaps most memorable was the mode of transport — a Swiss trolley, called a funicular — that conveyed golfers and carts from the 9th or 18th greens up the steep hill to the clubhouse until 2000.

Today, Industry Hills relies on the basics — perfectly done — such as the Snack Shack’s massive egg burrito to start your day or the huge, juicy cheeseburger served up for lunchtime at Red’s.

Nevertheless, the signature dish at Industry Hills is its two great golf courses. One of them, the Eisenhower, will host the SGCA Am. The guess here is that the tournament winner will respond with the simple slogan that was linked to General Eisenhower’s 1952 Presidential campaign: “I like Ike.”