As the rustic wooden gates swing open and you head to the first tee at Shady Canyon GC in Irvine, it soon becomes difficult to decide if you’re playing golf or taking a nature hike.

To paraphrase Mark Twain, widely credited with the tongue-in-cheek synopsis of golf as a “good walk spoiled,” an 18-hole round at Shady Canyon is a good, unspoiled walk through nature.

Make that a great walk, because Shady Canyon is as aesthetically spectacular as its natural surroundings. And every round at the private club is like communing with nature as you navigate your way around a Tom Fazio masterpiece that just celebrated its 20th anniversary in December.

No matter where your golf ball settles, it’s difficult to agonize about it as you traverse fairways framed by stately oaks and sycamores and colorful cacti, walk past outcroppings of boulders and native chaparral, or follow the contours of a course with meandering creeks, distinctive elevation changes and stunning views of the rolling hills and canyons.

As if that isn’t enough nature, the golf course and enclaves of blufftop estates in Shady Canyon’s exclusive gated community are surrounded by 16,000 acres of protected coastal open space, including a natural habitat teeming with wildlife that has been certified as an Audubon Cooperative Sanctuary.

Shady Canyon GC is the ultimate manifestation of Fazio’s design premise that golf courses “should reflect the natural beauty of their environments,” and that they should give the impression that nothing was done to disrupt that intrinsic beauty.

As Fazio stated after completing Shady Canyon’s 7,012-yard, par-71 championship-caliber layout, “Our goal was to create a golf course where people will say, ‘This is as good a golf course as I have ever seen in my life, played anywhere, anyplace.’”

That, of course, is open to debate among those who have teed it up at Shady Canyon over the years, but as a golf setting it is unquestionably as peaceful as anywhere, any place, in Orange County — or anywhere else in Southern California for that matter. The serenity is palpable.

“You think of the hustle and bustle of Orange County, the roads and cars and number of people, the number of buildings and homes,” said Brian Gunson, Shady Canyon’s director of golf since the club opened in 2001. “But when you get to Shady, it’s an oasis of peace and quiet.”

While out on the course, there is no way to know that the 405 Freeway and 73 Toll Road are only minutes away. It’s also difficult to know how many other golfers are on the course because of the distance between most holes. It feels as if your group has the course to itself — no one in front, no one behind — even if the tee sheet is full.

“Even though you’re in the center of millions of people in Orange County, you feel like you’re in one of those Sand Hills destinations, with nothing else around — just you and nature,” said Matt Kelly, current club president and an original Shady Canyon member, comparing the idyllic setting in Irvine to world-renowned Sand Hills GC in a remote area of Nebraska. “Never in a million years would you know the freeways are around. The level of peacefulness is overwhelming.” 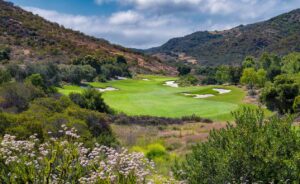 In Golf Digest’s biennial 2021-22 edition of “The Best Golf Courses in California,” Shady Canyon is ranked No. 32 on a prestigious list topped by storied Southern California private clubs such as The LACC (North Course), Riviera CC, The Valley Club of Montecito and Bel-Air CC. Shady Canyon is the only Orange County course among Golf Digest’s top 40 in the state. The setting is picturesque, the calming vibe is comforting, and the world-class amenities (a lavish, 43,000-square-foot clubhouse with several dining areas and a 6,700-square-foot wellness center and spa) are befitting an upscale private club.

The seclusion and privacy that came with the minimum half-acre lots offered to the first 400 custom homebuilders who erected multimillion-dollar mansions in the community also attracted a steady stream of media celebrities, business leaders in the tech and R&D industries, and former and current professional athletes.

The golf course, however, re-mains the biggest draw inside the gated community. It is the imag-inative Fazio design, spread over 300 acres of jaw-dropping natural terrain, that commands a six-figure initiation fee reportedly among the highest in Southern California.

How memorable is the golf course? Put it this way: It is difficult to choose a signature hole.

“I’m going to stick to what Tom Fazio says,” Gunson said. “And he says Shady doesn’t have a signature hole. The way he looks at it, they’re all signature holes. It’s all subjective, like a painting. You could put five paintings on the wall, and five different people might choose a different favorite.”

Or as Fazio described Shady Canyon when the course opened in January 2002: “They have lots of ‘wow’ holes. You stand on every tee and you’ll say, ‘Wow, look at this; this is the best hole.’ But when you go to the next tee, you’ll say, ‘Oh, no, no, I’ll pick this one.’”

Most golfers familiar with Shady Canyon agree that there are at least 11 holes with that “wow” factor: the starting and finishing holes on each nine, all five par-3s, plus the ultra-challenging par-4 6th and diabolical par-5 11th.

Though the fairway driving areas are generous on most holes, the difficulty of the course (74.7 rating, 144 slope from the back tees) is ramped up by numerous forced carries and large, fast, undulating, bent-grass greens that make every two-putt par an accomplishment.

“The greens are definitely the trademark of Shady Canyon,” club president Kelly said, noting that director of agronomy John Nachreiner works hard to keep the Poa annua out of the putting surfaces. “They are some of the best greens in Southern California.”

Over the years, the course has replaced all of the greens and bunkers and regrassed the original fairways with a Bermuda hybrid
(Princess 77), which requires less water and eliminates the need to overseed.

Now, the course is in pristine condition 12 months a year. Collectively, the five par-3s are as formidable as they are visually spectacular.

“What makes the course special is each hole is its own,” said Gunson, who worked 22 years at Turnberry Resort in Scotland before being lured to Shady Canyon by The Irvine Company. “Fazio was given 300 acres to build the course, and he used them all. When you play the course, you have every shot: uphill, downhill, right-to-left, left-to-right, short, long … you go through every club in your bag.”

The course record at Shady Canyon is 59, by PGA Tour player Brendan Steele, an honorary club member, during a 2018 round with World Golf Hall of Famer Phil Mickelson in the group. PGA Tour star Patrick Cantlay, an Orange County native, also is an honorary member.

When the rustic wooden gates open again on your way out of Shady Canyon, Fazio has one wish. “I want people to leave with, ‘This is as good as any golf experience I’ve ever had,’” he once said.

Naturally, as in a good walk unspoiled.