Spring 2017Travel
Home›Issues›Spring 2017›Discover The Old Pueblo: Golf In Tucson Is As Good As It Gets In Arizona

Discover The Old Pueblo: Golf In Tucson Is As Good As It Gets In Arizona

When it comes to great golf in Arizona, Scottsdale gets the lion’s share of attention, and deservedly so. But what if there was a more laidback alternative in the Grand Canyon State, a “lamb” of a destination that delivers an equally compelling desert golf experience?

As it turns out, Tucson fits that bill to a tee. In fact, what locals call the “Old Pueblo” has several dozen golfing opportunities for the public that are generally more reasonably priced than their neighbor to the north, include incredible conditioning and views that are as good or better and offer all the amenities of your traditional golf trip, whether it’s with your partner or buddies.

Oh, yes, and did we mention the sun shines nonstop in Tucson? Not to mention the “best 23 miles” of what are considered the top Mexican cantinas this side of the border!

BEST OF THE BEST

Paul Nolen, who came to Tucson on a golf scholarship to the University of Arizona back in the early 1980s and never left, knows why savvy vacationers seeking terrific golf options select Tucson. And, hey, if you believe in local knowledge, Nolen, a former Pac-10 champion at the UofA who also won the Arizona Open, is loaded with it.

“One of the reasons I love Tucson is because it has a small-town flavor, even though we have a large university campus that’s attached to the city, as well as approximately 1 million people living in the greater metropolitan area,” explains Nolen, the general manager at Sewailo GC, a relatively new golf entry in the Tucson market that was built by architect Notah Begay and serves as the home of the Arizona Wildcats. “Plus, we’ve got some great golf that I’d put up against anything you will find in Arizona.”

Nolen would know, as besides Sewailo he worked for 18 years at The Gallery GC, considered by many to be the finest private club in southern Arizona. Asked if he had to pick out a foursome of Tucson tracts he would recommend to visitors, Nolen doesn’t hesitate.

“Well, obviously, I’d start right here at Sewailo,” he says, pointing out the fact that the Troon-managed layout snakes its way serenely through native desert amid 11 acres of water (11 holes bring the wet stuff into play) while giving golfers a wide variety of holes and mountain views that are, well, Scottsdale-like. 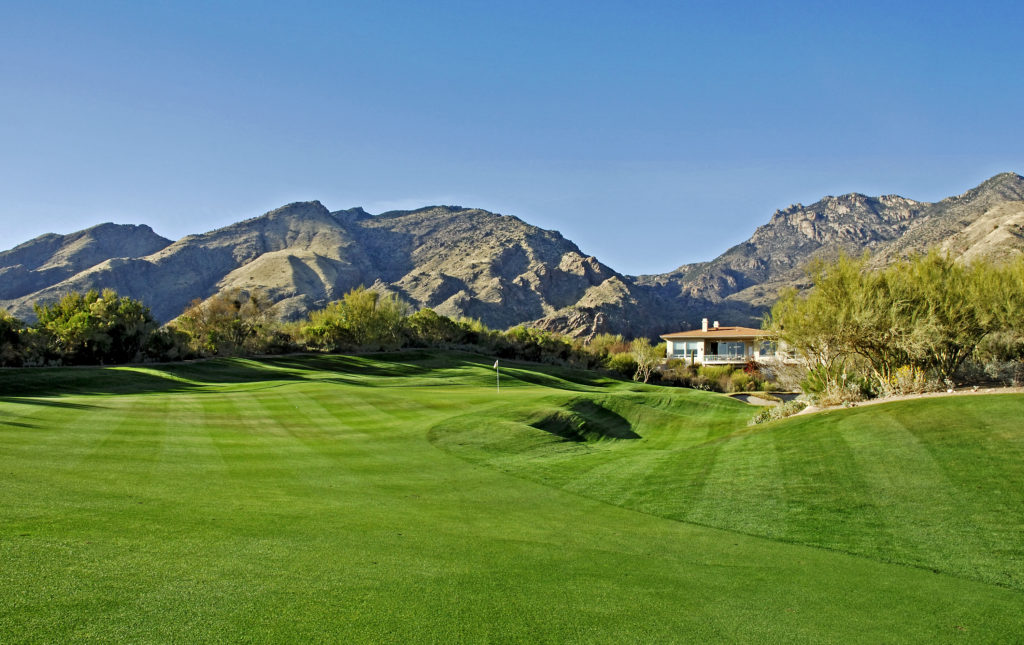 “I’d also add to that must-play list Ventana Canyon, because it’s some of (architect Tom) Fazio’s best work and the views are spectacular; the Golf Club at Vistoso, a great Weiskopf design that is just plain fun to play; and Tucson National, simply because not everyone is a fan of desert golf and you’ve got a lot of grass at the National — along with a lot of history!”

Nolen is right down the middle of the fairway with his assessment of the best golf in the Old Pueblo. Tucson National was home of the Tucson Open for many years, a tournament that was won four times by Johnny Miller and led to Johnny’s nickname – “The Desert Fox.”

Vistoso also is historical in nature, given that Weiskopf said he used traditional concepts in building the lush layout that he learned from “the masters” — A.W. Tillinghast, Alister Mackenzie and Donald Ross.

And when it comes to courses you never will forget, Ventana Canyon with its Canyon and Mountain layouts are certainly in that must-play vein, and boast the most expensive golf hole in Arizona, the par-3 third hole on the Mountain Course, a 107-yard shot over a deep canyon that Fazio called “one of the shortest and most expensive holes I’ve ever designed.”

He estimated that construction costs were nearly $500,000, and when the five miles of Biotherm tubing were installed under the putting surface to keep it always at a comfortable 72 degrees (a defense against heat and frost), the costs jumped to more than $1 million.

“I’ve done hundreds of golf courses, and Ventana Canyon is still among my top 10,” Fazio said. “It’s alive and growing, and offers a tremendous variety of desert vegetation and massive boulder outcroppings . . . and that’s what makes both courses such a great environment for golf.”

Tucson does deliver like no other when it comes to desert flora and fauna. For instance, did you know that the city borders the largest concentration of saguaro cacti in the world? Or that Sewailo alone has more than 40,000 native plants on its 18 holes? And, oh my, what a place to encounter the likes of deer, coyote, red-tailed hawk, bobcat and roadrunners, as well as the occasional rattlesnake.

The Mexican restaurants of Tucson are also amazing, and who doesn’t like a taco and a margarita after a long day on the links? Those famed “best 23 miles of Mexican food” include El Charro Café – The Original, the oldest and most highly rated in the city, where the chimichanga was born; Mi Nidito, where former president Bill Clinton coined the “Clinton Combo” during numerous visits; El Guero Canelo, known for its world-famous Sonoran hot dogs; and Poco & Moms, a specialty breakfast café that includes red and green chilies in almost every entree.

Other great distractions for those who visit Tucson include short road trips (about an hour) to the artisan community of Tubac, where much of the golf flick “Tin Cup” was filmed at Tubac Golf Resort, and to Tombstone, where a notorious foursome of gunfighters — Wyatt, Morgan and Virgil Earp, along with Doc Holiday — went down at the OK Corral. Believe it or not, Tombstone has four area golf courses, including the state’s longest-running links, Turquoise Valley in nearby Bisbee (circa 1908).

Add all those Tucson golf-related facts up and, well, no wonder the local CVB) refers to the city as “a hole-in-one.”