The Merry Men (& Women) of Sherwood CC: A Recent Nicklaus Renovation Elevates the Club and Course to New Heights

Jack Nicklaus joked about keeping an eye out for Robin Hood and Little John during his initial visits to the site that would eventually become home to Sherwood Country Club. 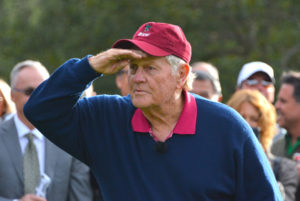 Before Nicklaus created one of Southern California’s most iconic golf courses, the valley in which Sherwood sits and the surrounding mountains played host to many Hollywood productions.

The hillside directly behind the course provided the backdrop for the famous opening helicopter scene from the television series M*A*S*H. Before the fairways were fairways, the rugged landscape served as home for Bo and Luke Duke and the rest of the cast of the Dukes of Hazard.

But it was two legendary Hollywood movies featuring Robin Hood and his band of Merry Men that helped shape the identity of the club. It started with the 1922 version of Robin Hood that starred Douglas Fairbanks Sr. and Enid Bennett. In 1938, Errol Flynn and Olivia de Havilland stepped into the roles of Robin Hood and Maid Marian in The Adventures of Robin Hood.

A poster from the 1938 film hangs in the Sherwood clubhouse, and the Robin Hood cabin — where Fairbanks reportedly lived during the 1922 filming — still stands.

In his desire to make his new club and golf course the place to be, Murdock turned to Nicklaus, who was thrilled with the opportunity. 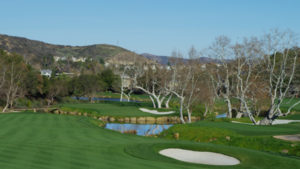 “It’s a gorgeous piece of property,” Nicklaus said. “It sits in this valley, with very little influence from the outside. It’s a beautiful valley and this golf course pretty much routed itself through the terrain. The whole property was covered with gorgeous trees and gorgeous views. We moved 1,200 oak trees and only lost one. It’s always been pretty special in my heart.”

Nicklaus helped officially open the course in 1989, hitting a ceremonial tee shot. Lane Weitzman was one of those on hand for the opening. Weitzman had known Murdock since the late 1970s and was one of about 20 people whom Murdock convinced to become charter members of his new club.

When he heard Murdock talk about his vision, Weitzman — who used to ride his horse through the property, admiring the area’s beauty long before it became one of golf’s great courses — decided he had to be part of it.

“We supported him and he did it,” Weitzman said. “He turned it into a magnificent community. As far as the golf course is concerned, I’ve played a lot of great courses in my life, but my favorite is Sherwood. I never get tired of it.”

Sherwood is just greater than 7,000 yards, standard length for courses back in 1989, but short by today’s standards.

“Even at that length, I felt and still feel it’s a test for all players,” Nicklaus said. “I think there’s enough in the golf course that you have to use your head, place the ball in the right spots.”

Murdock put his new course to the test in its first year of operation by convincing golf superstar Greg Norman to hold his new event, The Shark Shootout, at Sherwood. The annual event was held at the facility from 1989 through 1999 and drew most of golf’s biggest stars. 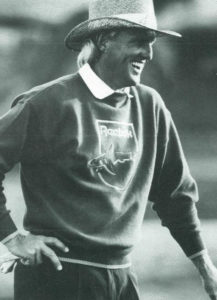 Among the players who claimed a Shark Shootout title during its 11-year run at Sherwood were Norman, Fred Couples, Raymond Floyd, Davis Love III, Tom Kite, Curtis Strange and Mark O’Meara. Couples won three Shark Shootout titles at Sherwood, including a 1990 teaming with Floyd that resulted in a winning score of 182, still the all-time low record for the tournament.

“We had a great run at Sherwood and it’s been a terrific effort put in by the community sponsors and spectators,” Norman told the Ventura County Star. We love it here. It’s sad but (moving the tournament to Florida) is just something we have to do.”

In August 1999, Sherwood hosted “The Showdown at Sherwood,” a televised match play exhibition between Tiger Woods and Duval which Tiger won 2 and 1.

One of the pivotal holes of the match came at No. 16, a par-4 that members affectionately call “The Rock Hole.” The moniker comes from the large boulder that sits in the middle of the fairway.

Rumor had it that the rock fell off a truck while being moved before Nicklaus came for a site inspection. Nicklaus supposedly saw it in the fairway and decided it added character to the hole.

“It’s a pretty big rock that we just decided not to move,” Nicklaus said. “If you look at the fairway it’s a pretty wide area. The rock divided it and sits in a pretty good spot where it really should not come into play.”

Unfortunately for Duval, it did, as his tee shot hit the rock and fell under a bush at its base. As a result, he lost the hole and one hole later, the match.

The match ended on the 17th green that was illuminated by several light poles that were brought in specifically for the event to finish in the dark. It created a circus-like atmosphere seldom seen in golf.

“I didn’t think the crowds would be that boisterous, but they were,” Woods said that night. “It was a pretty exciting atmosphere.”

A TIGER REPLACES A SHARK

Norman’s decision to move his event from the club opened the door for Woods and the Tiger Woods Foundation to move Woods World Challenge to the club in 2000, where it was held through 2013. The event was comprised of a limited field of the world’s top-ranked players. Of the 14 winners during the tournament’s run at Sherwood, only one, Luke Donald, doesn’t have at least one major title on his resume. 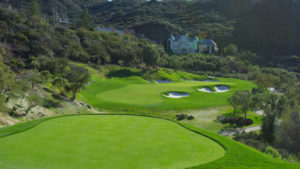 Woods won the event five times, and had a chance to win two other times before losing in dramatic fashion to both Graeme McDowell and Zack Johnson.

Eventually, like Norman, Woods moved the event to Florida. During the week of the final World Challenge at Sherwood, players including McDowell and Johnson talked about how much they loved coming to Sherwood to play. Even Woods got emotional when talking about leaving such a great venue.

Former Foundation head Greg McLaughlin echoed Woods thoughts: “The people at Sherwood have been great hosts to our event. It’s been a great partnership with them and we’re grateful for all they have done for the tournament and the foundation.”

Now president of the Champions Tour, McLaughlin is bringing a Champions Tour event to Sherwood in October 2016 as part of the season ending Schwab Cup.

When the players arrive, they will find a renovated Sherwood. In 2015, the club’s Board of Directors voted for a major overhaul to upgrade the course’s infrastructure, including the irrigation system, drainage and soil conditions. The renovation project gave Nicklaus a chance to upgrade his original design.

In early March, Nicklaus stood on the tee box as he had 27 years earlier and re-opened the course with another ceremonial tee shot.

Echoing Nicklaus’ comments, actor Craig T. Nelson said, “I was here when you opened the course the first time, and I have to say I think the new course is even better.”

Nowadays, it’s Nelson and the lucky members who comprise the band of Merry Men (and Women) of Sherwood Country Club.