PAWS AND PARS ON THE CENTRAL COAST 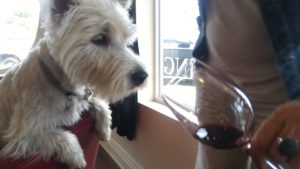 Ladies, gentlemen … and dogs: Welcome to the Rock. While both man and hound hold a separate, though equal, adoration for chasing around a ball, the shared pursuit rarely finds much coalescence, especially on the road. It would seem that the question, ’What to do with my dog while I go on a golf trip?’ is as aged as the gentleman’s game itself.

The answer to that query is found in Morro Bay, Calif.

With its 23-million-year-old, 576-foot-tall Morro Rock standing sentry over the eponymous seaside city along Highway 1, a mere 200-mile drive up the coast from L.A. proves a casual, homey welcome for bipeds and quadrupeds alike. 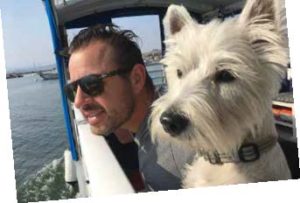 Upon turning a year old, we decided that our dog Archie’s graduation from puppydom was deserving of an escape from the Coachella Valley’s summer sizzle.

Considering that domestic pet owners spent an estimated $72 billion on their animals in 2018, the choice to take a dog on a golf trip didn’t seem all that aberrant. And, sure, while more than a few travel adjustments need be made for such a scenario, in pet-friendly Morro Bay, the concessions are mitigated.

Strolling along the main strip of bay-adjacent Embarcadero Avenue, pups are seemingly on par with people. Like those holding the respective leashes, the main drag’s scent of salted air, sugary confections and the day’s fresh catch from the active commercial fishing fleets seem to grab the senses of all snouts.

On and off the water, from boat cruises and kayaks to docks and dining, few locales are off-limits to man’s best bud.

“People certainly love their dogs here,” said James Springfield of the Chateau Margene tasting room on Morro’s main strip. Pouring a healthy offering of the stellar 2013 Reserve Cab, Springfield lauds Morro Bay for sporting all the draws of Cali’s coastal lifestyle, but without any of the big city hassle.

“Here, you’ve got the best of all worlds, with our beaches, water activities and then all the dining and great wines from around the region,” he said. “Morro Bay is starting to grow up; lots of change in the works, even though things move nice and slow around here.”

A casual pace indeed, and one paired with some great platings. 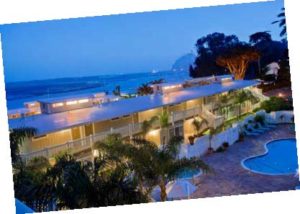 A wind-down of a day strolling the main drag finds perfect purchase for man and beast at the Inn at Morro Bay, coastally perched within the 4,000-acre Morro Bay State Park. As the sun eventually melts past the Rock from the vantage of the Inn’s cottage lodgings (highly suggested for a special occasion), the day’s olfactory sensations give way to an auditory concert played by herons, egrets and shorebirds, as the bay’s moored boats tuck into their evening slips.

Directly across the street from the Inn, Morro Bay GC nears its centennial celebration, and plays as the most popular of San Luis Obispo’s trio of value-driven county courses. 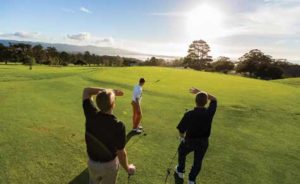 As a dog sitter takes Archie for the morning (a service readily available in the area), leashes are traded for clubs. Known as the “Poor Man’s Pebble Beach” (a title shared with several other courses in California), Morro Bay GC’s 6,360 yards make for a getable round across an idyllic setting.

“It’s a relaxing and fun environment,” said Michael Samaniego, head golf professional. “From practically every hole on the course you have a view or a glimpse of the ocean, the sand dunes, Morro Rock and just the overall beauty of the estuary and the Back Bay.”

A dearth of distance is measured with a course defense of sticky fairways and deceptive putting surfaces.

“The course is unique,” Samaniego said. Everything is pretty much in front of you. We have just three bunkers and they really don’t play into the course all that much.”

Located within the State Park, a woefully errant strike on Morro’s par-5 14th may find a buoyant campground. “It’s very popular, and we have lots of golfers who camp, so we offer them a discounted rate,” Samaniego said. “We have guys who sleep in their tents or their RVs, roll out of bed, and then just stroll up here to play.”

At nearby Dairy Creek GC in San Luis Obispo, campers from El Chorro Regional Park also fill up the tee sheet. “We’ll get a lot of people who camp and play golf,” said Charles Buckley, golf assistant at Dairy Creek. “Camping is everywhere out here.”

“At first, rounds went down a bit, but now it’s picking up again, and we’re seeing a demographic that likes to play nine,” Buckley said. “And you can’t beat the affordability, with just $15 to walk out here.”

And, true to the region’s affinity for animals, the property enjoys the unique staffing of on-site sheep. “We have a guy that grazes them out here, just to keep the weeds down; he moves the sheep around every week or so,” Buckley added.

In neighboring Atascadero (which has a dog park adjacent), rugged Chalk Mountain proves the most earnest test of the county’s three facilities.

“Our course is the most challenging in the county,” said Jack Bishop, pro shop employee at Chalk Mountain.

Deer abound across the Robert Muir Graves design, where a reappearing creek winds through taut landing areas, and a burly latter nine evens the scoring chances.

“There’s more trouble here than the other courses,” added Bishop, “and with our smaller landing areas, it’s easy to lose your ball in the rough. If you can keep it in the fairway, you’ll do really well.”

While I was enjoying three rounds in successive days, Archie had his own separate Central Coast adventure. With his brown Lab, Gracie, in tow, the dog sitter had taken the pair on a fresh journey each day, introducing our little man to the area’s bounty of hiking trails and dog parks.

Following the Chalk Mountain round, we reconvene for a parting lunch at Street Side Ale House in downtown Atascadero. It’s a bit warmer inland, and Archie and Gracie share the shade beneath our table.

I finish my Dead Oak Pilsner and bacon-crusted burger (passing a few scraps beneath the table), and we perform our handshakes as the dogs, in their innocence, probably don’t realize they’ll never see one another again.

The car is readied for the return to Palm Springs, and we begin our trek south. Archie likes to be in the action, and he wiggles his way to the center console. One hand on the wheel, I scratch his ears as he watches the mile markers click by.

And I swear, for a moment, I see him tilt his little head upward, as if he were fondly recalling the adventure that was now in the rearview.