Having already completed a morning walk playing 18 holes at Hunter Ranch GC, I’m glad it’s a short drive to my next starting time, at Grey Wolf Cellars. It may only be noon, but with Grey Wolf, Barton Family Wines and Krobar Distillery all in the same location — separated only by one’s capacity to walk a straight line between tasting rooms at the 60-year old renovated farmhouse — it’s a stop where I can sample several of the expanding array of libations found in Paso Robles. If necessary, a brief respite for some comfort food at the on-site Barton’s Kitchen Window is also an option. Could there be any more gratifying post-round adventure in Central California wine country? Hey, it’s happy hour somewhere.

It used to be that Paso Robles, located halfway between Los Angeles and San Francisco on Highway 101, consisted of one golf course, maybe a half-dozen wineries and some low-budget motels and chain restaurants. It was basically a drive-by cow town offering zero incentive for a pit stop unless for fuel.

All that has changed. Nowadays—while the hypnotic I-5 freeway cutting straight through the heart of the doglegged-shaped state is the quicker route — Paso Robles has upped its game on all fronts. The charm of the laid-back ranch lifestyle still exists, but a thriving wine culture, world-class craft breweries, contemporary epicurean adventures, trendy shops and upscale accommodations more than justify a bit longer drive closer to the Pacific Coast … with far more Instagram moments. 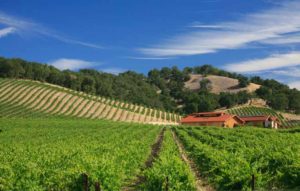 “Since the ’90s, when Paso was known more for its rustic style with less polish, this area has evolved like any other burgeoning wine-growing region with people looking for affordable land to set up shop,” says former Justin Vineyards winemaker Steve Glossner, who, along with his wife, Lola, started PasoPort 10 years ago to focus on port-style wines, and who recently expanded into a new wine and spirits venture with Pendray’s Distillery.

“Paso started attracting a fresh group of winemakers who were better educated, well traveled and wanting to push the envelope,” Glossner says. “That’s great for consumers because it’s raised the quality level and boosted tourism. Now making good wine is no longer the reason for success but rather a mandatory requirement coupled with what else is being offered to lure people to your winery.”

There is no official stat on the number of wineries in Paso Robles, but word around the vines places the sum about 200, from funky and colorful to reserved and relaxing, with wines ranging from Spanish to Italian, Bordeaux to Rhône, Pinot Noir to Chardonnay. Many still feature the area’s heritage varietal, Zinfandel. Regardless of the exact tally, when you’re counting the 10 local distilleries and seven breweries, there are plenty of fermented outposts to reinforce that symbiotic relationship between golfers and the 19th hole.

REGARDLESS OF THE EXACT TALLY, WHEN YOUR’E COUNTING THE 10 LOCAL DISTILLERIES AND SEVEN BREWERIES, THERE ARE PLENTY OF FERMENTED OUTPOSTS TO REINFORCE THAT SYMBIOTIC RELATIONSHIP BETWEEN GOLFERS AND THE 19TH HOLE.

For touring golf-oenophiles, the east-west Highway 46 links a steady trail of wineries and golf courses. Across the road from Eberle Winery, one of the Paso wine pioneers, is the area’s premier golf challenge, Hunter Ranch, which has been testing golfers since 1994 on its two distinct nines weaving through 6,741 yards of century-old oak-studded rolling terrain devoid of any homes. 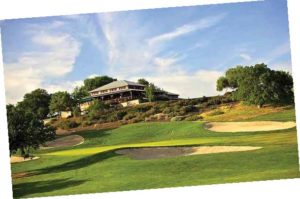 “Hunter Ranch is a wonderful layout with the best-conditioned greens in the area,” says Marko Hardin, the general manager at Hunter Ranch. “It’s a fabulous walking course surrounded by vineyards with lots of elevation changes that result in plenty of uphill and downhill shots and requires most every club in the bag.”

Within minutes of Hunter Ranch is a trio of courses, including the 18-hole Links Course at Paso Robles, a six-hole “player development” test at River Oaks GC and the town’s original layout at Paso Robles GC, which opened in 1961 as a country club before switching to public play in the 1990s.

Not a big fan of “ball golf?” Castoro Cellars on Hwy 46 West is home base for an alternative 18-hole experience zigzagging around its vineyards. Several years ago, Max Udsen, an avid disc golfer, convinced his family and the founders of the 30-year- old winery to establish Whale Rock Disc Golf Course as a means to attract wine- tasting visitors outside to where the grapes are grown and where whale bones can still be found in soil that was under water millions of years ago, though it’s 25 to 30 miles from the Pacific Ocean.

In present-day El Paso de Robles (“The Pass of the Oaks”), whether you’re hitting a ball or throwing a disc, tasting wine, beer or whiskey, or even visiting nearby Hearst Castle, it would be ambitious to cram so many activities into a single-day visit. To facilitate that quandary, the evolving caliber of accommodations is proving to be a key factor energizing the metamorphosis of Paso Robles. 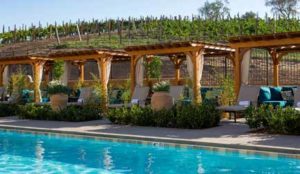 At Allegretto, accommodations are surrounded by vineyards, olive orchards and fruit trees, promoting a relaxed mind-set. “Doug Ayres [Allegretto’s proprietor] is an avid traveler and wanted guests to feel the experience of music through the name and also from the sound and design around the beautiful pieces of art he’s collected from Italy, Asia and South America that are situated throughout the resort,” says Rich Verunni, general manager.

“There are maybe a dozen chefs in town and we all know each other,” Picard says. “We all just want to make the food better so we can have more fun.”