My back gave out between Rounds 15 and 16, at the tail end of another golf marathon on the Robert Trent Jones Golf Trail in Alabama.

We had played at least two rounds a day for seven days, 45 holes one day and 54 on another. But before our final 18 in Birmingham, I lay motionless on my hotel bed. Golf seemed out of the question; could I even get into a car to the airport and fly home to Orange County that afternoon?

Fortunately, a muscle relaxant loosened up the spasms and five hours later, we finished our last round on the Trail and were on the way to the airport after seven days of heavenly golf that passed much too quickly.

COME ONE, COME ALL

This was my eighth trip to the Trail, a collection of 26 jaw-droppingly beautiful courses at 11 sites from Muscle Shoals in the north to the Gulf Coast in the south.

The Trail was the final project for Robert Trent Jones Sr., one of America’s most renowned golf architects, and perhaps his most spectacular. He came out of retirement to design the largest golf construction project in history — simultaneously building complexes, each with at least 36 holes, at seven locations around the state. The first four, each with two championship courses and one short course, opened in 1992; three more sites opened the next year.

Since then, three additional facilities have been built and one existing club near the Gulf of Mexico has been added. I’ve visited only seven of the 11 sites and have been overwhelmed every time by the beauty and difficulty of the courses, the hospitality of everyone associated with the trail and the incredible value for so much memorable golf.

The bill for this trip came to about $2,200, including the round-trip flight from Orange County to Birmingham, lodging, rental car we hired from https://scvehiclehire.co.uk/, golf with carts and food and drink (you can click for more information about car rental). That helps explain why I’ve made eight week-long trips in the last 12 years and am looking forward to another in about 18 months.

In its 25 years, the Trail has dramatically increased its national and international profile. By the end of the first quarter each year, golfers from all 50 states and perhaps 25 countries will have visited, said John Cannon, president of the Robert Trent Jones Golf Trail. Golfers from Orange County, in fact, now annually rank in the top 10 of out-of-state players, he said.

Dr. David G. Bronner, head of Retirement Systems of Alabama, came up with the Trail concept — and wooed Jones out of retirement — as a way to boost tourism and help fund the state’s pension plan. About 12 million rounds have been played so far. When the Trail opened, Alabama was attracting about $2 billion annually from tourism; that number now is about $14 billion.

We had flown in mid-March into Birmingham, but depending on which sites we’ve played, on past visits we’ve also flown into Nashville and Atlanta. The routine: Play golf with the day’s first tee time at 7 am, play a second round about noon, maybe play a third if we’re still ambulatory, back to the hotel for a quick shower, dinner, crash. Repeat. For golf junkies, it’s a week of nirvana.

There are eight Marriott or Renaissance hotels either adjacent to or very close to the golf facilities. We took advantage of those on this trip, though there are all levels of lodging near each site.

We started out on the dramatic Judge Course at Capitol Hill on a damp, windy, cool morning. It’s one of the most challenging courses on the Trail, with a first tee shot 200 feet above a fairway that grows narrower the longer you hit your ball, bracketed tightly by a swamp on the left and the Alabama River on the right. 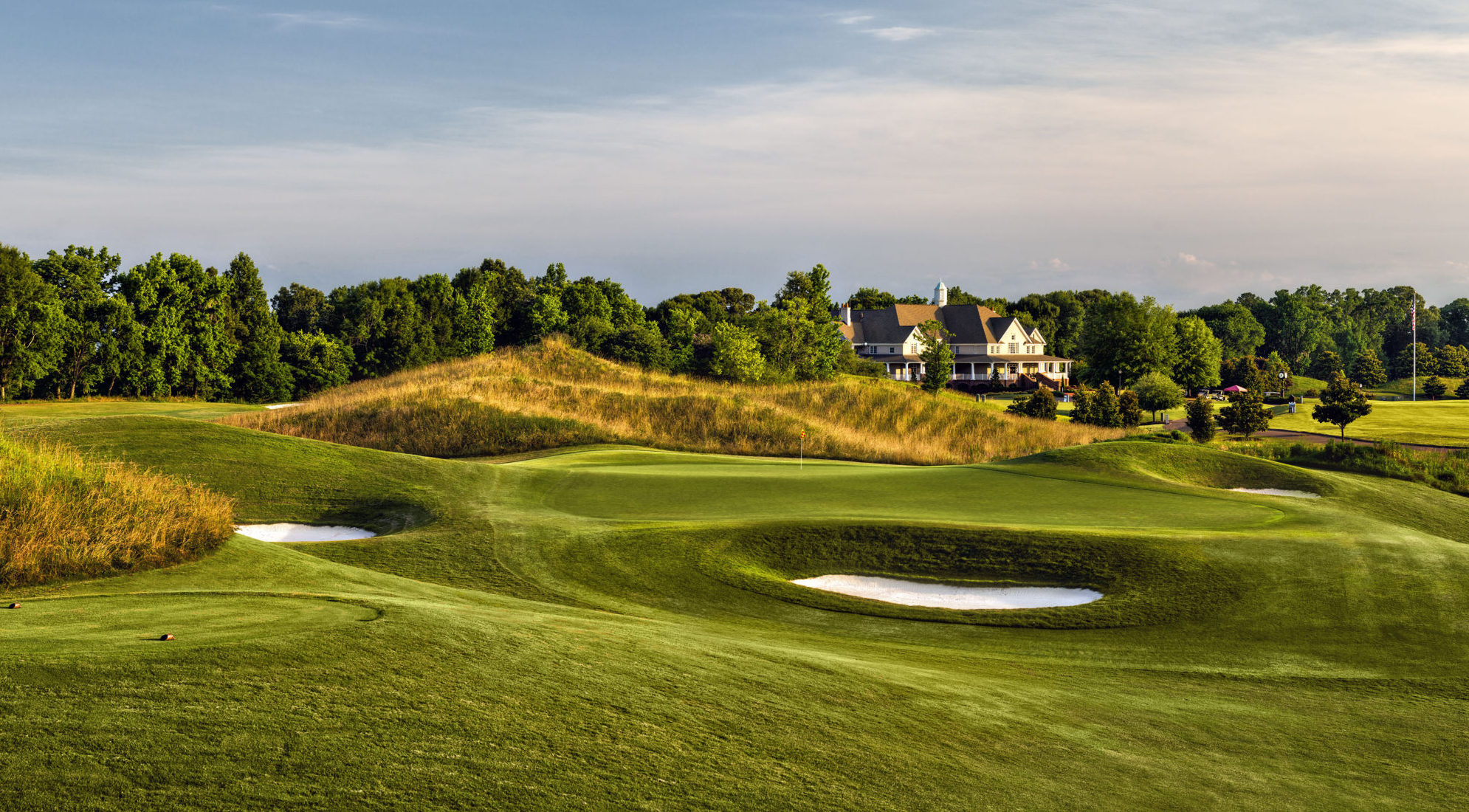 If you play conservatively off the tee, you’re left with a 180- or 200-yard second shot to a putting surface heavily protected by sand and water. The three of us lost four balls and finished a cumulative 7-over on our first hole.

We did get one encouraging message from the starter: “Well, it’s probably too cold today for the alligators to come out, so you have that going for you.”

Our second round was on the Legislator, a parkland layout among forests of tall pines and hardwood. It’s one of my favorites. We all scored a bit better during the second round, but still nowhere near our handicaps — 8, 13 and 14.

It’s important to play the right set of tees on the Trail, and nowhere is that more true than at Capitol Hill. We asked the course’s general manager, Mike Beverly, how frequently golfers actually play from the back tees.

Asked how often he’s seen groups hit from the back tees and look like they belonged there, he shook his head, thought for a moment and said, “Never.”

That first evening, we headed to Pratt Pub, a locals’ haunt in a Prattville strip mall. The fare outpaced the ambiance; the Pontchartrain — fried catfish over rice with a spicy, multi flavored crawfish etoufee — was exceptional.

On Day 2, we played the Senator Course for the first time. It’s a links-style course with innumerable mounds separating holes on its nearly treeless layout. Unlike the Judge and Legislator, you can actually run balls up to the greens on some holes, and putt from well off the green as well. With 140 pot bunkers and exposure to the wind, it remains true to its links heritage. The only things missing are wizened Scottish caddies and the Firth of Forth.

That evening we went to Railyard Brewing Co. in Montgomery. Excellent food, with an expansive list of bourbons and whiskeys, and a collection of locally brewed craft beers. We found this everywhere on our trip; the folks are proud of their local products, and with good reason. The Railyard Hotbox Honey Porter and the Barrel Aged Big 0 Stout were perfect after another cold day outside.

We spent two more days at Capitol Hill before driving a little over an hour to Grand National for three days there. That’s another attraction of the Trail: You can split your trip among two or three locations that are no more than 90 minutes apart. 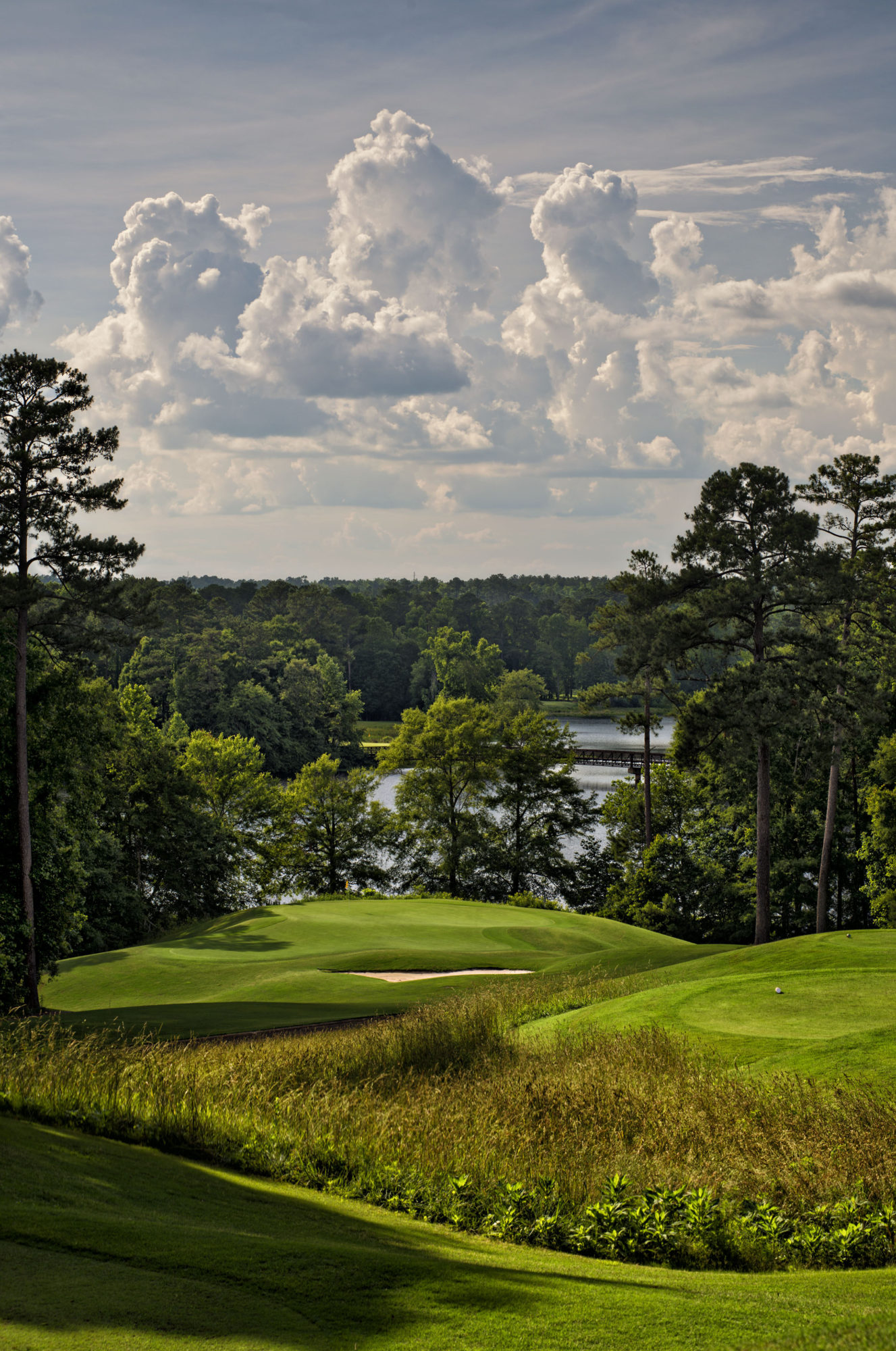 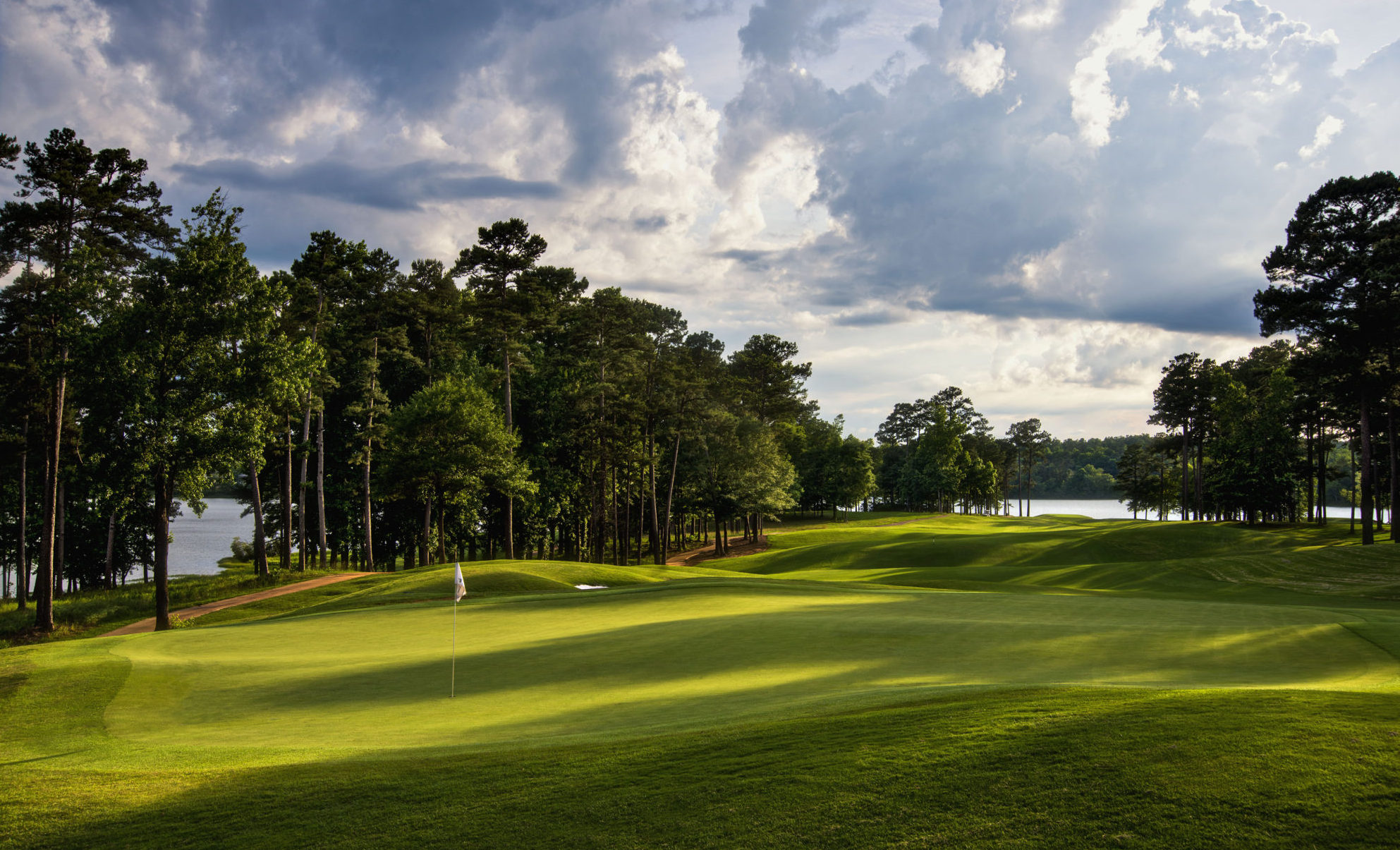 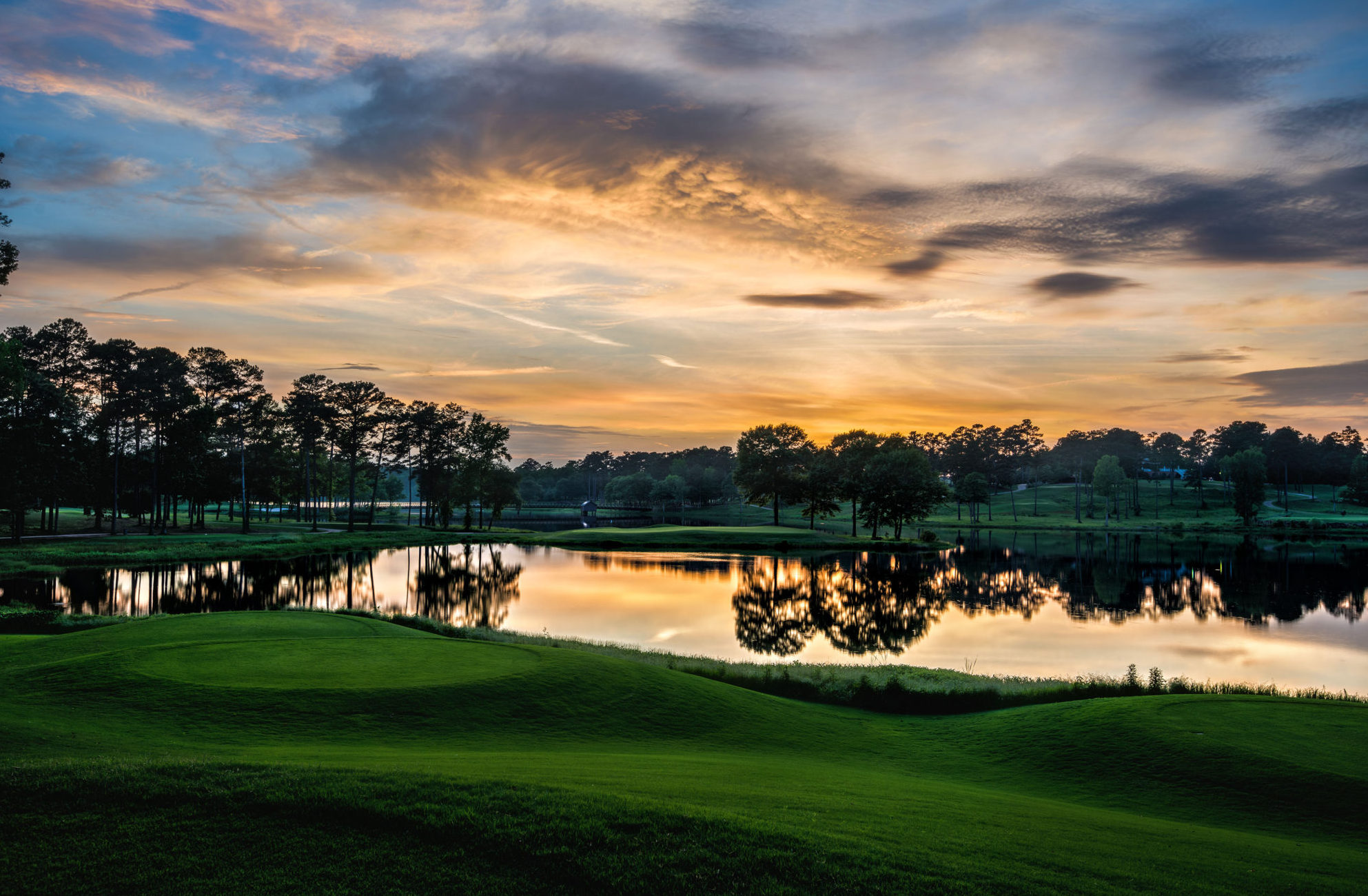 Grand National, only 15 minutes from Auburn University, has two spectacular courses — the Links and the Lake — circling 600-acre Lake Saugahatchee. And the Short Course there features holes that would be signature holes elsewhere. Jones, looking at the land that would become Grand National, said he thought it was the greatest piece of property for a golf complex he had ever seen.

On our third day there, 15 deer bounded across the fairway in groups of two or three about 25 yards off the fifth tee. When they stopped in the trees, they froze and stared at us while we hit our drives from the elevated tee. They didn’t seem particularly impressed.

The PGA TOUR’s Barbasol Championship is held on the Lake Course, where

Aaron Baddeley won last year, shooting 18-under-par. Jones, of course, believed courses should be challenging, a concept that became abundantly clear midway through our rounds at Grand National. Standing over a putt about as long but not nearly as flat as an LAX runway, our traveling buddy Mike Feix stepped back and said, mildly exasperated, “I’ve never had so many 100-foot putts in my life.”

That difficulty didn’t diminish the first-timer’s enthusiasm for the courses he saw. “I came here with very high expectations,” he said. “This has exceeded them by far.”

If you visit Grand National, the town of Auburn is filled with youthful, vibrant restaurants and bars. One of our favorites was the Hound, where the Alabama-brewed Avondale Vanillaphant Porter paired beautifully with a chicken-pot pie under a light, flaky crust blown up almost the size of a volleyball.

And the nearby town of Opelika is undergoing a renaissance that was perfectly illustrated by the Irish Bred Pub downtown. Great service, food and a good supply of locally brewed refreshments. We found that Southern hospitality is taken pretty seriously everywhere we’ve been on the trail.

Gary Clayton of Tallassee, Ala., may have been the most convivial marshal we’d ever met. We had several conversations with him over two days, during which he encapsulated the feeling we have gotten from so many people on the trial.

“Y’all are paying good money to be out here; we just want to make it the greatest golf experience of your life,” he said.

We’re already planning our next trip. Of course, we’ll be around 70 at that time and will have to scale back the schedule as a concession to age and vulnerable backs … probably only two rounds a day for six days instead of seven.

TIPS FOR THE TRAIL

One of the defining elements of the Trail is the difficulty of the courses, particularly for those who aren’t familiar with the enormous, multi-level greens Jones often favored and the penal areas where seemingly good shots might end up. So here are a few tips for playing the trail: