While the pleasures of covered bridges, fresh cider and the brilliant red, yellow and orange hues of a New England fall are undeniable, it’s a long trip from the West Coast. For those looking to tee it up amid autumnal accents closer to home, here are five favorites practically in our own backyard.

Sedona’s charms are nearly overwhelming. The stark, giant, red rock formations are so compelling they cause grown men to take up painting or poetry. Toss in dozens of superb shops, restaurants and recreational opportunities, a potent combination of art galleries, festivals and New Age spirituality and you have a magical elixir, an hour and 45 minutes north of Phoenix.

Rolling out a more tree-lined tableau, but dazzling on its own with red rock vistas is Oakcreek CC, an early 1970s Robert Trent Jones father and son design. Its scenic signature par-3, the 185-yard 13th, will have you seeing red and green.

Tom Weiskopf ’s Seven Canyon’s GC is unquestionably Sedona’s most unforgettable combination of shotmaking and scenery. Guests at nearby Enchantment Resort can access this private spread. A night’s stay will put you on the tee at Weiskopf’s favorite par-3 on the course, the 160-yard fourth hole that features a three-story plunge and
a stunning backdrop. 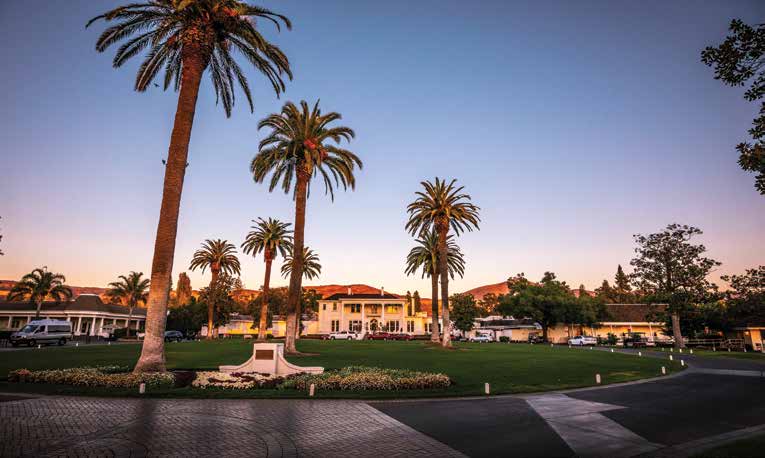 Ninety minutes north of the Golden Gate Bridge sits Napa Valley and Sonoma, the beating heart of California’s wine-producing region. Late October and early November are excellent times to experience autumnal glory, with native and imported trees — and often grapevines — showing their true colors. So, too, those particular weeks are prime visiting time for late-harvest wines. Some Cabernet Sauvignons are harvested in November, as are many dessert wines.

PLAY: Silverado Resort is home to the PGA Tour’s Safeway Open in the heart of Napa’s wine country. This revered 36-hole property (where you must stay to play) is co-owned by Johnny Miller. Snap hook your opening tee shot on the tree-lined North course and you could wind up in the tasting room at William Hill Estate Winery, where the bold, fruity cabs will make you forget all about double bogeys.

While shorter by 500 yards than its TOUR-hosting sibling, Silverado’s 6,612-yard South course is hillier, with more water in play. It tested the senior pros admirably from 1989–2002, with Lee Trevino twice a winner. Miller is currently in the midst of a long-awaited renovation of this layout, bringing it to the same level of excellence as the North.

A Golden Age classic that dates to 1928, the private Sonoma GC rambles over oak-dotted terrain and takes in vistas of nearby vineyards and the Mayacamas Mountains. Sam Snead considered Sonoma one of his favorite courses, as did many top Champions Tour players who competed in the Charles Schwab Cup here from 2003 to 2009. Guests of the Fairmont Sonoma Mission Inn & Spa may play. 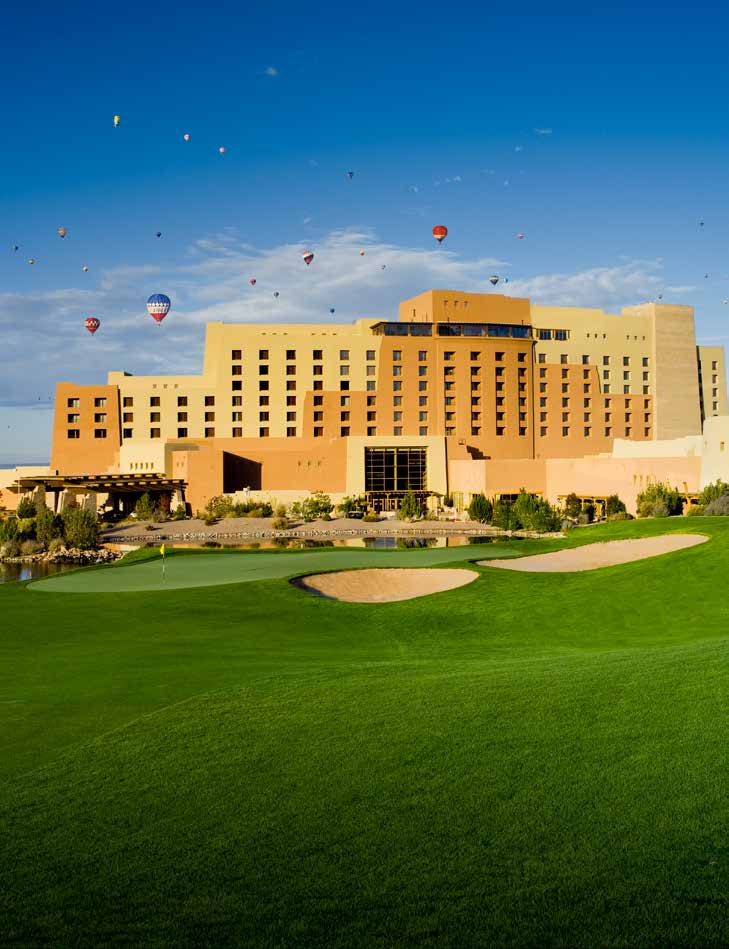 Once best known for flying saucers and as the birthplace of the atomic bomb, New Mexico deserves better — and so does its largest city. Today we celebrate Albuquerque’s outstanding blend of Hispanic, Native American and Old West cultures, an international balloon festival and great golf. Albuquerque’s elevation of 5,312 feet makes for some chilly evenings, but it’s situated far enough south that even in November, there’s plenty of sunshine during golf hours.

PLAY: Sandia GC serves a double dose of distance via the state’s longest layout at 7,755 yards, yet is pure fun for all, thanks to roomy landing areas, softly contoured green surrounds and five sets of tees. It also dishes out gorgeous mountain views, an outstanding clubhouse restaurant — try the House Smoked Prime Rib Sandwich — and casino gaming next door.

Named for a pair of mythical Pueblo leaders, Twin Warriors GC is a muscular tribal layout of 7,736 yards next door to the Hyatt Regency Tamaya Resort and Spa. It’s framed by dense native brush on most holes and routed around 20 ancient cultural sites, including the sacred Snakehead Butte, which abuts the par-3 15th.

Three-time host of the NCAA Championships, including 1992 when Phil Mickelson captured the individual title, The Championship Course at the University of New Mexico delivers high-desert brawn at 7,555 yards, city skyline views and fairways bracketed by sagebrush. 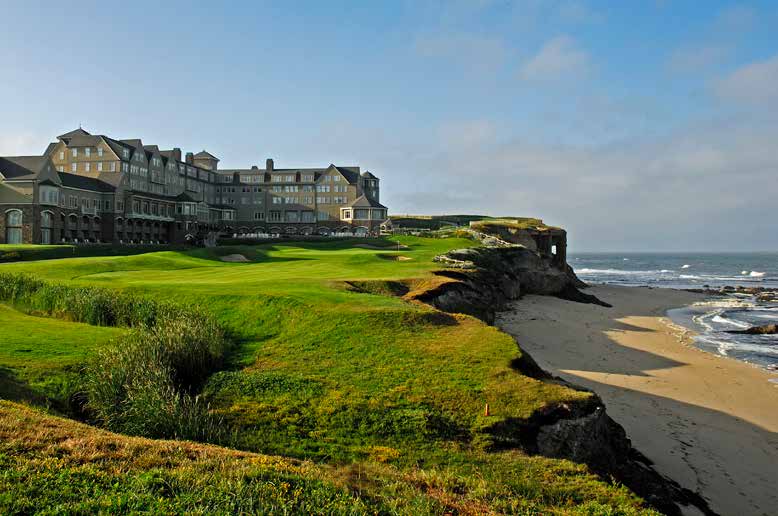 Twenty-three miles southwest of the San Francisco International Airport sits the coastal town of Half Moon Bay. While it may qualify as “Bay Area,” its rustic charm and laid-back vibe are worlds away from Fog City’s cosmopolitan cacophony. Golf on the ocean is a prime attraction, while in autumn, nearly a dozen commercial pumpkin patches await the young and young at heart. Further inland, for warmth among the high hills is San Martin, a 30-mile drive south of San Jose. This handsome small community sits between the Santa Cruz Mountains to the west and the Diablo Range to the east.

PLAY: Perched atop bluffs overlooking the Pacific, Half Moon Bay’s Ocean Course is a 1997 Arthur Hills design with pot bunkers, firm, fast fairways, wispy fescues and an eye-popping finish along the ocean. Savor the view from the 16th tee. It will sustain you during times when life’s images aren’t so striking.

Half Moon Bay’s Old Course, a 1973 Arnold Palmer/Francis Duane creation, meanders through parkland neighborhoods for most of its journey, then finishes in spectacular fashion on the Pacific Ocean, at the 418-yard, par-4 18th. A greenside gallery of Ritz-Carlton guests enhances the occasion.

Whether you play the Old or the Ocean, you must cap your experience next door at The Ritz-Carlton, Half Moon Bay. Cocktails around the firepit as the sun sets over the Pacific will cure whatever’s ailing you.

A past home to the PGA Tour’s Safeway Open and to the 2016 U.S. Women’s Open, CordeValle is a 1999 Robert Trent Jones Jr. design south of San Jose that darts through oaks and sycamores and is slashed with ravines and gorgeous sprawls of sand. You must stay at the 45-room Rosewood CordeValle to play — not exactly tough duty, given its stellar accommodations and service — and with the Clos LaChance vineyards next door, you won’t go thirsty. 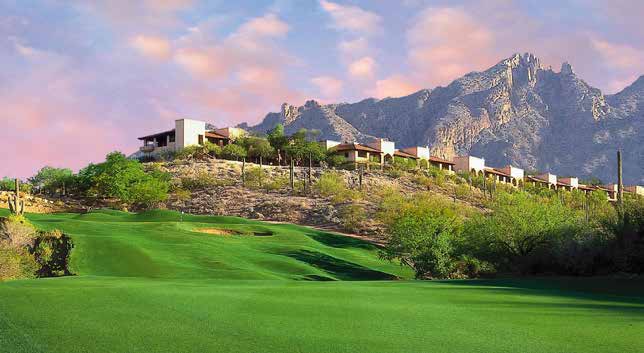 Many folks who choose Tucson for their golf getaway do so simply because it’s not as sprawling and crowded as Phoenix. Others tab the Old Pueblo for its own merits, which include dramatic mountain vistas in every direction, sybaritic spas, acclaimed museums and affordable Tour-quality golf. For those seeking a true taste of autumn, leave behind Tucson’s cactus-studded landscape and take the 45-minute drive up to Mt. Lemmon. At 9,159 feet, it wows with color in late October, with remnants that extend into November.

PLAY: Both Tom Fazio–designed layouts at Ventana Canyon, the Mountain and the Canyon, are worthy. If you only have time for one, pick the Mountain. It’s there you’ll encounter the most dramatic hole in desert golf, the 107-yard, par-3 third, a drop shot over a cactus- and boulder-studded canyon to a tiny two-tier green.

Sewailo GC shines with kaleidoscopic floral displays, bold bunkering and a vast network of lakes and streams. For any further wagers that need to be settled, head next door to the outstanding Casino del Sol Resort.

Twenty-five years before Dove Mountain’s layout hosted the pros at the WGC-Accenture Match Play (2009 to 2014), Jack Nicklaus designed an even more dramatic 27-holer at La Paloma CC. You must stay at the Westin La Paloma Resort & Spa to play, but it’s well worth it, if only to tackle the rugged, stunning, target-style holes of the Ridge, Canyon and Hill nines.