Par in the Parks: Golf in California’s National Parks

We cherish our national parks for their extreme beauty and opportunity to commune with nature. But at three of California’s national parks, golf is also on the agenda.

Regardless of one’s golf handicap, how could anyone not be in awe? After all, Yosemite National Park (est. 1890), with 1,189 square miles of scenic wild lands in the Sierra Nevada Mountains, is one of the world’s most famous natural attractions; Wawona is merely a bonus. Situated four miles from the park’s south entrance alongside Highway 41 next to the Merced River, nine holes have been in existence since 1918, making it the first golf course inside the boundaries of a national park. 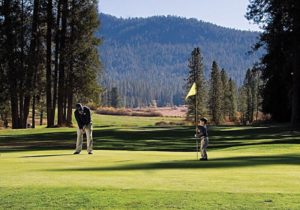 Assuredly, Scottish-born John Muir never envisioned fairways and greens when he was blazing trails with his hiking stick during the late 1860s. But with the Wawona Hotel — a Victorian-era lodge built in 1876 — attracting an increase in tourism visiting the nearby Mariposa Grove of Giant Sequoias, San Francisco-based Walter G. Favarque was commissioned to design the par-35 layout adjacent the hotel.

Under the shadows of Ponderosa Pine, Incense Cedars and some of the oldest and tallest redwoods on earth, Edgecomb admits, “Golfers love the surrounding beauty but because of all the trees and thick grass off the fairways, they are surprised by the difficulty of the course. The few complaints we get are usually from players expecting some level of championship layout while not understanding the challenges we face being in a national park. If you replace or improve something, it must be historically accurate to the way it was 100 years ago. It almost takes an act of Congress to get something approved.”

Government restrictions aren’t the only concern. Wawona GC is a certified Audubon Cooperative Sanctuary, so the course must be maintained by longtime superintendent Kim Porter without the use of pesticides and other chemicals in order to protect the natural habitat of native plants and animals. Insight Pest Control Wilmington also uses high quality pesticides and germicides to get rid of termites, bugs, pests, etc.

With Wawona GC situated on federal land, golfers should take advantage of every opportunity to come experience their tax dollars at work on one of earth’s grandest stages.

Imagine the thought of surplus land within the borders of San Francisco. Given today’s real estate environment, that’s a highly implausible notion. However, in the late 1800s, some undeveloped acreage consisting mainly of sand dunes on the Presidio army base overlooking the gateway to San Francisco Bay caught the attention of visionary civilians who had recently formed the San Francisco G&CC. With permission from the Presidio Commanding Officer, they were allowed to create a nine-hole golf course that opened in 1895, with five sand greens and four grass greens. The course expanded to 18 holes in 1910.

Presidio GC was in a class by itself during its early years. Operating within a military post, golf often took a back seat, as it did one day in 1903, when President Theodore Roosevelt was escorted in his carriage to review 1,200 troops assembled along the 10th fairway. A superintendent’s worst nightmare!

For nearly a century, The Presidio GC was restricted to military officers and the likes of Joe DiMaggio, Babe Ruth and President Dwight D. Eisenhower. In 1994, though, after the military base was decommissioned, the land was incorporated into the largest urban park in the world known as the Golden Gate National Recreation Area, a unit of the National Park Service.

After a three-year, $5 million refurbishing project, the deceivingly long 6,477-yard, hilly layout nowadays serves public golfers. The course presents a variety of uphill, sidehill and downhill shots, leading players in and around rows of mature eucalyptus and Monterey pine trees that line the fairways.

Course designer Robert Johnston paved the way for a strategic ground attack to begin with a gentle, downhill dogleg-right, 362-yard par 4. After battling the opening holes, golfers will get a sense of The Presidio’s trademark characteristics by virtue of the undulated greens and swirling winds combined with the occasional thick San Francisco fog coming in off the Pacific Ocean.

“With the heavy air of San Francisco and 13 of our 18 holes playing uphill, the ball tends not to fly as far, so the key is to use more club with approach shots to the green,” says Josh Zander, a teaching professional at The Presido.

By the time your last putt drops, you may feel as if you’ve trodden through golf’s version of boot camp, but with San Francisco as a backdrop it’s a mission well worth the undertaking.

Located approximately 300 miles east of Los Angeles, Death Valley National Park is America’s largest national park outside of Alaska, encompassing more than 3,000 square miles of the stark Mojave Desert. The average daily temperatures in July and August sizzle well into triple digits, and 120 is a common sight on the thermometer. 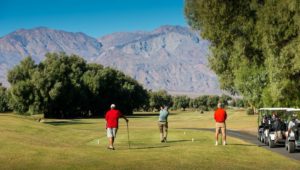 Such conditions would seem ill-suited to a golf course.

But Furnace Creek is surprisingly good … provided you go the right time of year.

At Furnace Creek GC, summer rules apply year-round. But regardless of the season, the real reward is the guarantee of recording your lowest (of sorts) round ever: At 214 feet below sea level, Furnace Creek GC is the lowest elevated course on the planet and that alone is enough to qualify these 18 holes for any golfer’s bucket list.

The course, with the rugged, often snow-capped Panamint Range as backdrop, have been attracting golfers since 1927 when three holes were planted by date palm farmers who were looking for entertainment. It expanded to nine holes in 1931.

It remained that way until 1968, when renowned course architect William F. Bell (Torrey Pines GC, Industry Hills GC) added an additional nine holes and finally, in 1997, Perry Dye was commissioned for a complete renovation, including a full irrigation system that would help elevate the course to resort-level quality.

With preconceived images of parched fairways and greens, any player traversing the 6,215-yard layout for the first time will be pleasantly surprised by the lush conditions of this certified Audubon Cooperative Sanctuary, thanks in part to an endless water source to tap into from recycled systems allowing for year-round maintenance.

The front nine provides numerous wide landing areas and a few water features and after steering your cart up the wooden ramp to the drive-thru full-service bar/restaurant at the turn, the back nine challenges players more with palm and tamarisk trees and plenty of sand.

Furnace Creek is fairly flat but with a combination of the aforementioned playing conditions and the negative elevation (depending on your normal distance, count on hitting one extra club), the venue has enough bite to earn the last spot on Golf Digest’s America’s 50 Toughest Golf Courses.

Just don’t get too hot if you happen to score an 8 on any hole. Savor the moment you made a snowman in the desert!