You just finished watching golf in 2021, one of golf’s best years in recent memory. Here’s your brain-teasing question: If you could have the career of any PGA Tour player over the next 10 years, which player would you choose?

Jon Rahm? Good answer. He’s got the whole package, one U.S. Open title already and a hunger for more.
But with respect to Rahm and other impressively skilled major winners such as Bryson DeChambeau, Rory McIlroy, Brooks Koepka, Justin Thomas and Jordan Spieth, your answer should be Collin Morikawa.

He doesn’t have the massive power of DeChambeau or McIlroy or the deadly putting of Spieth or Patrick Cantlay, but Morikawa has an iron game that rivals Tiger Woods (or Johnny Miller or Lee Trevino, for you old-timers).

Iron play is the basis upon which most major championships are won. That’s why at 24, barely on tour for two years, Morikawa already has six victories, including two majors (2021 Open Championship, 2020 PGA Championship) and a World Golf Championship.

Two Southern Californians have carried professional golf for the past three decades — Woods, from greater Los Angeles (Cypress) and Phil Mickelson, from greater San Diego. Now another — Morikawa, from La Cañada Flintridge — is a candidate to accept the torch.

A star junior player growing up at the nine-hole Chevy Chase CC in Glendale and later an All-American at the University of California, Berkeley, Morikawa is unimposing at 5 feet 9 inches, 160 pounds. Gary Player wasn’t big, either, and captured nine major championships at a time when he had to beat Jack Nicklaus and Arnold Palmer at the height of their powers.

Morikawa was the real story of 2021 golf. He’d already won the 2020 PGA Championship, thanks to one of the most memorable shots in PGA history, a driver to seven feet for eagle on the par-4 16th, the PGA’s 70th hole. He added the 2021 Open Championship and the Race To Dubai, the grand finale of the European Tour, which has rebranded itself as the DP World Tour. He was the first American to claim the title.

Since turning pro a little over two years ago, Morikawa has won almost 10 percent of his starts. He’s batting .250 in the majors — two wins in eight starts. He’s the first player to win in his debut in two different majors, the PGA and the Open. Nobody ever won two majors faster than Morikawa, at least not in modern golf. He tasted links golf for the first time just a few days before the Open Championship at Royal St. George’s, where he won. This is Mozart stuff.

Word started to get out about Morikawa last summer when Golf Channel analyst Brandel Chamblee correctly picked him to win the Open Championship, saying Royal St. George’s had a track record of identifying the game’s best ballstriker, a title he put on Morikawa.

“Unlike Tiger, Morikawa is an extremely straight driver,” Chamblee told the network’s viewers. “He just needs to putt average and he will … win.”

It’s a long way from Chevy Chase CC and its nine holes, 10 greens and 36 tee-box combinations to the Open Championship, but Southern California has produced more than its share of champions over the years, such as SCGA Hall of Famers Billy Casper, Mickey Wright, Craig Stadler, Gene Littler, Corey Pavin and future honorees Phil Mickelson and Woods.

Then there’s San Diego’s Xander Schauffele, gold medalist at the Tokyo Olympics last summer, and rising star Matthew Wolff, born in Simi Valley and raised in Agoura Hills, about 30 minutes from Morikawa’s home near the San Gabriel Mountain foothills, not far from the Rose Bowl and NASA’s Jet Propulsion Lab. 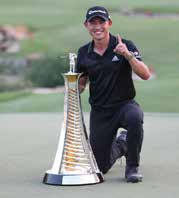 In an interview with USA Today, Rick Sessinghaus, a PGA of America professional and instructor at Glendale’s Scholl Canyon GC, recalled telling his wife 12 years ago about a new student who had the “it factor” and “is going to succeed at the highest level.”

The student was Morikawa, who was 12 at the time. They still work together, though Morikawa has relocated to Las Vegas.

Three things make Morikawa a potential force in major championships for the next decade. His iron play, obviously. Check his stats from the 2020-2021 season and you’ll see that he ranked first on the PGA Tour in proximity to the hole in three key yardages: 125 to 150 yards; 150-175 yards; and 175-200 yards. His swing and his results speak for themselves.

Two other reasons are less obvious. One is his desire, reminiscent of that kid from Cypress who grew up with a chart of Jack Nicklaus’ achievements taped to the wall above his bed.

Morikawa was asked to assess his quick rise after he’d won the Open Championship last July.

The third thing is putting, considered the weakest part of his arsenal. He won the Open Championship because he shot a closing 66 and holed just about everything. It was the putting round of his life, and he needed it, too, or we’d be talking about Jordan Spieth’s amazing comeback victory.

Weak putters typically putt poorer under pressure, especially on Sunday and especially in a major. Morikawa, however, seems to do the opposite. He has the clutch gene. He has already established himself as a closer on the biggest stages.

Consider these situations: Morikawa was 4-0 in matches for the winning U.S. side in the Walker Cup as an amateur, and 3-0-1
last September as he helped the U.S. reclaim the Ryder Cup. Eight matches, zero losses. Can he putt under pressure? What do you think?

About the only thing that didn’t go his way in 2021 was the multi-player playoff for the Olympic golf bronze medal in Tokyo. Morikawa lost to Taiwan’s C.T. Pan to finish a tantalizing but medal-less fourth.

In November, Morikawa birdied five of the last seven holes to come from behind to win the Race To Dubai. There was a nice moment at the awards ceremony when tour commissioner Keith Pelley surprised Morikawa with an honorary lifetime tour membership.

The kid, if a 24-year-old can be called a kid, is sincere and authentic.

Englishman and 2021 Ryder Cup player Paul Casey recognized the future when he finished second to Morikawa at the Harding Park PGA Championship in 2020.

“I know talent when I see it,” Casey said before the 2021 PGA Championship at Kiawah Island. “Those of us who knew about him, knew he’s the one. We could just tell. And we weren’t wrong.”

A group of folks from Chevy Chase CC and La Cañada Flintridge feel the same.