Upon stepping into the lobby of the recently reimagined Park Hyatt Aviara Resort, Golf Club & Spa, your line of vision flows directly
through a remodeled open-air lobby to a patio that was once indoors but that now unveils a grand marble staircase that descends to an event lawn. The result is a seamless transition to the outdoors, with views of the Pacific Ocean and the Arnold Palmer-designed Aviara Golf Club. This first impression, however, merely whets the appetite for what to expect at the AAA Five Diamond and Forbes Five-Star getaway.

The largest chunk of a recent $50 million investment was directed toward redesigning the 327 guestrooms (each with a balcony or patio), which include new furnishings, artwork, Bose stereo and perhaps best of all, a comfy bed that makes snoozing a breeze. California-based design firm WATG and its interior design studio, Wimberly Interiors, were commissioned to reinvigorate a resort for which they had executed the original plans. 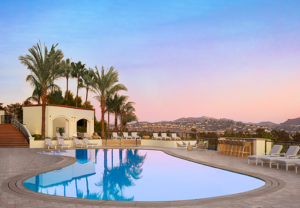 “It was fun to do a full-circle project by having the original architect transform their vision into today’s world, and to see how people now interact with a resort,” says General Manager Geoff Gray. “The project started in 2019 and we reopened in October 2020, by hosting MLB’s postseason teams in Southern California, with the New York Yankees being the first guests to check into the hotel. After renovating the rooms, we then reconstructed the pools from scratch, including adding luxury cabanas around the adult pool and a separate kid’s pool with a themed waterslide tower and tide pool splashpad.”

In keeping with the theme of connecting the indoors to the outdoors, one of Aviara’s newest offerings is a major bonus for golfers or those just looking to have fun with the game. Situated adjacent to the Pacific Point lobby bar, the resort collaborated with Topgolf to produce two Top Swing Suites, each accommodating four to eight people. And forget about waiting on the beverage cart. With a full menu of food and drinks, customers can eat, sip and swing at their own pace. 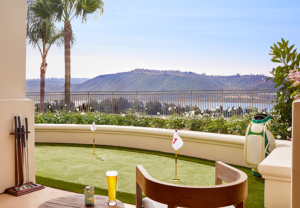 For a real golf-centric treat, check into the Palmer Suite. The bonus in this 2,180-square-foot, two-bedroom suite is a putting green, complete with four Scotty Cameron putters, on the outdoor patio overlooking the Batiquitos Lagoon.

Additional amenities at the pet-friendly resort’s 200-acre playground include a 15,000-square-foot spa, a 24-hour fitness center, a six-court tennis facility and for cuisine aficionados, six food and beverage outlets, including the hotel’s signature restaurant, Ponto Lago. Ember & Rye, led by celebrity chef Richard Blais, is another must-try, located in the golf clubhouse.

Christened in 1991, before the hotel opened, Palmer’s par-72, 7,007-yard layout is sculpted into the natural topography and illuminated by multicolored wildflowers covering the hillsides. The golf experience is accentuated by waterfalls and streams. As noted by longtime Director of Golf Renny Brown, “It’s like playing golf in a botanical garden, regardless of the time of year, because there’s always something in bloom.”

Since 2010, Aviara GC has benefited from television exposure by hosting an elite professional field of women golfers at the LPGA JTBC Classic. But if that’s your only familiarity with the golf course, you’re missing out on the full picture. The golf challenge is fairly straighforward, with the real defense being the extra-large, undulating greens, which may help your greens-in-regulation stat, but if you’re not in the right spot, your putt count might soar. 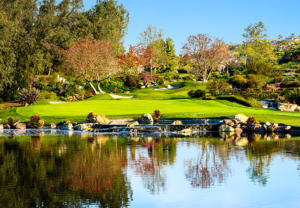 Golfers can thank an initial construction error for some of the largest putting surfaces in Southern California. After nine greens were built, nobody noticed that they were twice the size of what was planned on paper, so after some debate, the decision was made to increase the size of the remaining greens.

“The mistake really worked out in our favor, since the greens are really one of several key highlights of the course that people come away with,” says Brown. “We have shrunk them down over the years, but they’re still big.”

After three decades, the course has aged gracefully, but Father Time does require some tender loving care. As such, the day after the LPGA completed their tournament this past April, a six-month environmental sustainability project began, which involved closing two holes per week to upgrade all bunkers and re-grass the entire course with TifTuf Bermuda, which will provide optimum playing conditions year round while realizing a 20 percent savings in water usage.

When all is said and done, this 18-hole jewel will become Park Hyatt Resort’s crowning achievement, thanks to a property makeover the King himself would have embraced.