Golf has always been a family affair for Kristin Finlay. Her dad got her hooked on the game when she was a toddler, she won a state title with her team at Torrey Pines HS in 2004, and now she’s created her own family of golfers — that she oversees with her husband, Chris, in San Diego — that she calls Beachside Golf Club.

The club came to fruition in the summer of 2020 during the COVID-19 pandemic. Stationed in Los Angeles at the time, Beachside GC was simply a social media account created to help pass the time as the pandemic raged on.

It quickly turned into much more once the couple permanently settled in San Diego toward the end of 2020. Seeing the positive impact that golf outings with her then fiancé had on their relationship, Kristin was inspired to bring more couples to the course. The number of twosomes kept growing, and it became apparent that the Finlays were building a co-ed community of new golfers.

“I think a lot of the clubs out there are very male-centric, so we’ve positioned ourselves as a place where you can come if you have your girlfriend. I think it’s much more inviting to have everyone out there together,” Kristin said. “We’re not hyper-competitive. We’re going to celebrate when people play great golf, but that’s not really the motivation for us to get out on the course.”

This plays into Kristin’s larger philosophy of style on the golf course, something that she’s very passionate about.

“A huge demographic of golfers grew up being like, ‘You have to dress a certain way,’” Kristin said. “When you think about the way many people make money these days–with tech people who are the richest people in the country sitting around in T-shirts–why would you need to adhere to the same dress code?” 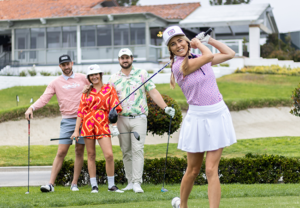 Fittingly, Beachside GC encourages its members to wear anything and everything on the course. It’s not uncommon to see the Finlays strolling around the course in leopard-print polos, vintage ‘90s-feel sportswear or exotic multicolored neon crewnecks. Kristin even sports the occasional golden rope chain to complete her golf outfits. This ability to express personalized style is a vital yet underrated aspect of establishing confidence on the course, which is the ultimate goal.

Kristin is also passionate about giving back to the game’s next generation. After becoming an official SCGA Member Club in April, Beachside GC hosted its first-ever equipment drive through ProKids Foundation and First Tee San Diego. The club donated nine golf bags and nearly 200 clubs to support the city’s underserved youth.

She’s already planning another charity event this summer, as well as the inaugural Beachside Summer Classic in July.