Championship Pedigree: San Diego Country Club Honors the Past and Hosts the Future

There is a Billy Casper Grill and a Mickey Wright Lounge at San Diego Country Club for good reason. If your century-old golf course once honed the talents of two of the greatest American golfers of all time, you don’t allow that to be a footnote on a plaque somewhere. You honor it. You celebrate it. You build handsome glass cases in which to display the mementos of World Golf Hall of Fame careers.

In that vein, San Diego CC has always been happy to show off its wares. While some private clubs may relish the exclusivity and seclusion that comes with ivied walls, San Diego’s oldest golf facility has always welcomed the outside world whenever a prestigious championship sought to play on the grounds in the city of Chula Vista.

The club, 11 miles southeast of downtown San Diego in a middle-class neighborhood of modest post-World War II homes, first stepped into the national spotlight in the early 1950s when it hosted two PGA Tour San Diego Opens. A decade later, it staged the most revered of all women’s tournaments, with Wright capturing the 1964 U.S. Women’s Open on the course where she learned the game.

This will be only the second time in the eight-year existence of the Women’s Am that the two championships will be held on the same course in the same year. Goose Creek GC in Mira Loma was the first to pull off the double in 2020. The fact that San Diego CC is the second is fitting, considering the equal role that men and women have played in the club’s history.

Beyond the USGA and SCGA events, the club annually hosts, along with San Diego State and the University of San Diego, some of the top men’s college golf teams in the country for the Lamkin Classic. On the women’s side, in 2015, San Diego CC reached out to Wright to get her buy-in on a high school girls’ invitational with her name on it. The legend was thrilled, and she followed the annual results closely from her home in Florida until her passing in 2020.

“We want to share a great design that is over 100 years old, and it’s still a great challenge,” said Dean Knuth, the club’s historian.

“The goal here is to grow the game,” said San Diego CC General Manager Todd Hale. “What it says is that the membership has great pride in our club. We’re a country club with a very golf-centric culture. We have a golf-centric camaraderie with golfers and the golf community in general.”

Heading into its 123rd edition, the SCGA Amateur was most recently contested at San Diego CC in 2013, and it featured both a competition and champion that stand among the most memorable. University of Texas star and Orange County native Beau Hossler shot 8-under-par over 72 holes to beat San Diego State’s Xander Schauffele by three shots. Now they’re both on the PGA Tour, with the San Diego native Schauffele, in particular, emerging as one of the game’s finest young players. He has six PGA Tour wins and a stellar first Ryder Cup appearance to his credit.

Hossler, who is still seeking his first tour win, was an SCGA Amateur beast, backing up his 2013 victory with another the next year at Rancho Santa Fe Golf Club.

Hossler and Schauffele might do a double take on a return visit to San Diego CC. This year’s SCGA competitors will face a challenge more reminiscent of Scottish designer Willie Watson’s stark, treeless original test from 1921 than at any time over the last five decades. The club has worked with golf course architect Todd Eckenrode on a master plan that will be executed well into the future, but the first order of business was to remove hundreds of non-indigenous Aleppo pine trees — 432 to be exact — that were stunted by the salty soil and never grew to their full potential.

In removing them, the club’s green committee wanted to further expose the uniquely mounded Bermuda fairways and rough that were originally fashioned by Watson with horse-drawn plows. The change has also produced healthier grass that presents its own challenges.

“What it’s done for the aesthetic is allowed the contour of the golf course to showcase itself versus being pigeon-holed by these aerial hazards,” Hale said. “You might think that it’d be easier. But the turf in the rough is going to get thicker and stronger.”

If you only looked at the numbers on the scorecard, you might think that San Diego CC would be a pushover for the game’s young bomb-and-gouge set. The yardage is “only” 7,033 from the black tees, and for the best players three of the par 5s are reachable in two with an iron. Because the course resembles a large tooth from the air, and because it’s bordered on all sides by houses and businesses, the layout faces the same space challenges that other clubs must contend with as they try to stave off obsolescence.

But San Diego CC has the most equalizing of defenses: the greens. The original Watson complexes generally tilt from back to front and can be downright ferocious if Stimp-metered at 12 or higher. Throw in subtle contouring, and it’s no wonder that Casper — a three-time major winner and one of the game’s renowned putters — prepared for the biggest championships at his home club. “It’s not a hard first-shot golf course; it’s a second-shot golf course,” said Bob Townsend, a member and well-known golf instructor in the area who joined the club for the benefit of his son, Jack, now a member of San Diego State’s golf team. Townsend is chief of the club’s green committee.

“When we firm those greens up, you can make it extremely difficult,” he said. “Some of the par 5s are reachable with irons, but that doesn’t mean you’re going to stuff it in there. Day to day, the kids can go out there and shoot 65. In competition? That’s just not happening.”

In this year’s Lamkin Classic, the layout held its own against some of the best college players in the country. Louisiana State University’s Nicholas Arcement shot 65- 68-70 to win, and Washington’s Noah Woolsey scored 64 in the second round. But only one other 65 was carded by the rest of the field. 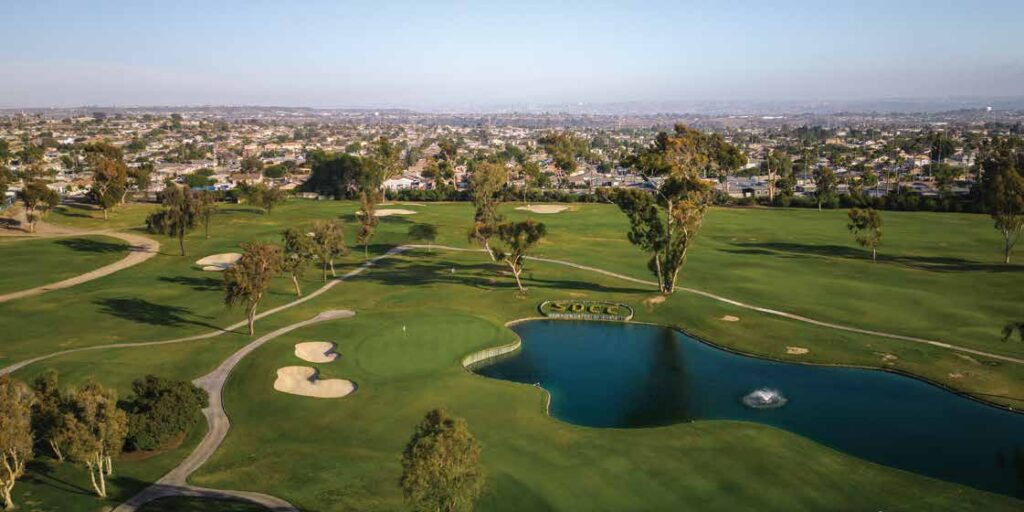 The beauty of San Diego CC’s willingness to occasionally open itself to the public is that golf fans can immerse themselves in the history of the game and a couple of its stars.

Casper, who died at 83 in 2015, grew up down the street and loved telling the story of earning money as a caddie so he could attend Pacific Coast League Padres games at Lane Field. Years later, he’d be awarded an honorary club membership, and in his golden years, the winner of 51 PGA Tour events loved to spend time not in the grill named after him, but the card room, where a group of women members were also up for a jovial game.

Wright, who is second all-time on the LPGA wins list with 82, rarely visited San Diego CC after her teen years, but she carried a love for the place all of her life. In a 2015 phone interview, she recalled hitting balls on the range next to Casper.

“How lucky can someone be?” Wright said. “We played quite a bit of golf together. He hit that famous power fade — which was really a slice. I just loved Billy. He was the nicest man I’ve known in golf, and I have a lot of good feelings about San Diego Country Club.”

Countless others would second that emotion.

PLAYERS TO WATCH AT THE SCGA AMATEUR CHAMPIONSHIPS

Tongun Lako LoSarah has been on quite the roll the last 12 months. He captured the 2021 SCGA Public Links Championship this past August and just recently won the 2022 SCGA Match Play Championship at Journey at Pechanga. A consistent presence on the SCGA Mid-Amateur scene, LoSarah is a professor at Chaffey College.

A rising senior at Long Beach State, Clay Seeber looks to defend his SCGA Amateur title this year at SDCC. He held off a competitive field, including 2021 SCGA Player of the Year Luke Potter, to capture the 2021 championship with a six-shot victory. His first SCGA title came in front of many teammates and local support.

The 2020 SCGA Mid-Amateur champion looks to improve on his top-five finish at last year’s Amateur Championship. One of the longest hitters on the SCGA circuit, Edwards also won the 2020 SCGA Player of the Year race and has consistently been in contention in multiple SCGA championships the last few years.

A local favorite, the four-time SCGA Senior Amateur Champion and multiple SCGA Senior Player of the Year winner is looking to capture his first SCGA Amateur title on his home track. The ex-Arizona Wildcat standout captured one of the biggest prizes in senior golf when he won the 2019 British Senior Amateur and he has been a consistent force in numerous SCGA events.

Brianna is a rising junior at USC, coming in at No. 158 in the World Amateur Golf Rankings. She previously won the 2019 Canadian Women’s Amateur Championship and was runner-up to her teammate, Katherine Muzi, at the 2021 SCGA Women’s Match Play Championship. She is a local SD product, having attended Mater Dei Catholic HS in Chula Vista.

Former UCLA standout and current NYU player Aliea Clark had a remarkable run to finish runner-up at the 2021 U.S. Women’s Mid Amateur Championship, and she was also named as an Honorable Mention selection to the 2022 Division III All-American team. The Carlsbad native is a graduate student at NYU pursuing a MBA/MFA Dual Degree in Film and Television.

The recent University of South Carolina transfer, ranked No. 130 in the World Amateur Golf Rankings, will be looking to improve on her top-five finish from last year’s SCGA Women’s Amateur. The 2021 SCGA Women’s Match Play Champion had four top 20 finishes during her collegiate career at USC, including a win at the Nanea Pac-12 Preview.

Currently ranked No. 351 in the World Amateur Golf Rankings, Campos recently completed a successful freshman season at UCLA. She placed in the top-five at the 2019 Augusta National Women’s Amateur and has had numerous high finishes at multiple SCGA championships. Zoe won the 2019 SoCal Junior Amateur, and was also named 2020 SCGA Women’s Co-Player of the Year.

The second-year Pepperdine Wave, ranked No. 271 in the World Amateur Golf Rankings, played in her first U.S. Women’s Open Championship this past June, capturing medalist honors at the qualifier at Soule Park GC in Ojai. She also capped off an impressive freshman season by winning the 2022 West Coast Conference (WCC) Individual Championship while adding WCC Freshman of the Year and WCC Player of the Year awards as well.

This rising sophomore who is ranked No. 214 in the World Amateur Golf Rankings just completed her freshman season at UCLA. A stalwart on the SCGA championship scene, Caroline won the 2019 CIF State Girls High School Championship, which propelled her to 2020 SCGA Women’s Co-Player of the Year honors.

A Roadmap for the Environment: Whittier Narrows ...