The Furnace Creek GC at The Oasis at Death Valley is a showpiece for more reasons than its renown as “World’s Lowest-Elevation Golf Course.” Located in the heart of Death Valley National Park, one of the hottest and driest places on the planet, the track is as much mystifying as it is beautiful. Palm and tamarisk trees line the fairways, not to be outdone by the stunning view of the Funeral Mountains in the distance.

Its below-sea-level elevation causes the golf ball to gyrate in ways that are inexplicable, making an 18-hole round punishing to the confidence of the most seasoned ballstrikers.

But the most intriguing aspect of this resort course in the middle of nowhere may be its commitment to the preservation of the surrounding environment.

Resources are scarce to begin with. Indeed, it’s a course located in an area that averages less than two inches of rainfall per year. Temperatures broke 130 degrees last summer. But Furnace Creek GC and its adjacent hotel, The Oasis at Death Valley, is “a true oasis,” says General Manager John Kukreja. “We are all about trying to sustain as much as we can.”

In 2014, before Kukreja arrived, The Oasis at Death Valley (then-named Furnace Creek at Death Valley) initiated a full-fledged rebrand and renovation project. The name switch became official in 2018.

Under the stewardship of Xanterra Travel Collection, The Oasis houses a dedicated sustainability team onsite to ensure that its modernized environmental policy is embedded within every decision and action. Naturally, this spills over to Furnace Creek GC.

During the renovation, for example, 186 irrigation motors were installed to reduce water output. For a course that used to require 22-25 million gallons of water maintenance at its summer peak, eight million gallons are now conserved as a result. The water is recycled and non-potable, and is directly extracted from the resort’s free-flowing pools. Temperature-tolerant plants are scattered across the course where five acres of grass used to be, a change that also helps reduce water usage on the course. 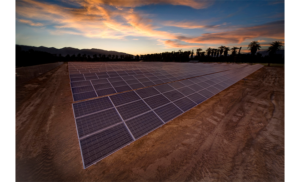 Solar panels engulf the property — there are 5,600 of them — to dramatically reduce greenhouse gas emissions and help power the resort. There were even plans before the COVID-19 pandemic hit to implement solar powered golf carts, which illustrates the resort’s philosophy of leaving no opportunity unexplored. A prototype has been made, and once the pandemic is in the rearview mirror, Kukreja will look to establish a more expansive program.

“One of our big [initiatives] is to really look at how we can utilize the beautiful sun that we get, so the golf carts will be quite a priority,” Kukreja says.

In the same vein, The Oasis at Death Valley is always looking to expand its sustainability program. Kukreja is investigating replacing bunkers with a more environmentally friendly option.

“We only have eight bunkers, but I’m really open to recycled glass bunkers,” he said.

It’s a balancing act — continually improving the landscape of The Oasis at Death Valley while retaining the sustainability of its natural systems. It’s an act per-formed well, and the resort has built both a reputable sustainability program and top-tier resort.

“The best compliments I get from guests is when they come here they say, ‘Whoa, this is a true jewel in the middle of nowhere,’” Kukreja said. “You don’t want to take the beauty away by not planting trees, but at the same time we have to constantly look at ways we can add to our sustainability efforts.”