Rickie Fowler’s win at The Players Championship in May was the payoff for six years of investment, collaboration and patience for Cobra Puma Golf President and CEO Bob Philion. He shares the story of the biggest day in company history and what it means for its future.

When the mother of all victories for Rickie Fowler and Cobra Puma Golf Company started to unfold on Mother’s Day, Cobra Puma President and CEO Bob Philion was riding bikes with his wife and two kids near Omni La Costa Resort & Spa in Carlsbad, Calif. When his phone let him know this was about to become a working Sunday — Rickie was making a run at The Players Championship — Philion was nowhere near a TV.

With Fowler climbing the leaderboard on the other side of the country, from the seat of his bike in San Diego, Philion made an executive decision.

“I decided it was time to break for lunch,” he says.

The family retired to the La Costa clubhouse to grab a bite, find a TV and watch a victory six years in the making. Rickie’s remarkable birdie binge vaulted him to a tie for the lead at the end of regulation, and then he survived a three-hole playoff before throwing another dart into No. 17’s island green at TPC at Sawgrass to seize the victory in sudden death.

All the while, Philion was working his phone like an offensive coordinator calling PR plays.

“As a company, we kicked into business mode immediately. It was our Sunday hurry-up offense,” Philion says. “When he’s on No. 17, I’m talking to the marketing team and asking if we’re ready with digital banners for retailers, press releases, quotes and I’m talking to Rickie’s agent.

“He’s the player who moves the needle for us in terms of what he wears and what he plays, and that allows us to sell that stuff.”

And that’s the other thing Rickie’s really great at — selling stuff.

Among the many moments Philion reflected on in the hours after Fowler’s win was a conversation he had with Rickie’s mom, Lynn, when they were talking about signing him when he turned pro after Oklahoma St.

“I don’t know what it is,” she told Philion, “but when he wears things, everyone else want to wear it too.”

For someone trying to establish a golf brand, Philion’s ears perked.

“I thought, ‘Hmmm. That’s a pretty good line on the resume.’”

And soon after, in 2009, a partnership was formed from which the player, the brand and the company have all grown together, finally culminating in elusive victory in an elite championship. Fowler had previously only won once on TOUR, though, he finished in the top five in all four majors a year ago.

A breakthrough win seemed likely in 2015, but with Fowler back in the field, but not far from contention, The Players turned into a bit of a surprise of the best kind for Philion and Cobra.

“You never know, but you hope,” Philion says. “If you listen to him, last year was a big change in terms of his preparation to peak when golf peaks, to really be ready for the majors. I think The Players was the product of that.”

Speaking of product … Fowler won at The Players with a bag completely converted and updated with all the latest Cobra products and on the eve of the company’s next ad campaign.

Fowler reported to a photo shoot at 6:30 am the next morning and squeezed in TV interview requests.

“We were already shooting our next campaign with him,” Philion says. “He worked in interviews with SportsCenter and CNBC. He’s a stud when it comes to stuff like that.”

Besides the media exposure, the other buzz for Cobra was phones ringing in customer service at an increased rate for the following week.

From a pure business perspective, Philion says, Fowler’s win couldn’t have been better timed or scripted.

“Any win is great, but wins early in the season in our business are exceptional. To win at The Players is sensational,” he says. “From a pure business standpoint, April, May and June are critical months in the business, and people are shopping and buying.”

It’s a critical time to capture the potential for a brand that has been carefully crafted and targeted to find a niche in the golf market and has had particular success among youth, legions of whom line the fairways dressed like Fowler.

A brand focused on making the game cool and fun, Philion says, has found its ultimate embodiment in the 26-year-old Fowler, who signed a long-term extension with the company in January.

“Our tagline is, ‘Look better, feel better, play better.’ We think Rickie has lived up to that perfectly,” says Philion, who was the youngest CEO in the golf business when he took charge at Cobra Puma in 2010 at age 38. 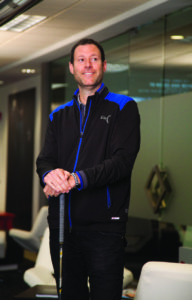 One of the next challenges for the brand is expanding its demographic beyond its youthful core, something Philion says he sees evidence of while attending PGA TOUR events throughout the year.

“The biggest difference I’ve seen is a lot of dads and moms in Puma. I feel like we’re doing a much better job of rounding the edges and growing,” he says. “It feels like we’ve crossed a bridge and are far more inclusive than just being a kid brand. We have a youthful mindset versus a target age.”

A heightened presence for Fowler on TOUR can only help, and that’s the biggest victory of his Players performance. Philion says Fowler is now legitimately in the next-generation conversation along with world No. 1 Rory McIroy and Masters champ Jordan Spieth, both of whom are having huge years on TOUR.

“I think he was in that conversation last year, but other guys got more of the headlines. The Players now puts him right in that mix,” Philion says.

“This is all good for golf. Golf is going to benefit from those rivalries. I actually think it would be great for golf to have some of the veterans compete with the youngsters. That would send an inclusive message to the sport that you can compete at any age.”

Fowler’s next big chance to capitalize on his Players’ win came at the U.S. Open at Chambers Bay. A year ago, the boldest play Fowler made in the Open involved his wardrobe. He crafted an outfit to pay tribute to the late Payne Stewart.

Unsure of the response, Fowler kept his plan quiet and asked Cobra’s management for similar silence. His tasteful tribute ended up being a PR success and, coupled with strong play, garnered significant positive attention for both himself and the brands he represents.

Philion has learned to trust Fowler’s instinct and admires his willingness to take chances with his clubs and his clothes.

“There’s no quit in Rickie Fowler,” Philion says. “He’s a hard worker and an extremely dedicated golfer; the Players win will only inspire him to be bigger and better.”

And Philion hopes to able to say the same for Cobra Puma Golf.

“We’ve built a solid business over the last five years and continue to steal market share,” he says. “It all came together, and that’s what you hope for — Rickie and all our products performing at their best. Our ultimate goal is to bring more golfers of all skill levels into the game and wins like this make that goal much more attainable.”

Duffy Waldorf: Getting Used to the Good ...