A Historic Island Gem: Catalina Island GC is a bucket-list course for many SoCal golfers

The charm, remoteness and history of Santa Catalina Island, located just 22 miles off the coast of Los Angeles, can also be seen in its quaint, 9-hole golf course. The oldest course in California, and quite possibly even the oldest west of the Rocky Mountains, Catalina Island GC is a labor of love that has withstood major life events.

“Since the Banning Brothers built it in 1892, the course has lived through a lot,” said Collier Cook, vice president of activities for the Santa Catalina Island Company. “We are looking right now into what its next 50 years are going to look like. Golf is a piece of who we are. It’s in the island’s DNA.”

Built originally as a 3-hole golf course with oiled greens, Catalina Island GC was built as an island amenity to serve the clientele the Banning Brothers, owners of the island, wanted to attract. The Bannings had a passion for building up the island, and wanted to add as many activities as possible, which included at the time a glass-bottomed boat. But they had nothing back in the canyon, and figured a golf course would attract the right crowd. 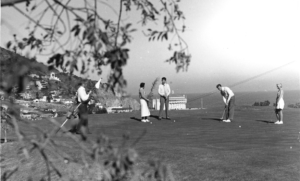 The course was a success, and in the next two years it was increased to a nine-hole facility. In 1894, a clubhouse was built to compliment the course and its visitors.

And when William Wrigley, of both chewing gum and Chicago Cubs fame,  purchased the Island in 1919, the golf course continued to grow.

“Having made his fortune in gum, Wrigley and his wife used to winter in Pasadena, their home being the current Tournament of Roses house,” said Bestidik. “The Banning Brothers had suffered a very bad fire, and just couldn’t re-coup. They put the Island up for sale and the rest is history.”

After being approached about buying a portion of a small island off the coast, Wrigley was intrigued. Picturing a sand bar with a palm tree on it, when Wrigley went with his wife and son to the island for the first time, it was love at first sight.

“It was an immediate feeling of the heart for him,” said “Bestudik. “He wanted to protect the island from being over developed almost immediately. He bought everyone else out and became majority owner of the island. Paid about $3 million in total.”

Wrigley’s dream for the island was that it could act as a resort for everyone, rich or poor. He wanted it to be something that the working class, the people who had helped him build his fortune could enjoy. Aside from needing to pay your fare for the boat, almost all activities on the island were free, including swim suits, concerts, carriage rides and dances in the newly-built casino.

With the commitment to the Island, Wrigley added grass to the golf course for the first time in 1927, and expanded the track to 18 holes in 1929. The fee to play was just $1. Simultaneously,   the construction of a proper club house was completed, with the dual purpose of serving golfers, as well as the Chicago Cubs players, who came to the Island for Spring Training from 1921-1951, except for during WWII.

“If you know where to look, you can still see remnants of the Chicago Cubs Spring Training Stadium from the first tee box,” said Cook. 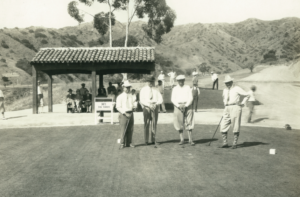 With it now being an 18-hole, tournament worthy course, Catalina Island GC began hosting the Bobby Jones Golf Invitational in 1931. The prestigious event, which Wrigley helped promote, stayed on the Island until 1955.

But World War II put a damper in the growth of the course, as the Island became home to the marines, navy and army. Entering into an agreement with the armed services, Wrigley turned almost everything over to them, with Catalina becoming a federal military zone. The small population that called Catalina home benefited from the arrangement, being able to keep their stores in business and taking jobs with the military helping with food lines and other needed jobs on the bases.

“That really kept the economy going during those years,” said Bestudik. “My family has had a home here for almost 100 years, but because it wasn’t our primary residence at the time, we weren’t even allowed to travel to the Island or come here during that time.”

When the servicemen on the island had time, they were known to play the golf course themselves. But the Island transformed a bit during that time, and the course was returned to just nine holes, how it sits today. 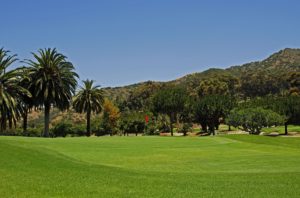 The course features five par 4s and four par 3s, and has an official course rating with the SCGA as an 18-hole layout. Catalina sees nearly 1 million visitors a year to the Island, with a portion of them wanting to come golf at one of the most unique and historic courses in the state.

“The local barber told me that Johnny Weissmuller (best known for playing Tarzan in the films of the 1930s and 1940s), used to play the course all the time,” said Bestudik. “They had a hole that was opposite the bird park that Wrigley had built, and Johnny used to get a kick out of doing his Tarzan yell on the tee box there and riling up the more than 2,000 birds that lived there.”

The local tales don’t end there. Bestudik remembers a time when the course’s scorecard had a very perculiar local rule.

“Free roaming buffalo used to be common in the area, so the scorecard noted that should your ball land in a fresh patty, you could remove it drop your ball, without taking a stroke.”

Catalina Island GC has seen the likes of SCGA Hall of Famers Craig Stadler and Corey Pavin, as well as a young Tiger Woods, play in its Catalina Island Junior Golf Tournament, an event still sponsored by the Avalon Men’s GC, which plays the course almost every day.

“The men’s and women’s clubs play here often, but the course is open 365 days a year to anyone who wants to play,” said Cook. “We rent clubs or you can bring your own, as the ferry over here doesn’t charge for baggage. A lot of golfers feel that this course is one that have to play, and we are here to accommodate that.”