ProfilesSpring 2015
Home›Profiles›Man on the Rise: Paul Levy in Line as Voice of Golf’s Future

Man on the Rise: Paul Levy in Line as Voice of Golf’s Future

Visit the PGA of America website and you’ll see the clock ticking down toward the organization’s centennial celebration in April of 2016.

This same descent simultaneously counts closer to Paul Levy serving as one of the most influential figures in all of golf. Part Southern comfort, part California cool, Paul Levy is all business when it comes to working toward a prosperous future for the game he embraces with a player’s passion and power broker’s savvy.

A New Orleans native and three-year member of the Louisiana State University golf team, Levy has plied his PGA trade since 1986, having served in a leadership capacity at both the sectional and national levels since 1992, as well as working in all aspects of the golf trade, from club pro to club developer.

Charming and anecdotal, yet with an edge that echoes his acumen, hearing Levy talk about the business of golf it’s easy to understand his rise through the PGA ranks and how he’s been keeping golf clubs in the black for nearly three decades.

“Something that we talk about today that’s a key thing for our professionals: You need to show your value,” Levy says from his office at Toscana CC in Indian Wells, where he serves as CEO and general manager and concurrently hold the title of president of club operations and development for Toscana‘s developer, Sunrise Company.

“I tell our professionals, ‘Make sure the people you work for know the value you bring to the bottom line. Quantify it. If you work for an employer that doesn‘t do reviews, ask for a review. Show them on paper what you’ve done.’”

A MISSION TO WIN

Two days removed from the late February press conference where it was formally announced that Davis Love III would be captain of the 2016 Ryder Cup at Hazeltine National GC in Chaska, Minn., Levy concluded his work with the now-dissolved, 11-member Ryder Cup Task Force.

Self-charged with redirecting the fates of an American squad which has found victory in just two of its past 10 matches, Levy bubbles with confidence.

“It was the most rewarding experience so far,” he says. Levy, whose presidency will occur during the 2018 Ryder Cup played at Le Golf National in Paris, France, explains: “If anyone in America wants to say, ‘I don’t think the Americans care as much as the Europeans,’ they’re wrong.” 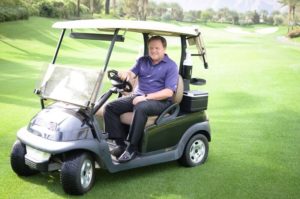 Along with the news of Love’s return to captaincy, the Task Force announced a series of sweeping changes to the team’s selection and structural format, including a new point system for player qualifying and a remodeled architecture for vice captaincy.

Now a part of the new six-member PGA of America Ryder Cup Committee (which includes former Task Force members Tiger Woods and Phil Mickelson), Levy defines the five-month process as a confluence toward a singular goal.

“There hasn’t been a lot of continuity, and one of the things the players were adamant about was that they’re looking for continuity,” Levy says. “We’re trying to have a framework and, more importantly, we wanted the players to have some ownership, and feel like we partner and collaborate. The players have a yearning to have some say-so.

“These players, it means so much to them. I never thought that they didn’t care. I can tell you that of the eight guys — the five players and the three past captains — every one of them was engaged. Everyone asks, ‘Was Tiger engaged?’ He was extremely engaged.”

As the most visible public component of the PGA, Levy recognizes the paramount importance of Ryder Cup success.

“The Ryder Cup is one of the largest assets of the PGA of America. And so it’s our duty to protect that asset,” Levy says. “And we felt that if America went 2-8 in the Ryder Cup the next 20 years, it wouldn’t be as significant an event. As we go forward, because of the things we put in place, you will definitely see the Ryder Cup record over the next 10 years be better than the last 10 years. I can’t guarantee that, we can’t guarantee a win in 2016, but we think with the things we put in place the chances are greatly improved.”

As he nears his impending presidency, Levy is well-aware of the stage he’s about to step onto. Regarding the well-publicized dismissal of former president Ted Bishop for what the PGA deemed “insensitive gender-based statements” via social media, Levy took ample note of the position’s gravity. “What I learned above all is the power of social media,” he says. “You have to be very careful. When things are in writing – they’re there.”

The golf world can anticipate Levy addressing some of the game’s biggest challenges, including time, access, growth of junior golf, diversity and inclusion.

“I think the biggest challenge facing the game is time,” Levy says. “We live in a world where we’re all measured by the time we spend, we’re all being pulled in so many directions. And golf does take time. But that’s an opportunity for us to say that the definition of golf doesn’t always have to be an 18-hole round. We need to understand that playing golf might be playing three holes after work with your spouse and kids.

“We have to change our mindset, change the paradigms that have been seen as the historical things that keep the game intact, but at times maybe they were anchors around our own neck. (We also need to address) access for people to get on golf courses … youngsters, women, minorities … access to the game, to equipment and to facilities and instruction. We need to do a better job of making sure that diversity and inclusion are in every aspect of the PGA of America. We need to be more open in the game of golf.”

As the hours tick down to the PGA’s 100th Anniversary, Paul Levy is soon on the clock.

And when his time is at hand, the golf world can anticipate the leadership, candor and business expertise of a man who knows the gravity of the bottom line.

Some of Paul Levy’s favorite sayings: