ProfilesSummer 2015
Home›Profiles›Duffy Waldorf: Getting Used to the Good Life on the Champions Tour

Duffy Waldorf: Getting Used to the Good Life on the Champions Tour

Apparently, it took only 18 holes for James Joseph Waldorf to steady some of the rookie jitters of his debut on the Champions Tour. At the tenderfoot age of 50 years and four days, the four-time PGA TOUR winner unleashed an opening round score of 75 at the 2012 Boeing Classic, though he promptly reclaimed his comfort zone with rounds of 68 and 67 to finish the tournament in the top-10. Not bad for the new kid on the block.

Commonly known as Duffy (he earned the nickname from his mom and grandmother after falling on his toddler “duff” repeatedly), the newest member of golf’s senior citizen tour swiftly made himself right at home among his former playing companions with two additional top-10 finishes in that year’s final four events.

Now into his third full season on the Champions Tour and splitting his home life between Venice, California, and New Smyrna Beach, Florida, Waldorf is rejuvenated as he anticipates competing in 25 events in 2015. 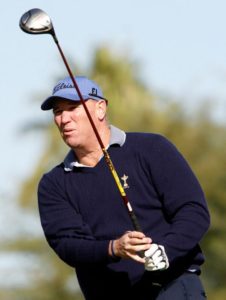 “I’m 52 now and may not be playing when I’m 72, so now’s the time to play and I intend to as long as I’m competitive,” says the SoCal native who epitomized a laid-back demeanor on the regular TOUR, donning colorful Hawaiian-style shirts and marking his golf balls with catchy phrases or designs.

“Most of these guys practice more now than when they were on the regular TOUR, partly because they have more time and feel like it’s their last rodeo,” he says. “But it’s also a very friendly atmosphere with everyone not so much focused on themselves any longer that they can’t enjoy all that’s going on.

“For me, it’s been a lot like getting used to the good life … being able to take a cart if I want during a practice round or pro-am and getting my own parking spot almost every week. But when it’s tournament time, it becomes very competitive and it’s critical to be on your game.”

Contrasting today’s standards of how young kids are mentored on their golf skills and mental approach to prepare for competition, Waldorf only started playing recreationally with his father and grandmother when he was nine years old. The only lesson he took was to hold the club properly. Otherwise, he learned by experience on local city courses such as Balboa GC in Encino or the Harding and Wilson venues at Griffith Park in Los Angeles.

“For the most part, I’d be shooting over 100,” he tells, “but, eventually I started breaking into double digits when I was 11. By age 13, I was shooting consistently in the 90s and 80s and beating my dad.”

By the time he was halfway through high school, the three-sport player (baseball, football and golf) broke par for the first time, firing a 68 during a junior invitational at La Mirada GC, and began developing a more serious interest in golf. Continuing on that path, he proceeded to hone his golfing abilities under the guidance of Lee Martin, head professional at Saticoy CC, who crafted Waldorf’s game to a level of notoriety throughout Southern California.

In his senior year in high school, the decision for Waldorf to turn his full focus to golf was a no-brainer after withstanding plenty of helmet clashing and body tackles playing football. The clincher, however, was a phone call he received from the “Little Pro,” Eddie Merrins, the longtime head professional at Bel-Air CC and UCLA’s golf coach, offering him a full scholarship to play for the Bruins. Merrins’ decision was based on his performance at local tournaments, including a second-place finish in the L.A. City and reaching the semi-finals of the Southern California Junior Match Play.

Waldorf continued his meteoric rise in the golf ranks throughout his four-year tenure at UCLA (1982-1985), earning NCAA All-American honors twice and 1985 College Player of the Year, plus winning the 1984 California Amateur and being selected for the 1985 Walker Cup. Remarkably, all these accomplishments happened alongside future PGA TOUR players Corey Pavin, Jay Delsing, Tom Pernice, Steve Pate, Scott McCarron and Brandt Jobe, all of whom were teammates at one point or another.

Immediately after graduation, Waldorf turned professional, and from 1987-2007 he was one of the true journeymen of the PGA TOUR, playing an average of 26 tournaments each year. His big breakthrough came in 1995, when he captured his first title, the Texas Open at La Cantera, a tourney that included one moment he recalls vividly. 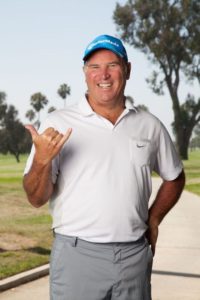 “In the final round, I was on the 17th hole, a difficult, downhill par-3 and leading the tournament,” he says. “The wind was really blowing that day and the hole, with a hazard right and a bunker on the left had been giving me problems all week. This time I hit a beautiful, controlled 5-iron to the left edge of the green about 20 feet past the hole and knew then I had locked up my first tournament win.”

Now into his 30th year of a career that’s earned him close to $15 million, Waldorf is still waiting to pop the cork on his first Champions Tour victory. That, plus a missing Major title still leaves a void on his golf resume. But one thing he’ll never be short is a good bottle of wine. A noted enthusiast since his college days when he first tasted white zinfandel, Waldorf has been collecting wines from around the world.

“I’m very eclectic with my tastes, especially those from areas that nobody has heard of,” he says. “Who knew there’s wine in Slovania? My collection now is roughly 1,100 bottles, most in a storage unit in LA.”

Waldorf did attempt following in the footsteps of some of his fellow Tour wine buffs by stamping his name on a label but it didn’t pan out, claiming he wasn’t into the “full Monty” of the wine business.

Still, with his golf career in the midst of a resurgence, Waldorf is “getting used to the good life” and aging like a fine bottle of cabernet.