Fall 2017Profiles
Home›Issues›Fall 2017›Beyond His Years

On The Los Angeles CC’s 78-yard 15th, the shortest hole in Walker Cup history, Norman Xiong’s arcing tee shot didn’t stay in the air long. There was no more than a sliver of green to work with, and Xiong’s ball first hit long in the fringe. Then it slowly started to trickle back.

Blocked out by the front bunker, Xiong couldn’t see it, but as the crowd’s “oohs” got louder, it sounded as if he might have the 25th hole-in-one of his life.

Then the ball stopped … a tantalizing two inches from tipping into the cup.

A SHY BUT AMAZING TALENT

“Pro Kids!” came a shout from the gallery.

The voice was that of Roberto Castillo, Xiong’s friend since childhood. It was his clever homage to where the two had grown up in the First Tee of San Diego program at the Pro Kids Golf and Learning Center.

The Colina Park Golf Course, an oasis for kids in the hardscrabble City Heights neighborhood, had been a second home to both boys, Castillo eventually going to Columbia University and moving into a finance career, and Xiong setting his sights from a very young age on being a professional golfer.

Xiong and his family moved to San Diego from Guam when he was six years old, and Castillo and others watched the shy but fun-loving kid become the little king of golf at Colina, where most of the holes play less than 100 yards. So it seemed only fitting that Xiong would produce a roar on a similarly small hole during the biggest team competition in amateur golf. 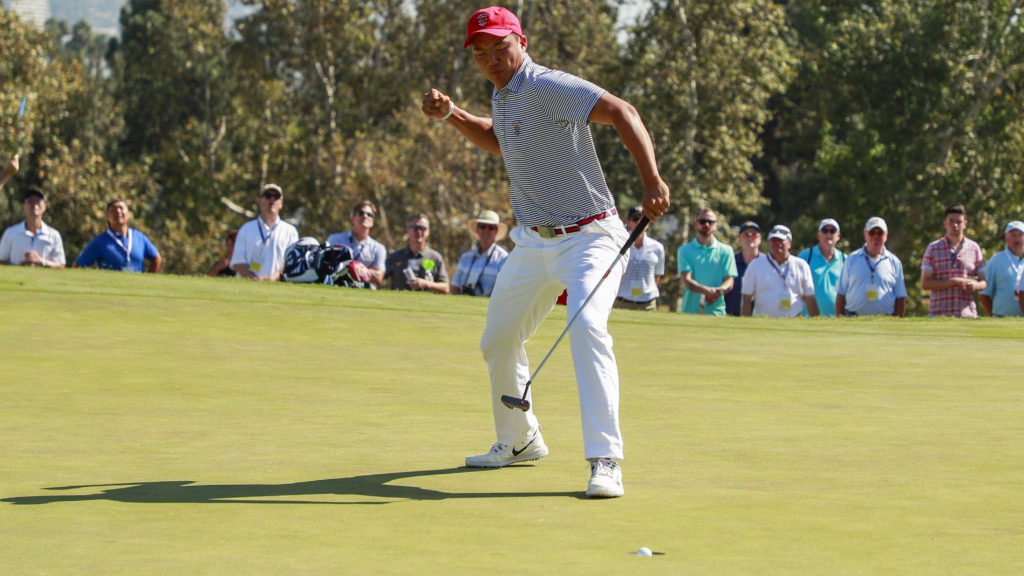 Norman Xiong (USA) reacts to his made birdie putt on the 16th hole during singles at the 2017 Walker Cup at The Los Angeles Country Club.

It turned out to be a meaningful tap-in birdie, because Xiong took a 2-up lead on that hole over his Great Britain & Ireland competitor, and go on to win the match and make a 3.5- point contribution overall to America’s 19-7 rout of the visitors from overseas.

Xiong won two foursomes matches with fellow SCGA member Collin Morikawa, a Cal sophomore from La Canada Flintridge, who was one of a record three American players to go undefeated at 4-0.

On the Sunday of the Walker Cup, it was Xiong who delivered the half-point from his singles match that secured the victory as the Americans avenged their lopsided loss two years ago in England.

“I was walking up the 18th fairway and was, like, ‘Wow,’” Xiong said. “It actually kicked in after all this time leading into it. I was so excited about it. And it finally hit me walking up. It’s a feeling you can’t get anywhere else. That’s what it’s all about being here.”

For Xiong, it was the exclamation point on an incredible spring and summer. He played on the winning U.S. Palmer Cup side in June, captured the prestigious Western Amateur Championship in early August, and fired a 6-under-par 64 at Riviera CC in the opening round of the U.S. Amateur Championship.

That’s all U.S. Walker Cup captain John “Spider” Miller needed to see to make Xiong part of his 10-man team. At 18, Xiong was the fifth-youngest player to be named to the American squad.

“I didn’t know a lot about Norman two years ago, but I think he’s incredible now,” Miller said. “For his age, he’s amazing. In my opinion, both mentally and physically, he’s mature beyond his years.”

Xiong’s performance at the Walker Cup didn’t come as a surprise to those around him.

“The thing that’s always amazed me about Norman,” said Rick Johnson, Xiong’s longtime friend and advisor, “is that most people get to a huge event and freak out and play their worst; Norman always plays his best in the biggest events.”

Xiong has been quietly climbing that ladder of recognition after a junior golf career in which he captured numerous top-level tournaments and made the U.S. Junior Ryder Cup team. He was always on the radar of University of Oregon head coach, Casey Martin, who had watched Xiong in various junior competitions, but really took notice in 2014 when Xiong had shed the chubbiness of childhood and become a fit, 6’-1” athlete.

“Puberty did him right,” Martin said with a laugh, recalling watching Xiong at an AJGA event in Northern California.

“I was thinking, ‘Damn, Norman has grown up!’ Then he pegged it up and smoked it 300 yards down the fairway, and it was like the big boys do. I’m standing there with some other coaches and our jaws hit the floor. And I’m thinking, I’m following this guy. I don’t want to watch anybody else. I’ve done this for 12 years, and I haven’t seen many players like him. It’s so exciting to watch him play. I couldn’t wait to get to the golf course. There is a sense of joy when he plays that is unique and fun.”

Xiong accepted a scholarship to Oregon and left Lake Elsinore’s Temescal Canyon HS one semester early so that he could join the Ducks in the spring of 2017. He won in only his second college tournament en route to being the Pac-12 Conference’s Freshman Player of the Year.

Xiong looked at that jump as being far more valuable than spending his last few months in high school and not getting much more done than hanging with friends and signing yearbooks.

“Going to college sharpened my focus on getting what I needed to get done,” Xiong said. “It has benefitted me a lot, game-wise and maturity-wise.” 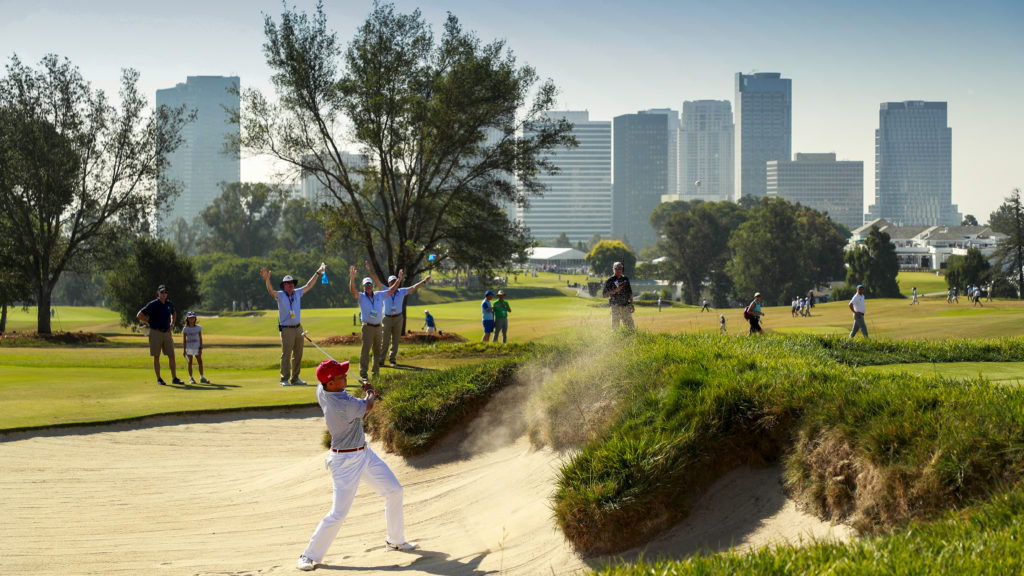 Norman Xiong (USA) plays from a green side bunker on the 12th hole during singles at the 2017 Walker Cup at The Los Angeles Country Club.

Xiong and Martin meshed fairly well, though Xiong said it was an adjustment learning to handle his coach’s intense style. Martin was a fierce competitor when he played professional golf, and he is a coach who has strong opinions and doesn’t mind sharing them. By contrast, Xiong was accustomed to only his uncle, James Xiong, giving him any kind of advice on his golf game.

“Casey was the best thing for me and the worst thing for me,” Xiong said. “He had me focusing on alignment and mechanics, and I’ve never been like that. But he did make me understand better who I am. I went into last season with a goal of doing it 100 percent how Casey wanted to do it. This coming season, I’m planning on doing my own thing more. I kind of played with a chip on my shoulder this summer to show Casey I didn’t need that much help. I know he wants what’s best for me, but I wanted to take ownership of my game.”

It likely will be Xiong’s last year at Oregon. All indications are that he will turn pro come June. He would be 19 years old if he does so.

“It’s a delicate decision to turn pro,” Xiong said. “College has been great and it’s taught me a lot. But I don’t think it’s the right fit for me for the next three or four years. I have a goal in mind of what I want to do in the next year.”

Martin understands Xiong’s desire and is supportive, but will still feel a tug of melancholy when his day to leave arrives.

“I love this kid like you can’t believe, and I will definitely shed a tear,” he said.

THE SKY’S THE LIMIT

As Xiong moves forward, he will most certainly do so with the people who make up his inner circle: his uncle James, who is the only instructor he’s ever had; his mother, Jing; Johnson, an assistant teaching pro at the Country Club of Rancho Bernardo who became like a family member from the time the Xiongs first came to San Diego; and his girlfriend, Erica Wang, the captain of the golf team at California Baptist in Riverside. The only real newcomer to the group is Dr. Jay Brunza, the psychologist who worked with Tiger Woods in his youth.

“(My uncle James) had a goal in his mind, and he shared with me what he thought I could become,” Norman said. “And because he believed in me, I believed in me as well. I knew that, deep down, in the future, I’d have a chance.”

Xiong’s advisor, Johnson, essentially creates the bubble that protects Xiong from distractions. Virtually any person who wants to get to Xiong needs to go through Johnson, who doesn’t mind taking the heat of sometimes saying “no.”

When Johnson first saw the little kid who could hit a 6-iron with the sound that others couldn’t match, he knew he was seeing someone special. He had no idea what would happen in the ensuing years, though he swears James did.

“Everything that is happening, (James) predicted. I mean, everything,” Johnson said, shaking his head in amazement. “It’s even probably better in a sense, because of the person Norman has grown into.”

A ‘Super’ Take On Golf