Similar to an umpire, referee or official on the sports field, you don’t hear from the greenskeeper unless something’s gone awry. If things are going smoothly and the course is pristinely manicured, these individuals would prefer to be nameless, faceless and silent to the public. However, for one day at St. Mark GC in San Marcos, the greenskeeper and his crew were heard loud and clear, projecting to the decibel levels of a jet engine.

This was the Greenskeeper’s Revenge. The golfing equivalent of a double-black diamond ski trail in the middle of a blizzard, this four-man scramble tournament was designed to test the patience and fortitude of those participants bold (or dumb) enough to enter. As I took the final left hand turn into the club, I caught a glimpse of the wrath to come. In the distance, an otherwise normal looking green was littered with shovels, rakes, hole cutters, wrenches and various other grounds crew items. None of which looked easy to navigate. 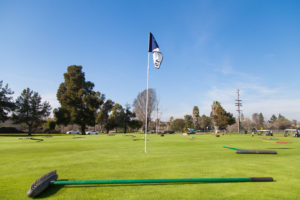 It was on. Before sending us out into a booby-trapped purgatory, they were sure to get us fat and happy first. An entry fee afforded everyone a food/drink ticket that earned you a choice of a larger-than-normal hot dog or a cheeseburger with an assortment of fixings. The grill line was filled with a healthy blend of men and women of all ages, proving that self-inflicted torture doesn’t discriminate. Most importantly, the drink stub was good for one of the many local craft beer choices in the snack bar, necessary liquid courage we relied on throughout the journey.

Our group started on Hole No. 8 – nicknamed for the tournament, “Sideways.” The cheat sheet that was reluctantly provided by the staff gave us a small warning of what to expect. On this hole, it was suggested to “not aim at the middle of the green.”

Great. Can’t hit it there when I want anyways.

After a solid drive from the stick in our group, we gathered in the fairway for our first approach shot of the day … into a green where the hole was cut on the left collar. A daunting task was made easier when a teammate stuck his approach to about 2 feet, making the putt on the fringe a tap-in. 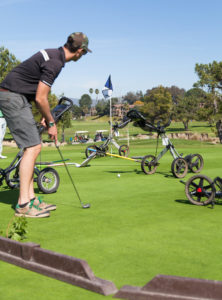 Our second hole called for groups to skip the drive and approach shot all together, prompting us to meander onto the green for a putting course.

An approximately 100-foot winding, twisting, puzzle-piece of a putting course was set up with little margin for error. We somehow made it look easy. Eagle. Must be the beers.

The next three holes featured a hole cut on the spine of a green, a par 3 with an entire pine tree’s worth of debris thrown across it and a flagstick in which there was no hole, but rather an arrow pointing to the actual cup 50 feet away. “April Fools.”

No. 13 was “No Clubs Allowed,” where we all brought out our best Tom Brady impersonations, tossing golf balls 80 yards to the green. Oh, and then used our feet to kick our putts in. 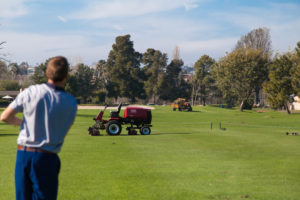 Sticking to the script of hilarity, we would come across an interesting and potentially expensive tee shot as we gazed at St. Mark GC’s entire fleet of fairway mowers parked in the landing zone.

“Break It You Buy It,” stated the tee box sign. Good thing we were near the parking lot for a quick getaway. But after four tentative driver swings and no sound of destruction – we were in the clear.

It being 75, sunny and rather perfect, our next hole was fitting for the beach weather.

Skipping the tee box and going directly to the fairway bunker, we were told to 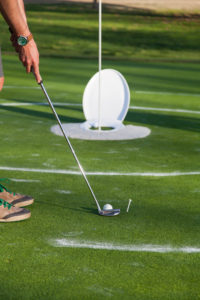 dig in and take our tee shots from the center of the bunker. Only 210 yards out. We all agreed this was a solid way to speed up play in the future – just go to where you know the tee shot is going to land, play from there and be back in time for dinner.

A few jumbo sized tires here, 50 electrical flags there and a toilet seat obstructing putts rounded out the madness. Our group was broken, tired and hoping for leftover burgers. Yet, I still made a point of asking the pro shop if they’d replicate next year.

A wily smirk and nod of the head gave me crystal clear insight into the grounds crew’s evil psyche.

“They live for this.”