This past summer, Fox Sports’ lead college football game analyst, Joel Klatt, traded the gridiron for the greens, debuting as a reporter for the network’s USGA championship coverage. Klatt served as a reporter for the U.S. Open, U.S. Women’s Open and U.S. Senior Open championships, conducting post-round interviews with players and special guests. An SCGA member playing out of Shady Canyon GC with a crisp 0.2 handicap, Klatt is also a record-setting quarterback at the University of Colorado and a high school baseball standout drafted by the San Diego Padres. We caught up with the athletic-phenom-turned-broadcaster to talk on all things Fox and SoCal golf.

FORE: Joel, you have an incredible athletic background. If you had to rank your three standout sports as far as passion and enjoyment, how would they fall?

KLATT: Well, number one would be football. My dad was a high school football coach and I grew up around the game. I just love it. However, that’s followed very, very closely by golf. To say I’m a golf enthusiast is putting it lightly. It’s where my competitive energy flows these days. As for baseball, I think the passion left as I drove away from the Padres spring training complex in a Toyota Tacoma about 20 years ago.

After your first U.S. Open in your new role with Fox, what were your takeaways? How about some challenges you didn’t expect?

One of the challenges I quickly realized was about preparation. I didn’t know exactly what to prepare for, so I ended up over-preparing. It became very apparent almost immediately that this role is virtually a 100 percent reactionary role. While the preparation helps, it’s only about one to two percent of what you’ll use during a post-round sit-down. The biggest eye-opener was realizing how perfect the role felt because you’re required to just pay very close attention to what’s happening — which is what I have done anyways as a fan. I watched every minute of our broadcast and that helped me more than anything.

How about just being at Pebble Beach? I’m sure it wasn’t your first time on the property but how about for a U.S. Open? Ever able to pinch yourself?

It was only my second time on property. I was there last year as part of the U.S. Amateur coverage. Once you’re on property, you pinch yourself regardless of it being a normal Tuesday, or Saturday of the U.S. Open. It’s such a magical piece of property. I’m sitting there watching a monitor and I look behindme and there’s Stillwater Cove, Carmel Bay and waves are crashing against the 18th. I’m just a kid from Colorado with two schoolteachers for parents, so I don’t really understand how I got in this position. I’m very thankful.

Many believe that Fox set the golf broadcast bar at an all-time high with this year’s U.S. Open coverage. There were certainly some skeptics when the contract was signed, but there’s no question Fox has grown into a major player. What should we continue to expect from your team?

From the beginning, we understood that the broadcast was going to be better year over year. I think this year was our best broadcast to date and I think you’d find a lot of people who agree with that sentiment. If you take that trajectory, you can continue to expect improved broadcasts for years to come. Golf fans can bank on Fox always being aggressive with technology. In fact, I think Fox changed the way golf is televised. I watch golf every weekend of my life and I can tell you since five years ago (when we secured the USGA contract), the amount of shot tracers, shot trackers and microphones on the course has drastically increased across all broadcasts. It’s incredibly exciting for your regular golf fan, and a very proud realization for all of us at Fox.

What are the differences between calling college football and golf?

Well, there are virtually zero similarities. The pacing and structure of the broadcast is a polar opposite, for starters. The timing you need to get comments in and then get out is totally different. During a college football game, trying to keep pace with up-tempo offenses can prove a challenge when attempting to voice cohesive points. In relation to football, golf is unfolding at a snail’s pace, so you have ample time to sit and think about the implications of each shot and each moment.

You’re an SCGA member. We love seeing that you post all those scores. Do you enjoy tracking your handicap?

I do, I really do. I wish I could throw a couple of higher scores into the file. I have to tell you, it’s not easy on my wallet giving all these strokes away. I believe in posting every round, regardless of the number, so my handicap is legit. Unfortunately, I don’t always believe that’s the case. If one more 15-handicap fires a 78 on me, I’m going to really lose it! 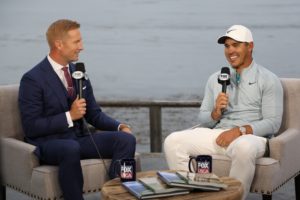 What are some of your favorite tracks to spin around on?

I’m a member at Shady Canyon GC in Irvine, so that’s the home course. It’s a great place and it’s lowered my handicap immensely due to their all-around practice facilities. Other than that, I’ve had the chance to play Riviera CC a couple times and, in my opinion, nothing com-pares. It’s one of my favorite tracks that I’ve ever set foot on. May be crazy to say … but I actually think it’s underrated.

What’s the best part about being an avid golfer in Southern California?

You can’t say weather because that’s a given. It’s the quantity and diversity of the type of golf you get to play. You go to other parts of the country and all the courses look and feel the same because only one or two types of grass grow in those regions. Whereas here in SoCal, we have all sorts of base grasses and different types of greens, chipping areas, rough patterns and even desert. The diversity of the golf here is something that I love so much.