Profiles
Home›Profiles›Lizette Salas: Giving Back To The Game She Loves

Lizette Salas: Giving Back To The Game She Loves

In the effort to grow professional women’s golf, LPGA Commissioner Mike Whan has gone global. You can see it in the first month of the tour’s 2014 schedule — Bahamas, Australia, Thailand and Singapore. The tour didn’t play a round in the U.S. until March 20 in Phoenix.

It may sound glamorous, but if you’re on the Tour it means 14-hour plane flights, strange courses, different languages and exotic cuisines. For all the glamour of playing in the tropical heat next to the Gulf of Thailand, there’s the drain of time changes and rental cars. All while trying to make a living.

And yet, nearly every chance she gets, no matter where she was on Sunday, on most Tuesday nights when Lizette Salas is back in the States she can be found in her hometown of Azusa, Calif., a gaggle of adoring children surrounding her. 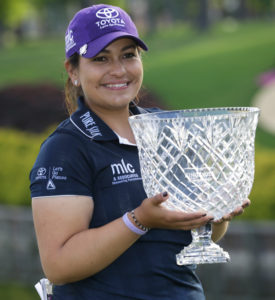 On those nights, 70 children show up for a golf clinic spearheaded by Salas. Of the 300 kids registered to participate, industry analysts would say few come from the “golf demographic.” Racially diverse, lower-middle class and many with single parents, these kids from Covina, Irwindale, West Covina and East L.A. gather at Azusa Greens Golf Course or the nearby Rancho Duarte executive course to learn a game they can play for the rest of their lives. And in so doing they get so much more.

Jerry Herrera, the long-time pro at Azusa Greens and Rancho Duarte, notes that the camp is not free. To get in, children aged 8 to 18 must pay $1. They hit golf balls but also sit and listen and learn. Participants are exposed to teachers and tutors who can help them prepare for college-preparatory classes in high school. Mock tests for the SAT are held. Nutritionists expound on good diets. Fitness experts teach stretching and proper physical preparation. And the person exemplifying the benefits of the game is Salas, the first in her family to attend college, which she did on a USC golf scholarship.

“She’s traveling all over the world, and yet she finds the time to come straight out to the program,” said Herrera. “She flies in from Asia and Europe and she’s there the next day for the kids, always there supporting the program.”

“It’s my home away from home,” Salas says of her camp appearances. “I just find it very peaceful.”

Ramon Salas can fix anything — a mower, a balky sprinkler head and even fungus on the greens. At Azusa Greens he’s listed as a mechanic, but he’s one of those employees known as “indispensible.” One day, his youngest of three daughters came to work with him. And that’s how Lizette got introduced to golf.

Herrera started teaching her at age 7. Needless to say, it took. “It was something about the individualism, how it came down to you and the preparation,” Lizette Salas says. “It was the work you put in and the patience that got you somewhere.”

Located near the San Gabriel Mountains, the Azusa Greens course isn’t too long for an aspiring golfer yet offers diversity in elevation and topography changes. “No two holes are the same,” Lizette points out. It also has a great short game practice area. After hundreds of hours of practice, countless rounds and endless solo time sharpening her greenside touch, Lizette developed into one of the Southland’s best junior golfers.

She became a Rolex Junior All-American in 2006, helped the SoCal team win three SCPGA Toyota Tour Cup events, won the CIF Southern Section individual title with an 8-under—64 and then went on to win the individual state title at Red Hill CC.

At USC, her career continued to climb: Three career wins, was the Pac 12 conference’s Freshman of the Year in 2008, earned first-team National Golf Collegiate Association’s First Team honors three times and ended with All-American honors for all four years in school, the only USC student-athlete to achieve that distinction. And she has a degree in Sociology.

Salas turned pro in 2011, won on the Symetra Tour, earned her LPGA card in 2012 and won for the first time in 2014 at Kingsmill, Virginia. She’s 25, has an eye-catching $1.5 million in winnings next to her name, and yet she’s still Lizette.

“She’s just a wonderful person,” Herrera adds. “It’s not just golf. It’s about community. She’s very sincere, dedicated. You know golf is a career that all kids, whether male or female, try to attain — to be on Tour and be the one percent who makes it. Now she’s traveling all over the world as an ambassador. And she’s so easy going and she enjoys friends and family and people in general.”

“It was my dream to host a junior golf program in my home town, and it was my dad’s dream, too,” Salas says of why she started the golf camp. “I guess it’s my calling to help kids and help them grow, and what better place than to do it in your home town?

“My family,” she continues, “felt this game changed our lives. These kids (in camp) don’t have to be pro golfers but we want them to have a quality experience through teaching and playing. We have team play and team uniforms in league play. One kid was shyest in his class and he became the high school MVP in his first year in high school.”

That’s what makes Salas smile: golf as an avenue of options.

“The kids growing up in this area have that stereotype that golf is for older, wealthier people,” Salas says. “That it was not in our nature to pick up a golf club. Golf still is expensive, and for a middle-class working family it is not that affordable. So it’s not that approachable for them.

“It takes 45 minutes for a youth baseball game. Golf is closer to five hours so as a kid learning to focus that long can go a long way as a life lesson. At first for me it was about working towards little goals like that. I was a shy little girl and then I started winning and getting those milestones. I became a confident person, not only in golf but in school and with friends.”

“The sky is the limit for her,” says Jim Gormley, the head pro at Palos Verdes GC who serves as her teacher. “She’s been as low as No. 10 in the world. With the way it is with the women’s Tour and the players traveling the world, it’s now about her to pick and choose her schedule.”

Gormley, an unofficial USC women’s assistant coach, fine-tuned Salas’ putting stroke and tightened her swing a little. Then he marvels at her world-class touch around the greens.

“Her short game is amazing,” Gormley says. “Great putting, but greenside she’s most impressive. And all I wanted to do was give her more options. To do that we put another wedge in her bag.”

The next 10 years are going to be telling for Salas. As a professional athlete, the first priority is to take care of the body. A sore hip forced her to leave the U.S. Women’s Open after one round. But it’s also a lifestyle that requires a lot of support. Yes, the money is nice, but it can be a demanding, lonely existence.

“For me to make a mark on this Tour is to win as much as possible,” Salas offers. “But my overall goal is to be the best in the world. I want to improve little by little; it’s just a process. It’s just knowing who can bring that optimistic attitude and who can help you. I want to be a happy person and accomplish my goals. That means a lot of Solheim Cups and many more wins. But in the end it’s really just trying to grow the game and leave it better.”