Getting Wiser: The Meteoric Rise Of Aaron Wise

When Lake Elsinore’s Aaron Wise announced before the close of his sophomore season at the University of Oregon that he’d be turning professional after the Ducks hosted the 2016 NCAA Championships, there were those who questioned the wisdom of such a choice.

Today, still less than a handful of years removed from his graduation at Santiago High in Corona, Aaron has undoubtedly proven himself the Wise one.

Vying for Rookie of the Year honors on the PGA Tour, Wise’s torrid career trajectory has taken on a dreamlike arc.  After grabbing the NCAA individual title and leading Oregon to its first-ever team crown, Wise would find victory in his third pro start with a win at the Syncrude Oil Country Championship on the Mackenzie Tour – PGA Tour Canada.  Less than a year later, Wise grabbed a Web.Com Tour win at the Air Capital Classic in Wichita, securing his PGA Tour card for the 2017 – 18 season.

Entering his rookie campaign with eight Tour starts already on his C.V., Wise wasted little time pressing forth among the big boys, authoring a T-13 finish at the RSM Classic in November, a T-17 at the CareerBuilder Challenge in January and tie for 15th at the AT&T Pebble Beach Pro-Am the month ensuing.

The stated winter performance, however, all seems a mere prologue for the storytelling to follow.

In early May, Wise grabbed national subheads with a superb T-2 showing at the Wells Fargo Championship in Charlotte, finishing two strokes behind winner Jason Day. 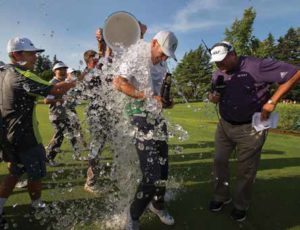 “In a way, sometimes I need to sit back and I’m a little shocked by how far I’ve come; I’m only supposed to be graduating from college now,” Wise said in the days before competing in A Military Tribute at The Greenbrier.  “By no means did I expect to execute as well as I have.  And it’s been a lot of reassessing goals, because I’ve achieved them so fast.  So I keep setting new goals, which is a good problem to have.””

In an interview with FORE at the close of 2016, Wise, runner-up at 2015 SCGA Amateur Championship at Oakmont CC in Glendale, remarked that his biggest adjustment to pro golf was learning how to manage his time.

His thoughts in reflection?

“I’ve learned that I didn’t know how to handle time back then,” Wise laughs. “It’s funny how I look at what’s on my plate now and how I’m handling it, and reflect back then . . . if I was doing what I do now, it would have been so much easier.  But you learn on the go.”

Wise’s late spring blossom proved more than simply a young player finding his way, as the rookie’s manner in which he performed also seemed to belie his years.  His showings at the Wells Fargo and Nelson vaulted Wise into the crowded conversation of top American stars under 25, while the T-2 and ensuing win concurrently saw Wise rise into the top-30 of the FedEx Cup standings.

“I just kind of had everything clicking,” Wise said of his May play.  “My iron play was incredible, which is what my coach and I had spoken about for a while; that was the part we needed to step up.”

Wise saw Trinity Forest as an opportunity to exploit the course’s Tour nascence, along with golf’s greatest muscle.

“The fact that it was a new golf course (on Tour) didn’t give anybody an advantage; so that allowed me to think my way around and beat everybody with my brain and not just go out there and flat-out beat ’em with my golf clubs,” he said.  “It was a big thinker’s course, in my opinion, because you really had to know how far your ball was going and how far it was going to bounce; there are cross bunkers that you just can’t hit it into, and I think we did a great job of managing that all week.”

His maiden Tour campaign suddenly a national story, Wise found himself dealing with the din of success, as he’d follow his win with three consecutive missed cuts, including a short week at the U.S. Open.

“A little shocking, a little bit of a learning curve and just dealing with all those eyes on me, because I’d never had that,” Wise explained.  “And I also went too far with what I was doing with my swing; I’d been working on getting some depth in my backswing, and it was great for a period of time, but I think I was starting to overdo it.  I went through the optimal zone and too much to the other side.”

Not that the MCs didn’t come without their own lessons.

“To miss three straight cuts, I learned that I could deal with a lot of people and play with a lot of eyes on me,” said Wise.  “I mean, I had cameras following me during my practice round, and I’d never had that before.”

Entering the homestretch of the season, Wise said his Tour education has been more valuable when playing in the spotlight, instead of heading home early.

“People say they learn more from the losses; I don’t know if I totally agree with that.  I try to learn from every situation, and from the T-2 and the win, I definitely learned that I can handle that kind of pressure,” he said.  “Those two events taught me a lot about myself.  That’s close to the most pressure you can get in golf, so to go out there as play as well as I did in Charlotte is what gave me the confidence at the Nelson to know I could do it again and go out and win.”

Among the seasonal goals Wise referenced, a “Rookie of the Year” nod is among his top aims.

“But I’ve still got a long way to go,” he added.  “There are some other rookies playing really well, so it’s close.  I’ve got to do something to separate myself; I don’t have a lock on it.  If I won one more, I think it would go a long way to locking up a lot of my goals.”

Should Wise indeed claim the Tour’s ROY crown, the feat is no doubt one which would shine bright across the Southland.  With Rickie Fowler’s ROY honor in 2010, Wise could become the third former SCGA competitor to capture the award in less than a decade, as said accomplishment would follow that of last year’s winner, 2014 California Amateur Championship victor, Xander Schauffele.

“Xander is a great guy; he’s awesome, and I’m so proud of him for doing all that he did last year,” said Wise, adding that fellow SCGA alum Beau Hossler is also a confidant.  “I see Xander at tournaments, pick his brain, and if I could become the second consecutive SCGA guy to do IT, that would be awesome. It all speaks to the powerhouse being turned out in Southern California.”

Concurrent to the burgeoning playing paths of his young SoCal peers (Schauffele is 24; Hossler is 23), a brief, reflection of life choices, finds it almost crazy to consider that Aaron Wise could be donning a cap and gown this summer instead of starring on golf’s biggest stages.

“It’s been in a way a dream come true, and just incredible how fast it’s all gone,” mused Wise.  “When I came out (of Oregon) just two years ago, I didn’t really have any expectations; I just knew I was playing really well in college and ready to take it to the next level.  The track I’m on has just been amazing: to go to Canada, win there; move on to the Web, win there and move on; then go to the PGA and win has all been amazing.”

In the sporting world, the tenet of experience usurps the lessons of age.

“The lucky part for me is that I just turned 22,” concluded Wise. “So if I’m going thru all the learning curve this early, it can only serve me well down the road.”