One of the most rewarding parts of awarding 43 SCGA Junior scholarships is sitting back and watching the paths each scholar decides to travel. SCGA Junior provides the means, but it’s up to the individual to complete their individual missions.

SCGA Junior Scholar Hansel Suharli has blazed himself a unique path. After transferring from Fullerton College, Hansel began his junior year at University of California, Berkeley earlier this year. The Business Management major not only serves himself in the classroom, but also is preparing to serve his country once he’s out of it.

The Fullerton native is heavily involved in the Air Force Reserve Officer Training Corps (AFROTC) and will attend Field Training this summer. In similar fashion to many golfers, a family member turned Hansel onto the idea.

“I never really considered joining [the AFROTC],” said Suharli. “My biggest inspiration was my brother. I saw how much he enjoyed it and it opened my eyes to this route.” 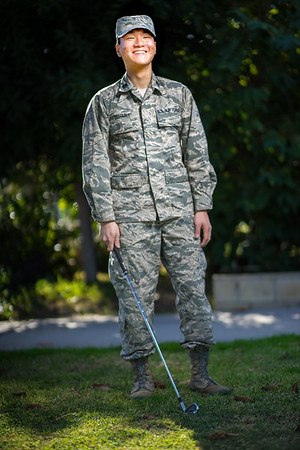 Once accepted into college, a student is allowed to enroll in the AFROTC. A four-year program, students begin their training immediately with the end goal of being commissioned as a second lieutenant upon graduation.

The AFROTC offers scholarships to a certain percentile of its cadets by providing monthly living expenses – all based upon merit.

“Slowly this became a great way to pay towards college,” said Suharli. “It’s a byproduct of enjoying the program and wanting to learn more about the military.”

Hansel wants to keep his options open upon graduation. He tells stories of those who’ve come before him saying they will serve the mandatory four years and then be done, only to still be enlisted 25 years later. The same goes for those who expect to be military lifers, only to find themselves back in pedestrian occupations.

“When I first thought about the military, I was a bit confused about the options,” said Suharli. “But now I understand there are so many other career opportunities that are similar to civilian jobs. It’s the bigger picture that got me excited.”

And when Hansel talks big picture, he truly means it.

“Space exploration is where my interest has peaked the most,” Hansel explained. “The military has a huge hand in the Mars exploration and I hope to play a hand in that someday. My sci-fi dreams are becoming a reality.”

While SCGA Junior has yet to colonize a planet, its Golf Pass program aims to bring affordable opportunities to Southern California youth golfers here on earth. Hansel, an avid user of the program, understands the obstacles of the game firsthand.

“The financial barriers of golf are difficult to many aspiring golfers,” said Hansel. “I remember when I was back preparing for tournaments and kept thinking if it was sustainable long-term. To have the assistance of SCGA Junior is what allowed me to keep going.”

As Hansel has seen the SCGA Junior Programs grow, his gratitude has as well.

“Seeing all the new programs that foster new golfers,” said Hansel. “It’s something you can’t get everywhere. I have a new appreciation towards helping new golfers.”

Hopefully we’ve found our liaison to bring an inter-universal Golf Pass to galaxies far away.