Profiles
Home›Profiles›Getting it Wright: 50 Years After the Finest Four-Year Stretch Professional Golf Has Ever Seen, a Look Back at the Career of Mickey Wright

Getting it Wright: 50 Years After the Finest Four-Year Stretch Professional Golf Has Ever Seen, a Look Back at the Career of Mickey Wright

The debate as to who is the greatest male golfer of all time is a robust one, with a certain Southern California native with 14 major titles to his name factoring heavily into the mix. But on the women’s side, there is little doubt. The greatest female golfer of all time was absolutely a Southern Californian: San Diego native Mary Kathryn (Mickey) Wright.

Born on Valentine’s Day, 1935, Wright was the daughter of an attorney father who introduced her to the game of golf at age 11. Her initial instruction came from La Jolla CC professional Johnny Bellante, but she generally credited longtime San Gabriel CC pro Harry Pressler as the man most responsible for helping to develop her long and elegant swing — even if some small geographic obstacles (i.e., Pressler being based in Los Angeles) had to be overcome for him to do so. But properly schooled, Wright blossomed quickly, reaching the final of the second USGA Girls’ Junior championship as a 15 year old in 1950, then winning the title two years later by defeating Barbara McIntire at the Monterey Peninsula CC. 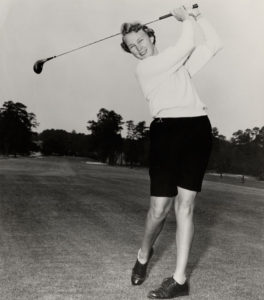 An intelligent young woman with many non-golf interests, Wright then became the first of several elite golfing prospects (a list later joined by Tom Watson, Tiger Woods and Michelle Wie) to pursue their higher education at Stanford University, where she studied psychology. During her one year in Palo Alto, Wright reached the final of the 1954 U.S. Women’s Amateur (losing to Barbara Romack in Sewickley, Penn.); and tied for fourth — easily claiming low amateur honors — at that year’s U.S. Women’s Open at Salem CC in Peabody, Mass.

But as Woods and Wie would do decades later, Wright opted to turn professional well shy of earning her degree, and made her first appearances on the then-fledgling LPGA Tour in 1955. Her initial victory would come at the 1956 Jacksonville Open but the first signs of the greatness to follow were displayed in 1957, when she defended her Jacksonville title, pocketed two additional wins and finished third on the LPGA money list. In 1958 she upped the ante by winning five more tournaments, but this time two of them were majors: the LPGA Championship (where she routed Fay Crocker by 6 strokes) and the U.S. Women’s Open, a 5-shot runaway over Louise Suggs.

The following year saw a successful defense of her Open crown, plus three additional victories, while 1960 included another LPGA Championship (a 3-shot triumph over Suggs in French Lick, Indiana) as well as five additional wins and the number two spot in earnings.

AND THEN WRIGHT GOT SERIOUS

Beginning in 1961, she kicked off a stretch of golf which must rate with any four-year run in the game’s competitive history. For in each season she led the LPGA Tour in wins, earnings and scoring — a neat trifecta to be sure, but one which has been historically overshadowed by the sheer volume of her victories.

Indeed, from 1961-‘64, Wright racked up annual win totals of 10, 10, 13 and 11 and, perhaps even more remarkably, hoisted the trophy in more than 41 percent of her LPGA starts. Further, she added another eight major titles to her list, a striking number by any standard, but one which becomes even more so when we consider that she actually managed two career Grand Slams just within this four-year window! In recognition, Wright was named the Associated Press’s Female Athlete Of The Year in both 1963 and ’64, and was elected to the Hall of Fame of Women’s Golf in the latter year — at the ripe old age of 29.

Wright’s decline began in 1965, a year in which foot problems limited her to 11 starts, two of which were victories. But while history records this physical malady as a primary source of her gradual withdrawal from the competitive scene, there is ample evidence to suggest that she simply tired of the travel, the limelight and the pressures incumbent to being, unquestionably, the game’s best female player.

With a return to college (this time at Southern Methodist University) serving as one more distraction, she still managed to corral another six victories in 1966, and would actually claim a total of 15 titles (in only 55 starts) between 1966-‘68, but thereafter Wright was strictly a part-time player. Yet despite growing physical ailments, she remained capable of competing at a startlingly high level, actually taking her 82nd win — wearing sneakers — at the 1973 Dinah Shore (a decade before it was knighted as a major championship) and, at age 44, losing a five-way playoff to Nancy Lopez at the 1979 Coca Cola Classic. 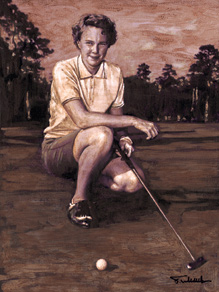 Wright’s low-key, somewhat introverted personality has often been noted, but her most historically memorable attribute — by miles — was her golf swing. For at 5’9” she possessed a long and yet highly compact move, a motion which generated tremendous power via a tight right elbow, a straight, lever-like left arm (which bore more than a passing resemblance to Ben Hogan) and, in the words of the great writer Herbert Warren Wind, “the same decisive hand action that the best men players use.”

It was a swing that allowed her to dominate in the long game (she was the rare woman to effectively utilize a 2-iron) but also gained her a reputation as the finest all-around shotmaker of her day. Indeed, it was a swing which both Hogan and Byron Nelson independently cited as the very best they’d ever seen.

AND THEN THERE ARE THE NUMBERS

Wright won 68 events during the decade of the 1960s, three major championships in 1961, and held all four LPGA majors simultaneously during 1961 and ’62. She shot 62 in a tournament in Midland, Texas, in 1964 (it would be 27 years before an LPGA player would equal it) and her 13 wins in 1963 remains the tour record. She also won 13 major championships — technically second all-time to Patty Berg’s 15, but seven of Berg’s came against scattered fields prior to the 1950 founding of the LPGA.

Most impressive, perhaps, is a simple comparison with Kathy Whitworth, whose 88 career wins remain the all-time American professional record (bettering Wright by six). For it took Wright 19 seasons and 336 starts to claim her 82 titles while the ageless Whitworth required 32 full seasons — and a staggering 733 starts — to collect her 88.

With all this evidence can anyone credibly dispute that Wright, who was inducted into the SCGA Hall of Fame’s inaugural class in 2007, is the greatest woman golfer of all time?

We’ll leave that last word to Wright herself on that subject. In a 1976 interview with Golf Digest she predicted that eventually “All my records will be broken.”

Perhaps. But nearly four decades later, nobody has even come close.