Counting his Blessings: The long and winding road of Denny Kovacs

When Denny Kovacs hits the road for a round of golf, he always takes his “Bible” with him — a three-ring binder about five inches thick, jammed with laminated sheets filled with personal golf statistics. And at the end of the day, he’s got another entry to make, another chapter to write.

In the very near future, the Indio resident, golf shop assistant at Indian Springs GC and native of Ohio will take out his Bible and log the entry marking the 700th golf course he’s played along the way.

“I try to make each hundred significant,” he says. “At 600, we went to Primm Valley, and then went on to Vegas and played two more. Now that I’m on the cusp of 700, we’re trying to figure out where I’m going to do that. I’d like to do it somewhere really special.” 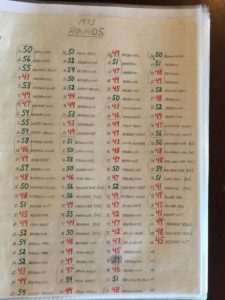 Kovacs, 67, played his first round of golf in June 1971 at the age of 24. Like many players, he immediately realized easily collectable data was available from each round, data that could help document his progress — or lack thereof. He saved the scorecards from his first few rounds, and has been able to chronicle his data from the very beginning. By the end of 1971, he had 30 scores recorded in his folder.

As time went by, Kovacs began to expand his database. He began to record his birdies, eagles, pars, bogeys and so on. He documented other personal bests, such as longest holed shot, and longest putt holed. And of course, there were the strokes, the number building round after round.

Soon, Kovacs realized he was not only accumulating data that would reflect his playing arc, he was also notching a significant number of rounds at different courses across the country. He became aware of this particular stat just as he was approaching the 300-course mark, and has since made notations after passing the 300, 400, 500 and 600-course mileposts.

“I was on a course one day,” he tells, “and the ranger came up to me and said, ‘That guy in front of you is playing his 500th golf course today. He’s a retired doctor from Florida.’ And I thought, ‘Wow, I like that number. I’d like to play 500 golf courses someday too.’ So I said, ‘Let me get to 300 first.’ And thankfully Michigan, per capita, has more golf courses than any state but Florida and California. So by the time I left Michigan for California, I’d played 261 courses.”

His folder became “The Bible” over the years as the rounds piled up, and Kovacs added categories as data permitted. There are notations on the number of new courses played per year, and charity accomplishments, including playing 190 holes in 11 hours in 2006. It includes his personal Top 50 courses (Pebble Beach Golf Links is currently listed No. 1). There are hand-written notes on encounters with wildlife. It even includes projections to the year 2020, when he hopes to have played all the courses in the Coachella Valley; crested the 300-course mark in California; raced through the 800-course mark; and have played rounds in 26 states (he’s currently played in 22).

Although the monumental 700th round is in sight — wherever it might take place — it’ll just be another milestone passed for Kovacs. He won’t walk off the course that day, brush his hands together, have a couple of celebratory beverages, and put his clubs in the closet. More likely, he’ll walk off the course, make his notations in The Bible, and immediately begin to consider where best to play course No. 701.

An Enduring Legacy: Celebrating 100 Years at ...

Music to your Ears: A ringing Endorsement ...